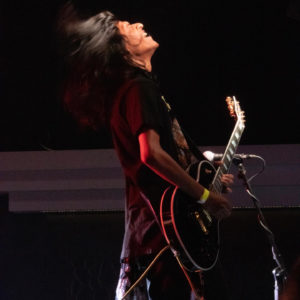 The songs are playing day and night. Some of them are tentative, while others blow the dust off the steep wooden staircase. My son is home from college for the winter holidays and nestled in his third floor bedroom with all his electric guitars—and the amplifiers. The improvisations he makes seem endless.

I felt as if I’d ridden up to the crescendo of a power rock ballad when the first dose of Moderna went into my arm. After the jab, a sweet slide of relief into feeling saved. Yet after the freedoms of late spring and early summer, the Delta variant, and now Omicron, are showing that I can’t expect the world to do what I want for it.

I could give up and live in a “what we lost” world. But there is another choice.

According to the Cambridge English Dictionary, the primary meaning of “improvisation” relates to creations of music, dance and theater. The secondary definition is described as “the act of making or doing something with whatever is available at the time.”

I have the privilege of sheltering in a home that I own during this pandemic with the company of family and the support of other good people nearby. Surely that makes it easier to think positive.

And yet, my mind turns to M.F.K. Fisher. 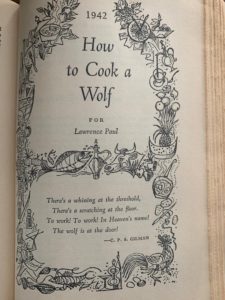 I count Mary Frances Kennedy Fisher, as she was named at birth, as one of my most important spirit guides. The barrier-breaking food writer (1908-1992), began with essays and memoirs in her 20s, when she left California to live in Europe. Fisher spent most of her life melding her literary talent with her affection for cooking and people. Her books make you want to feast and drink fine wines, but the reality is that her life was often excruciating. When her desperately ill husband died by suicide in the 1940s, she stayed in Europe, a single mother with a young child, and no obvious means of support. During this time she was always dancing on the edge of starvation, yet she found ways to feed herself and others, and wrote a hilarious book called How to Cook a Wolf with recipes for living this way that has been rediscovered and comforted yet another generation. As she writes in introduction, “War is a beastly business, it is true, but one proof that we are human is our ability to learn, even from it, how better to exist.” She goes on to say, “It is all a question of weeding out what you yourself like best to do, so that you can live most agreeably in a world full of an increasing number of disagreeable surprises.”

I live agreeably, because I am in an old house that has settled around me over like bedsheets slowly warming.  It’s an 1897 cedar-shingled summer cottage within a nine-block neighborhood within North Baltimore that was developed in the mid 1890s through the 1920s. This development, Tuxedo Park, adopted the name of an elite community in New York, although my Tuxedo Park always had considerably more plebeian occupants. The plot of land on which the house stands was bought by a woman, most likely because the developers wouldn’t sell to her husband because he owned a saloon. Tuxedo Park was just a streetcar ride away from the business life of the city, including the rough-and-tumble harbor and bustling downtown.

It’s my suspicion that dreams of outdoor socialization and leisure led to our house’s grandest feature, a three-sided wrap-around porch, and two large upstairs porches and several balconies.

I’ve spent a lot of time writing on the private upstairs porches, but rarely used the wrap-around porch. In fact, I didn’t even have furniture for it.

But this spring, I decided to set up the porch like a Victorian lady might have, with plenty of settees, chairs both for dining and lounging and a a variety of tables. Most of the shopping was accomplished from online sources recommended to me by an online designer at Decorist who provided color renderings showing where everything should go—including potted palms. I followed some of her shopping links and went to the crafters at Etsy and my storage room for other pieces—and to the garden for the four old handmade Adirondack chairs. 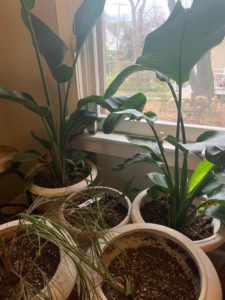 I wanted plants on the porch, which were part of the design, but I was nervous. I am comfortable with a garden full of native plants. I’ve never kept house plants, which are often exotics, alive for very long. So the first potted plants only arrived because they were gifts from friends. And these plants didn’t need much tending; they shot up with new leaves, even with my off-and-on watering.

In midsummer, a neighbor held a moving sale, searching for new owners for the dozens of potted plants that she’d tended lovingly on her building’s fire escape. I ambled over to her building with a small wagon and she agreed to sell me everything I wanted—and tossed in a few more plants for free. Gratefully, I wheeled away mature ficus and other friends, large and small, and best of all, already planted in ceramic pots with a soil blend that they liked.

Happily, the plants accepted their new home. Feeling more confident than expected, I bought some planters, potting soil, and a variety of big plants like palms and birds of paradise and citrus. Some of the plants I watered too much, and others seemed perennially thirsty.

Yes—I still had to do actual yard work with plants that lived in the ground. I pulled Virginia creeper and English ivy and set my spouse to battle invasive mulberry and Rose of Sharon. In fall, I divided the proliferating native flowers and shrubs I’ve planted in fits and starts since 2014. Coincidentally, a friend dropped by with seedlings she had no time to plant. She was also touched by desire a not to let anything be wasted. 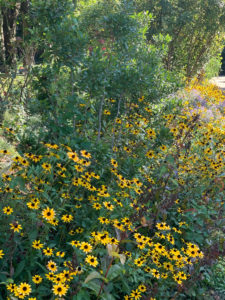 Now that I had an outdoor room, friends came over, singly or in pairs. Sharing some pie and a cup of tea felt as special as the multi-course candlelit dinners of the before times. I arranged a weatherproof dining table and chairs on the east side, which is so pleasant in the evening, especially under the fans. The fans and mosquito lamps were shut off in cooler weather, and the guests dwindled, although a last supper with Minnesota visitors bundled up in coats and hats, was fun. As we sipped mugs of soup and ate corn muffins, I thought maybe… this could happen again on a nice February day.

As summer’s warmth slipped away, I moved the plant family, now numbering 27 souls, from the porch into the house. I took an unused desktop computer off a kitchen table and loaded it with plants, which would get happy sun exposure all afternoon. More plants made a colony in the butler’s pantry with its west-facing windows. To make room, I had to re-home the vacuum and remember to take out the recycling bags—but all things considered, I’d rather look at plants than empty cans and crumpled newspaper.

I dove into the writings and photographs of a modern plant guru (Hilton Carter, who lives in the next neighborhood over!) and followed his directions to make cuttings from the most exuberant plants. Roots slowly grew. I also went into the basement and found old forgotten flower bulbs that had survived a few seasons in paper bags. I’ve planted the ones that I hope are tulips in the garden, and the ones that are clearly dormant amaryllis in pots indoors. 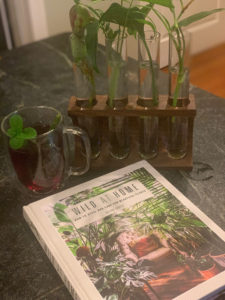 I also converted a sunroom—which had been a storage room—back into a home for plants. How ironic that the architect’s original purpose for the room would finally be restored. I wrote about how this sunny hideaway has nurtured me in a short essay for Femina Magazine. The sunroom is tiny, but it’s an utter luxury to have two walls of windows with garden views, and seasonal theater starring birds, squirrels, rabbits, and the occasional fox. 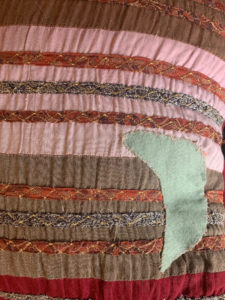 Most evenings, I hunger for an activity that was relaxing, yet doesn’t involve the printed word, or a brightly lit screen. About once a week, I settle in a comfortable chair, bringing the lamp closer, and mend. Any sweater with moth bites is fair game, seized as well as pretty pillows that had been ravaged by the dog. The hardest repair project I undertook was my early 1960s fake-fox winter coat. I’d believed its fragile satin lining was irreparable, but I knew I could never find anything like it again. What else could I do but try?

I stitched together ripped seams and patched a hugely frayed section with a colorful scrap of fabric from my last trip to India. As I sewed, I remembered several friends I knew who were sewing masks at the start of the pandemic. I think of sewing, just like baking and gardening, as being quintessential pandemic activities. And I’m unashamed that my patches don’t match the fabric. They stand out as memories of fall 2021.

The more I ponder it, the dictionary definition of improvisation seems rather limiting. I. notice that the word “improvise” shares a linguistic connection to “improve.”

When Neel makes repeated changes in his playing, he becomes more skilled. Let him be the star. I’m happy enough to have learned to sew patches and grow a plant from a single leaf. 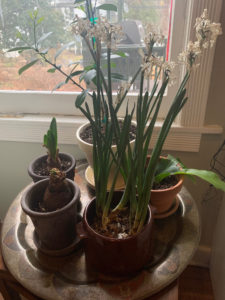 1 thought on “An Improvisational Year”