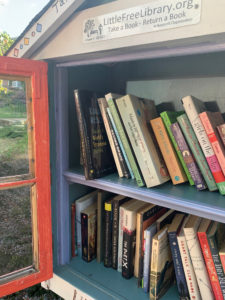 Have you ever thought about what happens to a particular book after it’s been read? Does it settle into a gentle slumber on a shelf, or a haphazard spot on the floor?  How will it continue to do its work?

I love having a house full of books; in the butler’s pantry, dining room, living room, all bedrooms, sunroom, and study. Yet even though I have space, it’s not enough, nor is it right for me to store them with limited or no future use.

Necessity forced me to shed books shortly after I’d finished college. After five happy years working at the Baltimore Evening Sun newspaper—acquiring many novels for pleasure reading—I was moving to Japan with my husband. I was thrilled. I also knew the four hundred or so books packed into my worn-out IKEA bookcases would sink the shipping allowance the Navy had provided. So, I took a deep breath and whittled down my collection. I took four boxes to Japan, and these books were a great comfort and inspiration.

My husband and I returned to the US with a few more books I’d bought in Japan. And in the three decades since coming back, we have moved house six times! And with every move, I learned to give away books, no matter how dear they were to me when I used them.

The pandemic that began in 2020 led a lot of us to clear clutter out of their homes, including books. As soon as we were in official lockdown in March, 2020, I felt called to examine the thousand plus books that had slowly crept into my home. The challenge was that it was hard to bring donations to the usual spots during the pandemic, since they were also locked down.

Hopes rose when I heard about the Maryland Book Bank. This grassroots book hub sounded like perfection: a warehouse site a few miles from my house with an open-door policy of taking all books and no-contact drop-off. That particular day I brought my books, it was raining heavily. I was anxious leaving my boxes of books beside the loading dock’s series of dumpsters that were already overwhelmed with print.

But I let those books go, and my house became a little less cluttered. 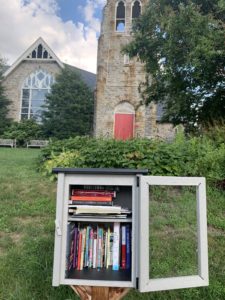 As we all know, the pandemic continued past the spring of 2020.  During the early autumn of  2021, I had the energy to examine my bookcases again, and withdrew about sixty more books from hibernation. During my neighborhood walks, I had often passed some curious structures shaped like child-drawn houses on stilts.  These cabinets, bearing labels that called them “Little Free Libraries,” were packed with donated books. The sign on the cabinet was inviting. “Leave a Book, Take a Book.”  And I thought…maybe this is another donation solution?

I went to the website for Little Free Library  and learned about the history of these intriguing cabinets, which began in 2012 when a Wisconsin man named Ted H. Bol built the first Little Free Library in honor of his late mother. The idea of “Take a Book, Give a Book,” caught on and became very popular in Wisconsin’s neighbor state, Minnesota, where the nonprofit now is headquartered. Today LFLs are common inside and outside of homes, businesses, and community centers in every state of the U.S. and more than 100 countries. And every book-box that stands is only there because of a specific person who sets it up and maintains it.

Most LFL structures have two shelves and they are not tall or wide. The LFLs can fill up fast, especially in bookish neighborhoods. I started off donating books to the LFL near a church two blocks from my home, but it was always packed to overflowing. There was no way I could pack in seventy books.

I also yearned to bring books to areas that didn’t have the same overwhelm as my neighborhood. I did more reading on the LFL website and learned that Little Free Libraries in economically disadvantaged neighborhoods didn’t get regular drop-offs. They also didn’t have many books that featured diverse people and settings.  I packed up my car with works by the likes of S.A. Cosby, Kwei Quartey, Vivien Chin, Jesmyn Ward, and so many others. 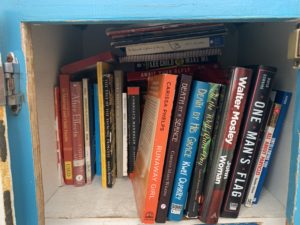 The first LFL I visited on East 25th Street in Baltimore was near a community center. The wooden cabinet was cheerfully painted in red and yellow and had a garden on its roof. What was missing was a clear plexiglass door to shield books from rain. That made it look vulnerable. Nothing was inside the library, except for two school supply bags and a bottle of cooking oil.

I slid in a donation of teenage and adult fiction by authors of color, or set in various parts of the world. A few months later I returned, happy to find the books I’d brought had all found takers. There was ample room for the extra books and school supplies I’d carried with me.

Since that first expedition, I’ve donated at many other Little Free Libraries around the Baltimore, most of them found with the help of the online mapping tool at the LFL website. And this activity of purging and sharing doesn’t mean I’m reading less. Writing historical fiction makes it essential to hunt down books that might be out of print for the sake of research. I also continue buying books to support authors who are launching or continuing careers during a time that there are few opportunities for in-person book signings.

Recently, I decided to research Sophia Duleep Singh, the“suffragette princess” who was an activist in India and Britain during the Edwardian period. Sophia, a biography written by Anita Anand in 2015, was out of print. However, Amazon listed a hardcover edition as being available for mail order from a used-book seller at a very low price. Amazingly, the seller of this former library book was…

The Maryland Book Bank! Yes, the very first place I’d gone on the odyssey with my books. 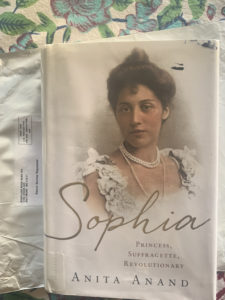