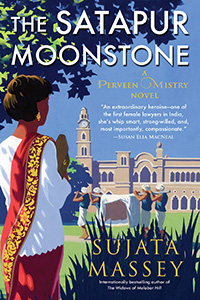 “Massey does a superb job of combining a fascinating snapshot into 1920s British-ruled India with a top-notch mystery. She has created a strong, appealing heroine who is forging her own path in a rapidly changing world… Highly recommended for fans of other intrepid women sleuths such as Elizabeth Peters’s Amelia Peabody and Tasha Alexander’s Lady Emily.”
—Library Journal (starred review)

India, 1921. It’s rainy season in the lush, remote Sahyadri mountains, where the princely state of Satapur is tucked away. A curse of deaths has fallen on Satapur’s line of maharajas. The state is now ruled by an agent of the British raj on behalf of Satapur’s two maharanis. The royal ladies are disputing the education of the young prince, and a lawyer’s counsel is required. Enter Perveen Mistry. She is determined to bring peace to the place and make a sound recommendation for the young prince’s future. Yet when she arrives she finds the palace is full of cold-blooded power plays and ancient vendettas. Too late, she realizes she’s walked into a trap…