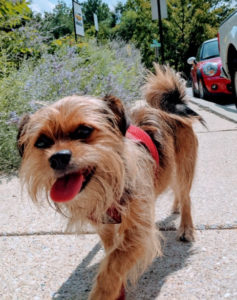 I’ve invited a special guest writer this week. Daisy, approximately four years old by the human standard, is a Yorkshire terrier mix who has become the heart of our home. I am devoting most of my time this week to rewriting a manuscript, so Daisy kindly agreed to share her thoughts with Murder Is Everywhere readers. My apologies if she runs on too long—she’s the kind of dog who does what she wants.

Greetings, gang! It’s about time Sujata let me speak for myself. I may not write books, but I like to lie on top of them and laptop computers which have no business being on laps.

I consider it one of my jobs to remind the writer I live with about reality. In the real world, dogs need to go outside, okay? And I need Sujata to know that when I stand on the back of the sofa, barking out the window, it’s because I am preventing possible crimes by other dogs and even humans. I am doing my job as household guardian. I may only be ten pounds, but I’m faster than anyone around here. 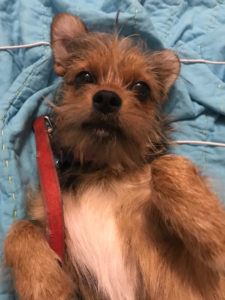 I have lived with this family since 2018, when Pia walked into the living room with me in her arms and said to everyone that I belonged to a friend of hers and was just visiting for the afternoon. Above is a silly picture she took of me during this time. You can see how much love I feel.

Ha! I kept quiet, but the fact was, she had seen my picture on Facebook because someone wanted to sell me. I lived with two other families before the Masseys. The families were too busy to take care of me, so I didn’t learn a lot of puppy stuff—except for being friendly. But in the early months of my life, I saw people fighting. I was once thrown out of a window to show how mad someone was. I don’t like to go into the details, because it’s traumatic. Because of what happened before, it was harder for me to become housebroken. I also am frightened by raised voices, and I freak out when people raise their arms high.

My new father, Tony, is a psychiatrist. He describes me as an empath. I’m not sure what that means, but it might have something to do with the fact that I look very closely at you if you might sneeze or seem very excited about something. If someone cries, I put my paws on their shoulders and kiss them until they are back to normal.

I actually was the second dog in this house. Charlie was the only dog they expected to live with. When I met him, he was a twelve-year-old, extremely quiet beagle who had almost forgotten how to play. I was about eleven months old, so I had a lot of energy and made him play with me. I teased him a lot in the early days, but he still fell in love with me. He followed me everywhere, even though I was so much smaller than him. Even though I was the second dog, I was never second banana. 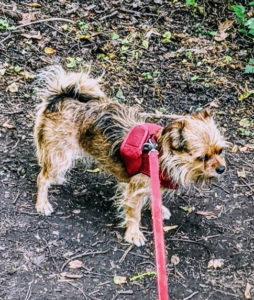 2021 was the hardest year in my life. Just as spring was beginning, my buddy Charlie died. He was getting very sick and thin and finally went to sleep in the sunshine on the deck. I didn’t know that he was really gone forever, so that first night alone, I sat on the dining table all night, hoping he would come back through the door.

A month later, Pia died. I get confused because I sometimes see girls with very long dark hair like hers, or who wear similar kinds of sweatshirts. I will always remember her letting me go off-leash outside and run. Pia liked to rev me up and made my life very exciting. I am fortunate that her brother Neel is home from college. I can snuggle with him in his room for hours. And what a room it is—often, I will find French fries or a pizza crust. It’s better than doing book promotion with Sujata. 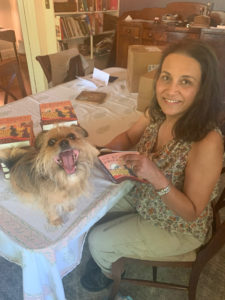 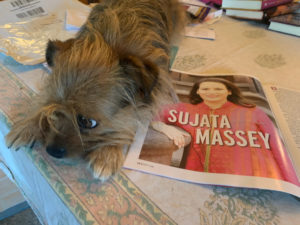 Still, I’ve been inside the house too much. Maybe you can relate? I sit next to Tony while he Zooms for work, and I get on Mom’s yoga mat when she gets into the play positions. I like yoga better than book promotion. 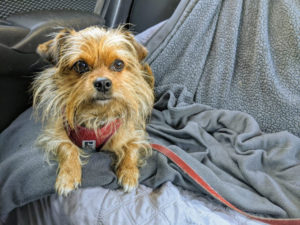 I know that dogs are very lucky not to catch coronavirus the way cats and tigers have. However, I don’t like masks. When Sujata takes me on walks, other people walking their dogs go on the other side. And that social distancing made me even more nervous about dogs than I already am. I get frightened if a dog looks at me. I have to bark back, so nothing terrible happens. 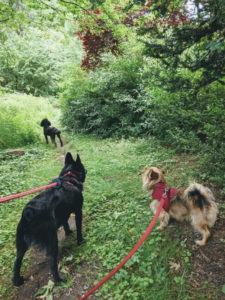 My dog walker, Betsy, is a very nice lady. She kisses and cuddles me when she visits about twice a week. I don’t care that she wears a mask, because her eyes are always smiling. Betsy started some doggy playgroups during the pandemic. I was very scared the first time I went inside my special spot in her car which was jam-packed with four other dogs who all knew each other. They were a pack, and I was the newcomer. But nobody bit me or growled. They let me join them.

Soon I was going with them twice a week, and if I could get away with it, I’d rush to the front of the pack to lead. During these walks, I visited parks and neighborhoods all around Baltimore. Occasionally my parents left home for important reasons, and I stayed overnight with Betsy and her daughter. Sleepaway camp! 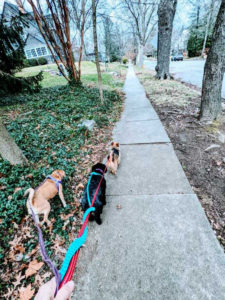 Right now, it’s the middle of winter. I believe this spring will be happier than the last one. I am already dreaming about the budding of daffodils and tulips and other lovely areas to leave some pee-mail for others. But for now, I am sitting comfortably on the radiator cover by the big window, keeping an eye out for our beloved mail carrier. I will whimper with joy when I see Tom step on our porch, and if he knows I’m here, he will wave at me.

We will have our special moment.

And at exactly four o’clock, I will jump off the couch and appear in Sujata’s study to remind her it’s time for dinner.

Love to all of you,