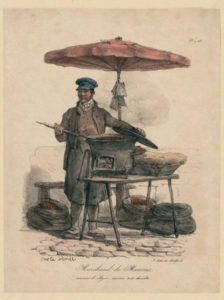 Throughout December, almonds, walnuts, pistachios, and pecans are always in my shopping cart. I first wrote about this peculiar passion three years ago, yet I couldn’t resist returning to the topic this year.  And the nuts made me contemplate whether traditions can shift a bit and still feel comforting.

This year, not as many Christmas markets are running in Germany as before Covid. For many centuries, Germany and other German-speaking countries have held Christmas markets in town squares that are filled with wooden stalls and sparkling lights, mulled wine and celebrating people. Weihnachtsmarkts sell holiday greens, ornaments, gingerbread, and a variety of roasted nuts—straight-up smoky smelling roasted chestnuts, as well as sugared, cinnamon almonds—either way, the nuts come wrapped in twists of newspaper. I remember going mad for the almonds and lead Christmas tree ornaments at the Recklinghausen Weihnachtsmarkt during a late 1980s holiday visit to Germany with my mother and sisters.

The other nutty tradition that gets me reminiscing isn’t tied to any holidays. Roasted nuts—especially peanuts—are part of the everyday street food scene in India. Walking through Mumbai, I’ve often passed vendors shaking peanuts in a giant steel bowl set over an open fire. What aromas! And just like the practical Germans so far away, these vendors shake the nuts into newspaper cones and hand them over.

Despite my overseas romances with various forms of roasted nuts, I only began roasting nuts at home in the early 1990s.I was inspired by a set of recipes for home-made spiced nuts by Julie Sahni. Such nuts seemed less perishable and safer to mail to my relatives than cookies—though I’m not going to lie, I make a lot of cookies in December, too. But nuts are the best: not only can you eat them out of hand, but you can add them to salads, cakes, ice cream, oatmeal, and pancakes. Add some chopped dried fruit and you have a trail mix extraordinaire. My family has come to expect these nuts to arrive every year. And it seems symbolic that our bicultural identity comes together in these nuts, which marry the sweet of Germany with the spicy heat of India.

As time marches on, many of us are reducing our sugar intake. Last year, I adjusted the venerable spicy nuts recipe with coconut sugar instead of ordinary white sugar. The coconut sugar didn’t make as nice a syrup with water as refined white sugar did. It was eerie, but the healthified nuts still tasted very sweet. My own threshold for enjoying sweetness had lowered.

This year, I decided to make extra batches of nuts using a few different sweeteners and to bake them in a regular oven. Because I couldn’t locate a recipe for such that called on Indian spices,   I realized this was a chance to make my own recipe. I counseled myself to be prepared for imperfect results, knowing that food professionals often test upwards of a dozen times before a winner is found.

Driving the mission was a change in sweetening from dry sugar mixed with water to an already usable syrup. The sweetener I was most hopeful about was date syrup, originally known as dibis in Iraq and other parts of the Middle East. Typical uses for dibis are drizzled over hummus, mixed into drinks, and within desserts. I would never have known about it if I hadn’t kept coming across it in healthy baking recipes this past year.

One tablespoon of date syrup has a glycemic index of 47. Putting it in context with other options, maple syrup and coconut sugar have a glycemic index of 54, honey has 58, and sugar 60. (Agave syrup is very low—just 19 on the glycemic index—but I think it tastes weird). According to nutritionists, dates are loaded with amino acids, vitamins and minerals, and antioxidants. because of the protein within nuts, my holiday guilty pleasure could turn into a life-saving holiday hero.

Step into my kitchen. Here’s what happened.

The first batch I made was three cups of nuts tossed with my usual spices and one-third cup of date syrup. I quickly found that date syrup tended to caramelize faster than expected—resulted in blackened nuts that weren’t very pretty and tasted slightly burned. I also noted (belatedly) that whole almonds are double the size of the walnut and pecan halves, so a shorter cooking time for walnuts and pecans would further protect the nuts.

For Attempt Number Two, I cut the oven time from twenty minutes to twelve minutes. I also did the extra step of splitting up the nuts on two baking sheets, with the fat almonds on one sheet, and the skinny walnuts and pecans on the other. That way, it was easier to take the faster baking nuts out when they were crying for mercy, and let the almonds linger a few more minutes.

I found myself curious about the road still not taken—another syrup that was a candidate for sweetening.What would the nuts taste like roasted with maple syrup? Would this lighter, higher glycemic index syrup be even better?

For Attempt Number Three, I took the one-third measuring cup I’d used for previous recipes. I filled half of it with date syrup from my waning bottle and then poured maple syrup to the top. After roasting, the nuts were soft and didn’t taste like much. Impatiently, I waited for them to cool to crispness before tasting.

Hmmm. The odd thing was that although the maple-date laced nuts were lighter in color and dried to a nice crispness, the taste wasn’t as deep and hauntingly flavorful. There was an umami in the date syrup and a nicely chewy caramelization that was no longer there. And being able to taste between the various batches made me decide that date syrup alone was the best. The ultimate nuts that I’m sharing with you.

Which special traditions do you enjoy that you would never change? And what have you tweaked for the better? 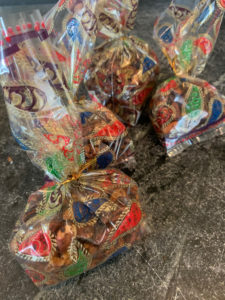