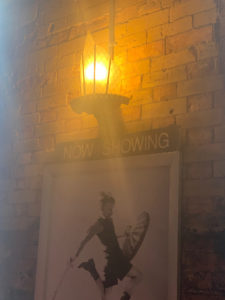 A Thanksgiving movie is as much of a tradition for me as the cooking. When I used to return from Baltimore to St. Paul, Minnesota, in November, my sisters and mom and I always endeavored to find a special film to watch at an art house theater like the late Uptown, and still flourishing Lagoon, in Minneapolis. The theater would always be packed, and we would inevitably run across old friends in the venue and go out afterward for coffee and film discussion.

Since 2020, Thanksgiving has been different for everyone. We had only two guests this year for Thanksgiving in Baltimore—our college student son and my youngest sister. We were so grateful for both of them. When they left on Saturday, life was suddenly dead. Sunday loomed large, and I asked my husband Tony if he’d like to go to the movies. 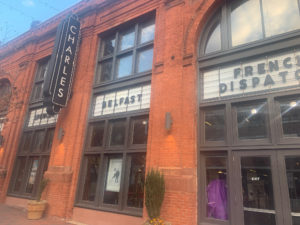 I hustled my husband off to see the new documentary on Julia Child at The Charles Theatre, an “art house theater” that is reputedly Baltimore’s oldest—dating back to 1930, although the building’s former life was as a barn housing streetcars dating back to the 1890s. The theater, a smartly renovated brick building row with Tapas Teatro, a great small-bites restaurant, is sited one block from Baltimore’s Penn Station, where we had recently dropped our son for his trip back to Boston. Driving past The Charles on Saturday surely put the notion in my brain that I must return to the movies, fear of omicron be damned. 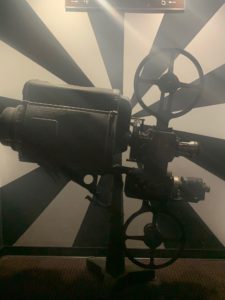 Late Sunday afternoon, a few people were wandering into nearby restaurants, but there was no queue for theater tickets. Inside, we found the ticket box just as we remembered it. However, the attendant surprised us by swiveling an iPad-like device to us showing a sea of green dots—dozens and dozens of available seats for Julia. Only four people other than ourselves were present. How weird! There would be no need for an aisle seat, or to worry about tall heads in front of us. The theater would be our living room. Masking was required, a precaution that I’m happy to oblige.

The Charles was once a small player in the city’s film scene. Through the 1960s, Baltimore was filled with independently owned cinemas, according to author/photographer Amy Davis, who created Flickering Treasures, a gorgeous photographic history book. I’ve been in many of them, which still functioned during my life as a student and young newspaper reporter of Baltimore. But of all my Baltimore theaters, The Charles makes my heart throb. On many nights from 1982 through 1986, I came with classmates from the Johns Hopkins University campus to see films by the directors we were hearing about from our then-writing seminars professor, Mark Crispin Miller.  I saw Fritz Lang’s Metropolis and Paul Verhoeven’s The Fourth Man and so many other films that are lost in my faraway memories. 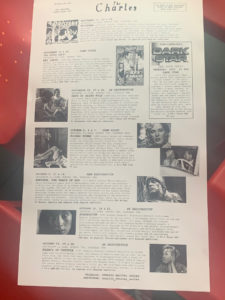 In my day and earlier, The Charles  was an inelegant, wide squat structure whose architecture was dominated by its approximate 500-seat auditorium. Between 1939 and 1958, it was known as The Times Theatre and specialized in newsreel cinema only—a precursor to television news. In 1958, The Times was taken over by another owner and became immortalized as the more elegant-sounding Charles, showing a wider range of fare. 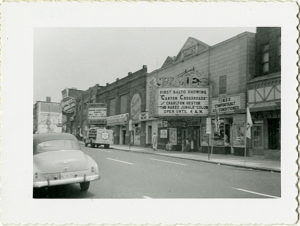 In the 1960s through the 1980s, the large room above the theater was called The Famous Ballroom and home to The Left Bank Jazz Society, which hosted musicians famous and infamous, including Dizzy Gillespie and John Coltrane. I remember taking in a show and buying delicious fried chicken, a far better refreshment the popcorn offered downstairs at the cinema.

I’m exercising my use of a capitalized “The” a bit more than usual. The Charles is that inspiring. The John Waters was a longtime friend to the theater, and reworked it to pose as an X-rated theater in his 1977 masterpiece, Polyester. Many Baltimoreans appeared in John Waters’ films, including Edith Massey—no relation—and Mink Stole, who I see at neighborhood potlucks.

Another of my Baltimore neighbors was a man named George Udel. George was a television cameraman and filmmaker who ultimately became the director of two film festivals and the Baltimore Film Forum organization. George was the fellow who could get special films from thousands of miles away to The Charles. He also became the beloved founder and host of Cinema Sundays, a one-time-only special film show with bagels, coffee, and audience discussion on Sunday mornings at The Charles.

In the late 1990s, when I had written just two novels set in Japan, George recruited me to be the discussant for an Akira Kurosawa film for Cinema Sunday at the Charles. I protested that I had no credentials or film expertise beyond a few courses I’d taken at Hopkins, but he prevailed, and I had the once-in-a-lifetime experience of standing on the big stage at The Charles and being part of the film discussion that ensued after.

George is sadly passed on from this world. He died from heart disease just few months after the theater’s grand reopening in 1999. The legendary Raoul Middleman—also deceased—painted  a massive portrait of George that hangs in the theater’s hall in a forward-facing position. Nobody going into a film misses George. 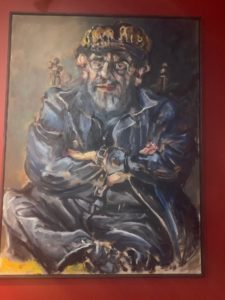 As I mentioned at the start of this blogpost, only four others were present at the 4:10 PM showing for the Julia Child documentary. Julia is also being streamed, so I hope more people can see this terrific film either in the theater or outside. It includes diary entries and never-seen photographs—including a tasteful nude of Julia shot by her husband Paul! I felt so grateful that movie theaters are continuing to keep doors open, despite low numbers of attenders. 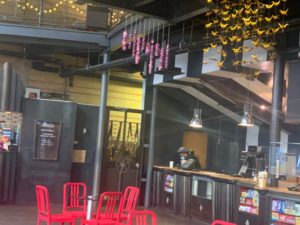 I was so warmed by my reunion on Thanksgiving weekend with The Charles that I returned alone on Monday to see The French Dispatch. This time, only two people were in the theater. By now, I wasn’t surprised by the number. My own spouse—a fellow Charles Theatre aficionado from the ’80s—wasn’t interested in this one. From the preview, it was clear that this Wes Anderson film would be long on scenery and storytelling, and short on action. A better film for someone like me to see. 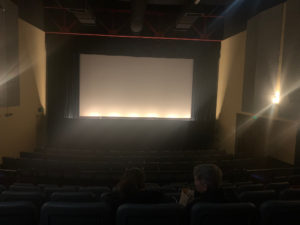 It turned out that The French Dispatch was basically a love letter to the hardworking and creative writers in the history of The New Yorker. The film was too long, but it was a charming, meandering feast for the eyes and ears. I thoroughly enjoyed laughing by myself at the best moments, which were plentiful.  The film also inspired me to renew my subscription to The New Yorker after many decades’ absence.

The two shows I saw reminded me that watching a film is as private an encounter as reading a book. That was the magical experience that George Udel believed in—why he worked so hard to bring odd and far-flung films to Baltimore.

We’d see things that we never dreamed were there.