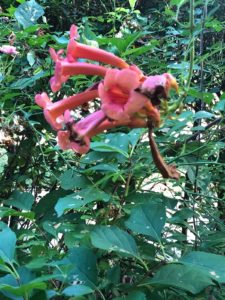 In Spring of 2017, I hired a man to dig out the grass in front of my Baltimore, Maryland house. He thought I was crazy to pay him for that, but I had the idea of replacing the grass with a lot of perennials that are native to Maryland and Virginia. I wanted to plant food for the local bees and bugs (the good bugs, of course) and have the feeling of a full, lively cottage garden. Native gardening guru friends told me this kind of garden doesn’t need much water, because the plants are used to the climate, and such laid-back flora grows happily without special attention.

I also heard a saying that was meant to encourage me: the first year plants sleep—the second year they creep—the third year they leap!

I was pleasantly surprised to see plants getting a nice, full shape the first year. But this year, WOW. I don’t really think we can pretend anyone is creeping. The mountain mint is a monster stalking the entire space! 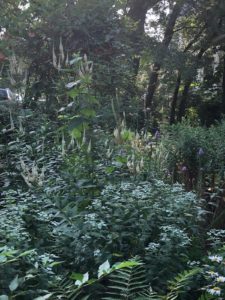 Lots of rain made these plants really grow, and it’s amusing to see my short dogs wandering through their personal jungle while bees buzz gently overhead. 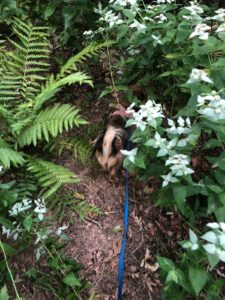 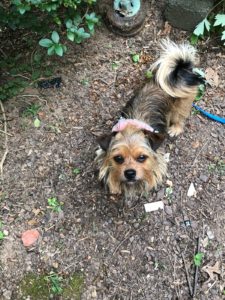 Another thing that surprised me about my impromptu native cottage garden is how long it is taking everything to flower. With these natives, varying shades of green are what I’m stuck with for a long time. I will have to wait till August to see yellow petals on these Black-eyed Susans below, and they are already approaching 6 feet tall. 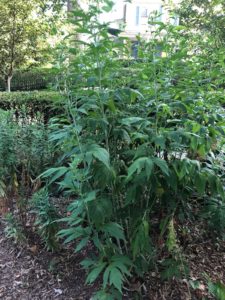 One of my goals this summer was to “be in the garden” most mornings while it’s still cool. An overdue book turned my mornings into writing sessions on the screened porch until today—July 17.

The middle of July is usually when most people stop gardening. But it’s my start date. I had a bunch of weeds to pull. 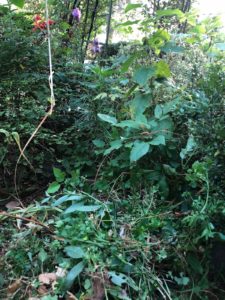 But they easily gave way. Today I did a spot-check on a Virginia Sweetspire bush advertised as “good for poor soil” that I’d planted this May. I watered it a couple of days in the beginning and then I started writing overtime and let it go without extra watering.

I think the Sweetspire, below, got mad about that. 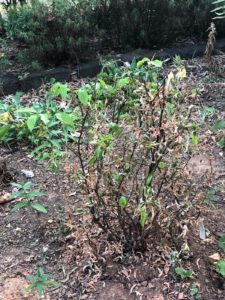 Can I make things better for the poor shrub this late in the season? And is there any point in planting anything more in the bare dry spots…or is that insane with the 90 degree heat that lies ahead?

If you ask me, is easier to plant a garden than to write a novel; but it’s more tempting to disappear in a rewrite than to pull ivy.