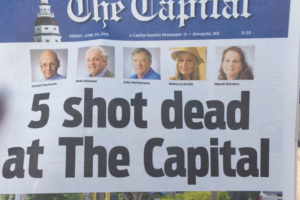 Last week’s mass shooting of the five employees at the Capital Gazette in Annapolis made headlines around the world, but especially here in Maryland. These premeditated, cold-blooded murders are a tragedy for the families and friends of Gerald Fischman, Rebecca Smith, Wendi Winters, Rob Hiaasen, and John McNamara. But the murders are alsoan attack on the culture of journalism.  Reporters walk alone into neighborhoods full of guns to investigate the suffering of people there; editors authorize the publication of stories that sometimes point out wrongdoing in  the community. This work is done as a service to the community; but there are those who disagree with it. Usually, they send a letter to the editor about it. But not always.

Such was the situation with suspected shooter Jarrod W. Ramos, who was convicted of harassing a woman he knew in high school. He then tried to sue the Capital Gazette because of a published story about the harassment. Ramos’s case was dismissed as too groundless to be tried in a court of law, but the man wouldn’t give up.  During the last presidential campaign, Ramos threatened the newspaper on Twitter for an opinion piece that referred to Trump as “unqualified.” He also used Twitter to violently threaten  the reporter who wrote about him, as well as Rob Hiaasen, who was the deputy editor.

The Capital Gazette is a very old newspaper that became part of the Baltimore Sun Media Group in recent years. The CG’s deputy editor,  Rob Hiaasen, was the first employee killed by Ramos. Before he became an editor in Annapolis, Rob was a general assignment features reporter at the Baltimore Sun when I was a features reporter for the afternoon paper, The Evening Sun.

I remember Rob as full of laughs: a funny, gregarious, and skilled writer. This New York Times opinion piece by Laura Lippman, who was Rob’s close friend, describes him much better than I can. I recall smiling at Rob’s stories and his status as the newsroom’s bon vivant.

I left the Sun in 1991, but I had the gift of an out-of-the-blue email from Rob about ten years ago.  He had read through all the mystery short stories in Baltimore Noir, an Akashic anthology published in 2006, and he wanted to congratulate me on mine. I was surprised and flattered, especially since I regarded that particular story, “Goodwood Gardens,” as being all about women. But Rob didn’t believe in stories being for ladies or gents. He read what he wanted, and he was known to praise and encourage writers whether they were in his newsroom or not.

During my years at the newspaper, I recall receiving a few nasty unsigned letters, typically filled with racist complaints about the newspaper’s coverage. Also, a local man picketed the newspaper for years holding a sign that said “Sun Lies.” I don’t know whether there was a story that bothered him, or he just didn’t like the paper.  In my five years as a reporter, I understood there would always be readers who felt wronged by the paper, but I really thought the biggest danger for me was going into deserted neighborhoods alone.

I am shocked that threats against these journalists that appeared on Twitter were not addressed by the police. I believe these threats multiply and gain traction because President Trump tweets frequently against the press, often by name, and has called the entire news media “the enemy of the American people.” With a climate like this, I don’t like imagining what will come next.