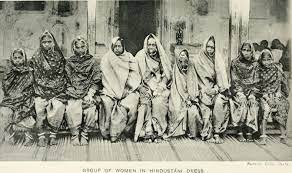 About two years ago, I started work on a new book in the Perveen Mistry historical mystery series. The beginning is a lot of fun. Searching for historical events and themes to explore is typically a magical period of big dreaming. To coax out story ideas, I reach into the messy purse that is my brain, the spot where memories and idea fragments coexist like torn candy wrappers and soiled pennies.

What I pulled out of the bag was the notion of reproductive rights. It didn’t take long for me to realize I could become passionate about writing a story that illuminated these health and freedom challenges faced by women in 1920s India. How would their choices be different than a modern woman’s? Especially if laws existed to punish those who tried not to bear children, either through contraception or abortion?

In the vintage photograph above, women of the Kurni (tilling) caste pose together for a colonial photographer. How many of the women are mothers, and how many children do this group collectively have? Surely some of them are mothers and daughters. And I wonder–do the small girls flanking the ends of the group already have husbands?

I believe that abortion is an understandable part of reproductive life—just like menstruation, childbirth and contraception and venereal disease. I haven’t shied away from writing about these aspects of women’s lives in my feminist mystery series set in 1920s Bombay. Therefore, the fourth novel in the series became the perfect entry point for my lawyer heroine, Perveen Mistry, to assist an illiterate ayah charged with the crime of abortion. Slated for publication in June 2023, tThe Mistress of Bhatia House also includes scenes with Perveen secretly reading a banned book about contraception, and deliberating over whether she should assist a contentious group of women volunteers trying to establish a maternity hospital.

Abortion law in India was created along with the arrival of the British. In the early East India Company times, criminal courts administered by British officers were set up; however, prosecutions of abortion were rare. A chief reason was that life was defined as starting at quickening: the time in pregnancy, somewhere between the fourth and fifth month, that a baby’s movements can be felt. Colonial government had greater concern about criminal prosecutions of people committing infanticide on young babies, the burning of widows, and other “easy to see” crimes. This laissez faire attitude toward abortion matched the mood of judges in Britain and the United States during the same time period, who all regarded quickening as the start of human life.

For most of India’s history, the midwife (called a dai) was the one who performed gynecological care in humble villages and bustling towns. A woman who missed a period would go to the local dai to request a herbal tea known to lead to cramping and the onset of menses.  Many women regularly drank such teas, which were even nicknamed “Wife’s Help.” Women were taught that a husband’s desire had to be obeyed, even if the outcome meant too many children to care for, or physical damage to a woman’s body from unending pregnancies and deliveries. Mitra Sharif, a University of Wisconsin professor of law and an authority on the history of law in colonial India, dives deep into the medico-legal history of abortion in a lengthy, fascinating article that appeared in Modern Asian Studies.

As Dr. Sharafi learned from researching hundreds of legal documents, newspaper articles, and books, on occasion the medicinal teas were unexpectedly poisonous, causing great suffering or even death. And sometimes, dais used sticks or other crude means to disrupt a pregnancy. Varied poisons including gunpowder and arsenic were sometimes administered to pregnant women by uneducated family members—with death as a consequence. And it wasn’t only Indian women who sought to end pregnancies. British colonial women also had the same need, and when one such wife died following an illegal procedure performed by a medical doctor in the colonial system, the case went to court.

In the second half of the nineteenth century, the British took formal control over half the subcontinent. This meant that by 1860, the Indian Penal Code was created, and it included a revised definition of the criminality of abortion (as well as homosexuality, but that’s a long story for another day).

Under the Indian Penal Code, quickening was no longer the defining factor in a baby’s viability. An attempt to end a pregnancy at any stage was considered abortion, and midwives in India were now at risk of being prosecuted as abortionists. The stress was on convicting the “perpetrators” of abortion rather than “victims”; in fact, the law was presented as protecting India’s women. In Britain and the United States, abortion was also redefined after 1860 as a more serious crime that could be prosecuted in cases where a pregnancy was terminated earlier than the fourth month.

Why did these countries have a sudden interest in outlawing abortion?

One idea floating around elite people were becoming interested in eugenics, a pseudo-scientific theory about the genetic superiority and inferiority of various races. In the US, doctors in the all-white American Medical Association advocated for the birth of more White children to form a protective block against what was perceived as a surge of immigrant and Black births—and abortion laws meant reducing numbers of Black midwives. The notion of sterilizing members of unsavory social classes in Britain was seriously considered by government officials.

In 1920s Bombay, philosophy professor N.S. Phadke lectured and wrote about some modern contraceptive methods of Europe, such as the diaphragm, arguing that bringing contraception to India would decrease the number of poor people bearing children at young ages and allow for the dominance of wealthy, higher caste people to reproduce (and successfully gain India’s freedom!). His 1927 reproductive education book, Sex Problem in India, has an introduction by Margaret Sanger. I ordered a replica edition to be made in India from a digital scan. After reading Phadke’s provocative commentary, I decided to get it into Perveen’s hands.

Eugenics were about contraception and keeping birth rates down. Abortion laws in India served an adjacent purpose by making it more difficult for dais to practice. Also, the prohibition of abortion also made it a weapon for people to use against each other. For example, unscrupulous  in-laws wishing to expel a widow from their home could report to the police shed had an abortion. Such immorality would disqualify her from continued support, and if she had any assets left by her late husband, the family could seize them. Other villains using abortion as a weapon were constables shaking down women’s families for bribes in exchange for not accusing them. Enough corrupt cases came to court that laws were passed making it a crime to falsely accuse someone of abortion.

But accusations are real, and they are dangerous. Right now, there’s an abortion vigilante law in Texas that offers cash bounties to anyone assisting the police with information leading to the arrest of a woman obtaining an abortion; not just in-state, where it’s illegal, but out of state as well.

The Texas nightmare arose two years after I started The Mistress of Bhatia House. However, I felt increasingly worried for women after Donald Trump was elected in 2016 with the support of many people wishing to outlaw abortion. In the past six years, many states passed laws that made it more difficult for women to obtain abortions in their states, and also for doctors and nurse practitioners to perform abortions. Thirteen states passed “trigger laws” to ban abortions entirely within 30 days of a Supreme Court decision overturning 1973’s Roe versus Wade decision establishing abortion as a constitutional right. The Supreme Court’s new appointees, Neil Gorsuch, Brett Kavanaugh and Amy Coney Barrett, refused to admit that they would vote to take away the right to abortion.

But last week, that’s what they did.

2 thoughts on “The “Wife’s Help”: Writing about abortion in historical fiction”