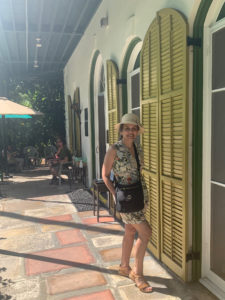 Because I love rooms almost as much as books, this is a question I’ve pondered for years.  In my childhood in Minnesota, and during college in Baltimore, I could think of nowhere better to write than sitting up in bed with the door closed: so quiet, cozy and private.

As years passed, I found that a desk was a better place to stay focused and not drift off into a nap. I wrote happily in a series of study rooms in my homes—apartment to house—until I felt too distracted by all the notes, extra manuscript pages, and books that were rising in columns on either side of my computer. Unable to concentrate, I decide to write outside the home, where the only personal property I carried was my laptop.

This shift led to some fruitful coffeeshop writing years, followed by about a year of regularly working at a table or carrel at the Johns Hopkins University library, where I enjoyed the surreal experience of being creative in a familiar environment where I’d once spent hours taking longhand notes or drafting essays. I had to stop writing in the library during the pandemic, when it was closed to all but those enrolled or working at the University. The decision made sense, and I decided to look at writing at home in a new light. After all, I was based in the largest house I’d ever lived in and no longer had small kids running around making noise. I had my own study at the top of the house, and when that got messy, I could set up in the dining room. Or how about the sunroom, so heartening in winter? In summer, I had three porches to consider.

I’ve grown back into writing at home, and I also harbor a passion for seeing other writers’ homes, whether they are dear friends inviting me for a cup of tea, or museum-owned spaces that nurtured authors I only know through books and reputation. 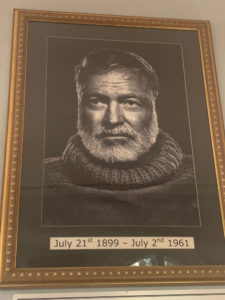 On a recent trip to Florida, I visited a writer’s home that runs on the order of truly magnificent: the 1851 French colonial house in Key West’s historic district that was the residence of Ernest Hemingway from 1931-1939, when he was in the midst of his second of four marriages. The house, and the installation of its grand swimming pool, Key West’s first, were paid for by Hemingway’s wealthy wife Pauline Pfeiffer Hemingway—although Hemingway erroneously complained that she was spending every penny that he earned. Some nerve, huh? Especially because Pauline had worked as a decorator, and for Vogue, and put her stamp on the house in many ways, including the elegant chandeliers and boldly tiled bathrooms. The house’s many long shutters are an amazing yellow color. Was it her choice?

Here’s a  photograph of what the Ernest Hemingway Home and Museum looked like during the Hemingway family’s time in the 1930s: 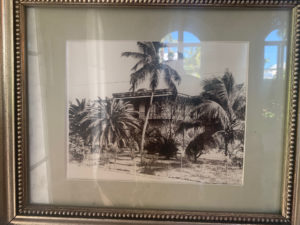 And the museum grounds are truly lush and lovely, which is par for the course in a town that feels like paradise. 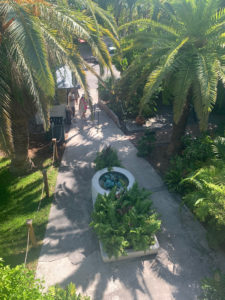 Hemingway installed a writing study on the upper floor of a cottage that connected to the main house by a catwalk. The catwalk no longer exists; but speaking of cats, they are as ubiquitous and more plentiful than the vintage typewriters in most rooms. 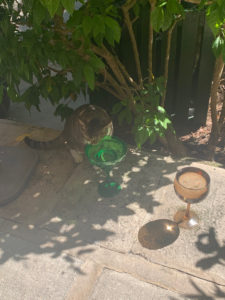 Ernest reportedly longed for one of the polydacytl cats popular on sailing ships because they were believed to be good mousers and also bearers of good luck. A captain friend gave him a pure white cat with six toes per front paw. This cat was named Snow White by his sons and became the ancestor of approximately seventy cats living on the property today, some of whom carry the same genetic trait. Most of the cats have been spayed, but not all of them, because the historic foundation running the house as a museum knows what a draw they continue to be. If you mention that you’re going to Hemingway’s House, the person who hears you will likely say, Oh! The place with dozens of feral cats! 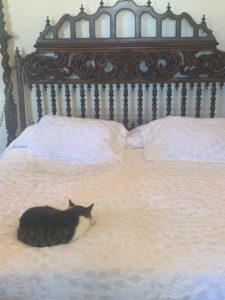 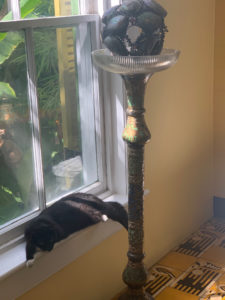 Hemingway House cats are allowed free reign to all rooms and furniture. The house has no litter boxes, and the guide explained that the staff picks up after cats all day and night. A doctor visits weekly to check the health of the cats. I always imagined a house with dozens of cats would feel overrun; but these cats enjoy spending time alone, often just one to a room or hallway. They take after writers with this habit. 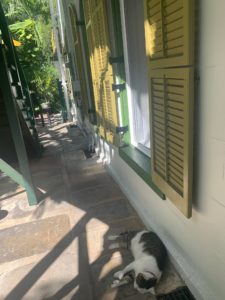 Most of the original furniture from Ernest’s time is gone, but the writing study is furnished as a stylish masculine adventurer writer’s room. Mission furniture, animal furs, and earth tones abound. Was this Pauline’s work, or someone else’s? I found the study attractive but doubted that every single piece dated from the thirties. The condition was simply too good, and the quality so tasteful. Yes, there were old books in the cases, but Hemingway’s writing study looked more like an idealized reception room to me. 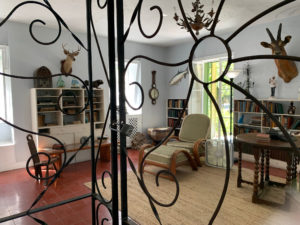 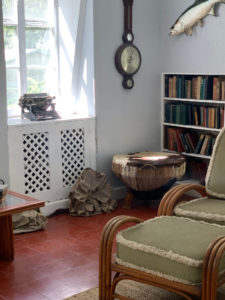 And while the air-conditioning hummed on the day I visited, I know that it couldn’t have been running in Hemingway’s time. My guess is that the writer probably took a long siesta from April to September, spending time on his many leisure pursuits in more comfortable climates, or on the seas between the Keys and Cuba. 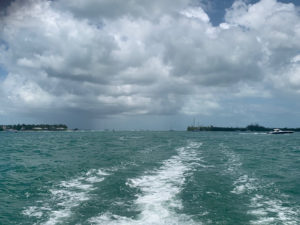