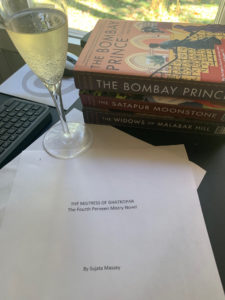 It’s often said that the start and end of a book are easy, but the middle is terrible. I’ve been lost in the creation of a novel for about fifteen months—and quite intensively during September and October. I wouldn’t say any part of this book has been easy. However, on a recent Monday, I polished off Perveen Mistry #4 with a final line. It reads like this: Laughing, Perveen put an arm around Sunanda; and as the skies broke open, they ran in.

Such a vague line! It’s not creatively gorgeous, descriptive, nor climactic. But that’s the way last lines play for me. I see them as the culmination of many strings tied together. These lines often show characters feeling the same expressions of release that I do, at a book’s end.

I’ve written sixteen novels to date, and the last lines typically have an upbeat feeling. I don’t obsess over them; however, the speed at which I write a last line does not mean it’s a throwaway. It’s very important for the readers’ experience.

Here are the last lines in The Widows of Malabar Hill.
“The power of women,” Perveen answered as their glasses clinked.

The Satapur Moonstone.
And she would add one more name, Perveen Mistry Esquire—to the invitation list.

The Bombay Prince.
She was ready to hear all of it.

In my twenty-five years of publishing fiction, I haven’t written last lines that could be labeled as grand revelations or shocks. I’ve read some shocking and heartbreaking last lines in books I’ve enjoyed. We need books like this, and I can’t say I won’t ever have a dark twist on the final page. The truth of a story is gradually unearthed. I write scenes that I later erase; I have characters say things that change in future drafts.

By the last line, I am saying to myself, “Here! This is what I want to suggest to readers to think about. Let’s break down some of those lines.

“The power of women,” Perveen answered as their glasses clinked.
We share the toast with Perveen and her companion after they clink glasses in sentence one. It’s an expression of emotion and gives you an idea of themes of books that will follow this opener of the series. This line was quoted in a number of book reviews, so I know it worked.

And she would add one more name, Perveen Mistry, Esquire—to the invitation list.
You know there will be a party! What could be better, especially since the book ends with a parting of people who like each other?

She was ready to hear all of it.
The third book’s last line seats you alongside Perveen, waiting for a lecture to begin. Her mind is cleared from all the trouble of the previous pages and she’s ready to focus on something outside of herself. 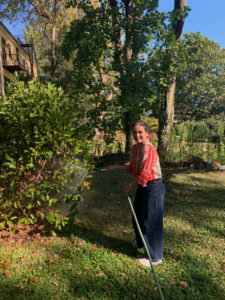 And that’s what’s also great about finishing books. It’s time to go on mental holiday from 1920s India; time to clean up, to cook, to garden, and best of all, to read other people’s work!

1 thought on “The Last Line”