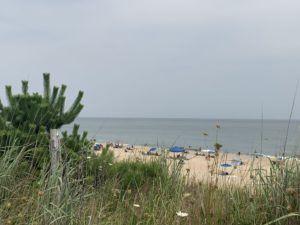 What is it about wind at the shore? It’s the most soothing caress. When you add in the eternal sound of crashing waves, and an endless blue expanse of sea and sky… to me, that’s a perfect moment. 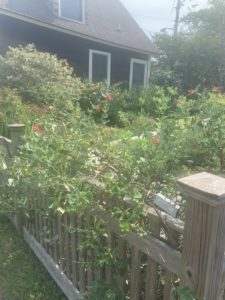 I drove a few hours with my family to Lewes, Delaware for a whole week in mid-July. We are not “downy ayshun” people, as many Marylanders are. When our children were young, we never had the funds to travel to Maine or the Eastern Shore or the myriad other places Baltimoreans visit to escape humid temperatures over 90 degrees in July and August. We were OK with it. But I always had a dream… what would it be like to spend some days in a beach town?

I came to appreciate Lewes (pronounced Lewis) when I was invited to participate in the History Book Festival held annually by the Lewes Public Library. There was the odd coincidence of my having named a British male character as Simon Lewes in my 2013 historical novel, The Sleeping Dictionary. At that point, I only knew that Lewes is a town in Sussex, the area of Britain where I was born. It struck me as particularly pleasant-looking name, and that’s all I can say for my subconscious.

As I said, a couple of visits to Lewes, thanks to the library, made me start to feel a kinship for this charming town. Since its beginnings with a failed Dutch settlement in 1631, Lewes grew into a busy 19th century fishing town. Because of the odor coming from fish canneries, it escaped tourism until the latter half of the twentieth century. This was when the canneries closed, and people from neighboring states realized the Lewes cottages were as adorable as those in Annapolis and Georgetown—and a lot less expensive, both for summering and for year-round retirement.

Through VRBO, we found a 19th century cottage painted a happy yellow on a quiet street a couple of miles from the beach. There was a mix of longtime residents and newer people on the street, and there was zero party scene. We couldn’t have better weather—hot, but not unbearable. A couple of evening storms along the cape kept the humidity low and temperatures in the 80s. 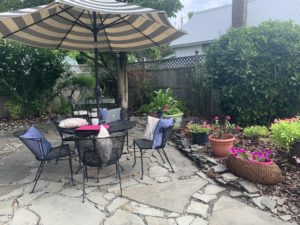 My favorite ritual was coffee in the garden, followed by an hour’s walk along the Lewes-Georgetown biking and walking trail, which was built on the path of a former railway line. Later in the daytime, I’d go with family and friends for short trips to both Lewes’s small public swimming beach, and the wilder, less crowded beach within Cape Henlopen Park. I had overpacked the fridge with food brought from home and made one visit to the Wednesday morning farmer’s market for tomatoes, peaches, and eggs. Never had to set foot in a grocery store. A few friends came to stay for one night, and after they’d gone, one of my sisters arrived from Minnesota to occupy the spare bedroom across the hall. 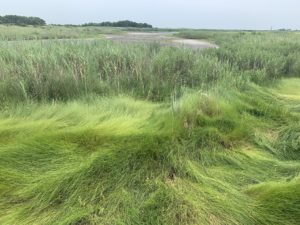 Perhaps the most magical spot in Lewes is the wildest: its cape. Cape Henlopen State Park encompasses the meeting point of the Delaware Bay and the Atlantic Ocean. Formerly military land, this 5,193 acre expanse was turned over to the Delaware park system, who have done a splendid job preserving habitat. An elevated trail that allows visitors to walk or ride over uninterrupted, wild habitat. Gazing down from the elevated trail near Gordon’s Pond, I was impressed by a group of large spiders with eye catching gilded backs. I learned they were belong to the species known as Argiope Aurantia, a much lovelier name than what most people call them: Black and Yellow Garden Spiders. 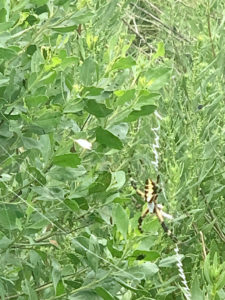 At Cape Henlopen, I saw faraway dolphins jumping out of the waves. Elsewhere in Lewes, black vultures swooped down from the sky to keep watch on garden activities . Cawing seagulls reminded us of the ocean, wherever we went. We looked up at the sky, with hats on our heads, but no masks. 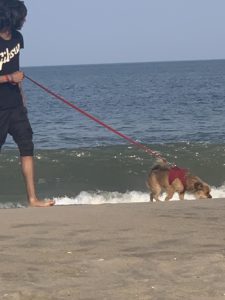 Many times that week, I thought of my late daughter. I imagined her body surfing in the ocean, lazing in the hammock, and yelling at me to come look at the dolphins. She was beside me when I lifted from the oven her favorite summer dessert, peach cobbler. I envisioned her and her brother strolling down the boardwalk at nearby Rehoboth Beach, searching for French fries, and throwing the leftovers for the gulls. But I was also in the moment during the majority of the week at Lewes. I loved roaming the town and trails with my sister and having coffee with my husband at six in the morning in the garden. I was delighted by my son’s surprise reunion with his friend who sprang from the sand to give him a hug. Strolling by myself, I spent hours pondering the intricate color combinations on the cottages, and when I was tired, I lounged on the picture-perfect porch of our rental reading escapist novels.

I didn’t look at the news all week. Upon returning to Baltimore, it all came crowing in. I learned the Delta variant of the Covid virus was surging everywhere in the United States—even Maryland, where I live, and we have a 70 percent full vaccination rate. Even a few vaccinated friends had caught the variant. It seemed like the summer idyll was a brief respite that would be replaced with a return to social distancing.

This means, for me, it’s time for a sea change. I decided against attending the Bouchercon mystery convention in New Orleans this August. I started masking again when I visit stores and the gym.

I’m glad I went to Lewes when I did. And I can console myself that I can still have some of the rituals that became precious there, starting with coffee on the porch at six o’clock most mornings now through Labor Day. 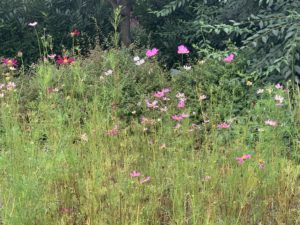