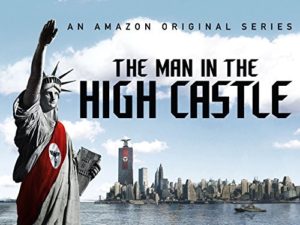 One of my holiday traditions is to indulge in a television binge watch—ideally, a series that gives me that delightful, reckless feeling of wasting time. To enhance the celebration, I watch on my laptop in bed. With tea.

In 2014, the holiday binge was Miss Fisher’s Murder Mysteries, a light-weight crime series set in 1920s Australia. In 2015, I escaped with Underwear, a series about life at a lingerie design house in contemporary Tokyo.

This year, I found a speculative/suspense series on Amazon Video set in 1962 America: The Man in The High Castle. And my indulgence in comfort TV has turned discomforting.

The Man in The High Castle was inspired by a Hugo-Award winning novel of the same name published in 1963 by the late Philip Dick. This talented author’s science fiction has formed the inspiration for other films including Blade Runner, Total Recall, and The Minority Report. Dick was a tortured genius, with mental health issues and a deep interest in philosophy. He believed that different worlds can exist because of people’s mind-states. The possibility of multiple realities flows through his works, including this series.

The Man in The High Castle hurtles us into a world where the Axis prevailed in World War II. In 1962, the former United States are dived into Pacific States (the west), the Greater Nazi Reich (the East Coast, South and Midwest). The Rocky Mountain states lie in the Neutral Zone, but it is far from a safe haven. In Japanese-occupied San Francisco, a degenerate artist named Frank and an aikido teacher named Juliana (they were married in Dick’s novel) live together in a dank San Francisco basement. They are thrown into danger when Juliana’s half-sister Trudy flings a film reel at her just before she is executed by the Japanese police.

Juliana’s efforts to deliver the film to the person Trudy intended brings her into contact with the resistance, and throws Frank and his relatives, who have a fraction of Jewish blood, into danger. The situation is complicated when Juliana is aided by an attractive young man, Joe Blake, working for the Nazis. Not going to say any more on the plot, because I don’t want to spoil it for anyone.

While the TV series is action-packed and suspenseful, the creepiest moments show the subtle ways  the foreign powers reshaped the lives of the Americans following the atomic bombing of Washington DC. In the Pacific States, many bus and street signs are in Japanese, and people routinely eat with chopsticks and fall into deep bows when faced by their rulers. In New York suburbs, families look “Father Knows Best” perfect, but the kids wear Hitler Youth uniforms to school, the textbooks are all about allegiance to the Führer, muesli is on the breakfast table and people use fork and knife in the German fashion. Costumes and sets and the cinematography are top-notch.

Before viewing the first episode, I wondered if Germans and Japanese would feel disheartened by seeing their worst moments in history glorified.  I was relieved to discover humane characters among all the communities portrayed.  A pair of German and Japanese government men, Rudolf Wegener and Nobosuke Tagomi, scheme together to keep power balanced between the two sides to avoid a war. And the Americans subject to rule—the “pawns” who work for the occupying forces, and those in the resistance—have to weigh whether their fight for freedom will bring death to innocents around them.

This series was shot in 2014 and premiered in 2015 with season 1 (you must watch Season 1 in order to understand Season 2). The US presidential race hadn’t yet begun, which meant that white supremacists were lurkers, rather than a much-publicized, blatant force. The Man in The High Castle feels like the canary in the coal mine: the harbinger of disaster.

In the first month after the  presidential election, we have witnessed almost more than 1000 hate incidents. The president-elect said nothing against these acts until he was coaxed to make a statement by a journalist, at which time he looked into a TV camera and said, “Stop it.”

But they won’t stop.  The KKK marched through North Carolina to celebrate Donald Trump’s victory. Trump appointed Steve Bannon, his election strategist and a founder of the racist Breitbart News website, as White House chief of staff. Richard Spencer, a young man who heads a white nationalist group called The National Policy Institute, held a conference of followers in Washington DC where Sieg Heil saluting was widespread in the audience.

Spencer is married to a pro-Putin Russian propagandist Nina Kouprianova. Trump does business with Russia and praises Putin. Trump’s nominee for Secretary of State, Rex Tillerson, is an ExxonMobil CEO who has been awarded a medal from Putin’s administration. New York looks to be the center of Trump’s government, just as it is for the Nazis in the series.

Sounds like a paranoid conspiracy—but people are dead serious about it, and many Republicans now view Putin’s actions favorably. Having grown up in the Cold War, this seems to me like a revised version of The Manchurian Candidate—or at the very least a “Saturday Night Live” skit.

What could happen next—after the ten episodes of Season 2 of The Man in The High Castle are finished? There may be a Season 3, although it’s not official yet.

In the meantime, another program is in the works. The A&E Network plans a documentary series called “Generation KKK” that will follow young Americans choosing racism. This kind of programming—which is bound to attract fans who will connect to the real-life characters—seems like it could be another goose-step in normalizing racist behaviors. But I’ll wait to see.