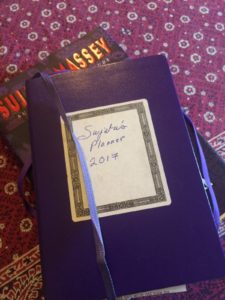 Every December and January, calendars are on my agenda.

I’m drawn to paper calendars of every type, whether they are freebies from the Baltimore City Department of Public Works or Japanese ones from art museums. However, book-sized planners that fit into my handbag are the Holy Grail. 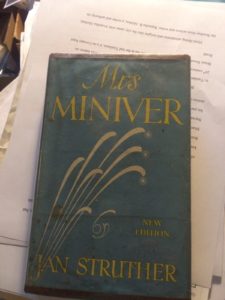 The emotional power of the agenda book is beautifully described in Mrs. Miniver by Jan Struther. Mrs. Miniver, a suburban mother living in 1930s England, has traveled into London for shopping. She buys a practical brown calfskin diary costing three shillings nine-pence, although she prefers the look of a green lizard-skin diary marked at seven-and-sixpence.

After leaving the stationer  (most likely Smythson’s) Mrs. Miniver regrets her frugality and jumps off the bus to make a return.

“She walked back to Sloane Square as fast as she could. At this very moment, perhaps, the green lizard-skin diary was being bought by somebody else—some wholly unsuitable person who merely wanted to get one in a hurry: a rich, earnest woman who would fill it with committee meetings, or a business man who would not even glance at the binding when he opened it to jot down the words ‘Dine George.’ While she herself, with all her dearest activities soberly confined in brown calf, would be thinking about it in an agony of regret.”

Ouch, those Smythson agendas are expensive today! Even more than the famed Filofaxes that people loved in 90s before the Palm Pilot and the Blackberry were released. You would have thought with those sexy new toys, then that the handwritten agenda book would die off. 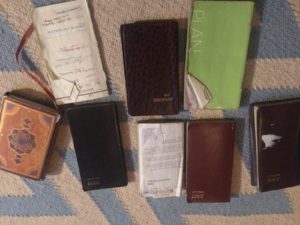 Pictured above is a handful of the drugstore and giftshop agenda books I’ve used over the last few years. You might wonder why I don’t throw them away. The answer is that they are chock-full of phone numbers of old friends I might one day wish to call. One never knows when one will be in Yokohama or New Delhi or Minneapolis!

My husband has mentioned we share a free, easy to use calendar that we can synch to better handle our lives. Naturally, he’s speaking of the iPhone’s calendar app. In the interest of marital harmony, I  began scheduling events on the phone. While the iPhone Calendar makes a lot of sense for a person on the go, I’ve noticed some appointments inexplicably disappear—and also, how really stupid events from Facebook get pushed into my calendar.

These tech problems can be sorted out, but it’s a pain. While in Mumbai, I listed a few appointments happening later on in Baltimore. Because of its too-clever reliance on Greenwich Mean Time, the iPhone registered the events—including carpool pickups!—during the middle of the night.

Given the measly space an iPhone calendar allows, one cannot include a shopping list, a book title, a friend’s phone number, and a to-do list. It’s all too easy to hit the wrong numbers when you’re touch-screening and record a useless E-ticket number.

This is why paper and pen still rule.

I’m not alone in my feelings. This past December, I began hearing the phrase “Bullet Journal” while listening to podcasts. People were suggesting these so-called bullet journals were a way for people to handcraft their own social diaries and take control of their lives in an easier way than with technology.

Ryder Carroll, a young graphic designer in New York, adopted a plan of converting a simple notebook into a handwritten daily calendar for himself which would feature elements like a future log of upcoming activities, a week at a glance, and to-do lists for each day. A round bullet next to each line is either Xed when the project is completed, or given an arrow to push it onto a future day’s list. It is truly as simple as it sounds. You can use any notebook in the world, any kind of pen, although Ryder sells products through his website (and bullet journal is a trademarked word).

Here is an example of how Ryder Carroll “rapid logs” his day:

Other creatives and organizers have combined the adult hobby of coloring and doodling to push their bullet journals to new highs. Boho Berry and Tiny Ray of Sunshine are two very popular bloggers who have inspired followers to designate pages in their journal related to gratitude, affirmations, quarterly goals, and so on. They help people with handwriting practice, so the bullet journals are beautiful to read, rather than inscrutable (a concern for me).

Journalers (I cannot call them journalists with a straight face) also share tips on what to use. The best are notebooks with archival, acid-free pages that don’t show bleed-through from pens, and the very best fine-tipped markers to use. Still, the most popular notebooks are many times cheaper than a formatted Filofax or Smythson. For example, a rule-lined Moleskine notebook in the 8×5-inch size runs $US 18-20, and a dotted-paged Leuchtturm rings in at $US 20-33. All of the top books are hardcover and have an elastic string to keep them from falling open and becoming as destroyed as the agendas I’ve treasured.

This fun article from The Guardian is a smack-down comparison between the UK’s beloved Moleskine and Germany’s Leuchtturm (the name means “Beacon” or “Lighthouse”).

I couldn’t decide which was going to suit me better, so I bought both! 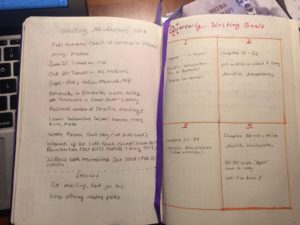 I’ll wager a lot of writers are already keeping notebooks related to their work. But this is the first time I’ve merged my writing plans with daily life. And it’s GREAT.

The bullet journal is perfect for feeding the muse. You can set up pages titled “brain dump” and collect all sorts of random ideas for your book in progress. You might make another collection page all about the steps needed to publish and promote a book. You can create a habit tracker page that charts how many hours you worked, how many words you wrote, whether you checked in on social media, did your research reading, and remembered to take a walk.

For someone who processes information better on paper than any other way—as a lot of us writers do—such journals are a godsend. And  for the rest of the world, research is showing that if you write something down on paper, it may be retained longer in your brain.

I am thrilled with my brilliant purple Leuchtturm diary. Its dotted paper pages make drawing boxes easier. I like the three-page index in the front and the numbers at the bottom of every page.  I’m regularly listing my appointments—and putting some things on the iPhone, still, if they involve the rest of the family.

There’s so much in the Leuchtturm, though, that would only be of interest to me. I’ve created a monthly tracker where I mark off the good habits I’m trying to maintain. I have a page of quarterly writing goals, and another section where I am sticking in Post-It notes with blog ideas (I use Post-It notes so I can move the ideas around for different weeks as the fancy strikes). I’m not a graphic designer or artist, but I’m now the owner of a set of the popular British felt tip pens (Staedler), some gorgeous metallic Uniball gel pens, and ten rolls of colorful washi tape that can border pages and cover mistakes.

Some of the more reflective parts of the journal are a summary of writing-related milestones of 2016 and how I can use this information to be a better writer in 2017. I also have a growing list of writing commandments to view every morning before I start on my book. 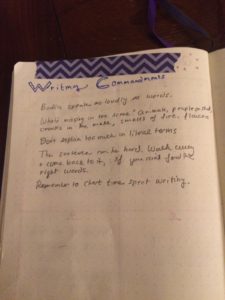 Here are the writing commandments so far:

Bodies speak as loudly as words.

What’s missing in the scene? Animals, people on the street, cracks in the walls, smells of fire, flowers, etc.

The sentence can be hard. Walk away and come back to it, if you can’t think of the right words immediately.