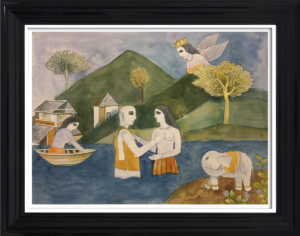 A couple of years ago, I spent a thrilling day shopping for art in galleries the Kala Ghoda district of Mumbai. The upshot is I came home with a gorgeous modern abstract painting found in a an old British Raj building on Rampart Row in Mumbai, very close to the Bombay Dock that I’ve written about in my Perveen Mistry series. Gallery 7 is owned by a sophisticated yet friendly mother-son team, Chandra and Nicholai Sachdev.

They showed me their full canon of famous paintings and offered me tea and a savory Pad Bhaji sandwich during the hours we spent together. Newton, their manager, oversaw the wrapping of the Amrish Malvankar abstract oil painting and added my email to the Gallery 7 Art Catalog list.

The occasional emailed catalog is haunting reminder for me that I am no longer walking through the sunshine of Mumbai with art on my mind.

How can possibly I gaze at art when I have bills to pay for serious things such as my children’s summer classes in Baltimore and plumbing repairs? 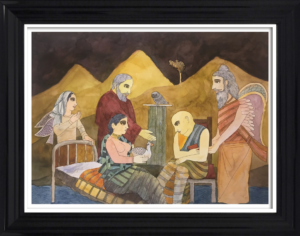 But I’ll admit it—I open up these emails and look at every picture and sculpture. It can be utterly distracting to spend an hour looking at dozens of paintings by artists who are tops in India but not well known in my part of the world. I can pretend I have a budget to buy art. I can divide all those lakhs by 60 to try to figure out what the cost is in dollars, always hoping that it will be more reasonable than it turns out to be.

Art is the kind of thing that you don’t really need…but when you see something interesting, it might become an obsession. 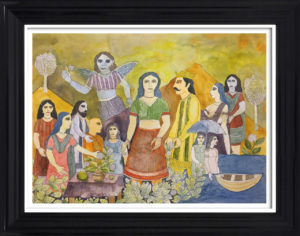 My attention is now focused on Badri Narayan, a painter born in Secunderabad in 1929, when it was part of a princely kingdom under control of the Nizam of Hyderabad. Badri, who died in 2013 of frail health, taught himself to paint, and worked in watercolors, ink and pastels. When I think of Secunderabad—where I spent one marvelous winter as a little girl—I see the city in the same soft earth tones as Badri’s work. 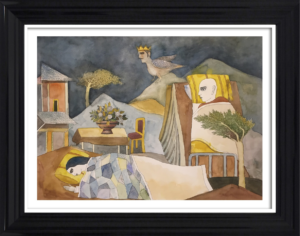 The Theme of Public Health III, 2008, Badri Narayan, at Gallery 7

As an adult, he moved to Bombay, and some critics have said that his paintings, which celebrate mythology from ancient India, are a counter to the hustle-bustle overcrowded world that developed after independence. Badri Narayan was a renaissance man; he worked as an author-illustrator, storyteller and painter, just like Rabindranath Tagore did a century earlier.

Some of the activities and stylized tableaus in the Narayan watercolors remind me of the miniature paintings that were popular in both Muslim and Hindu courts. There are winged visitors in many of his paintings who may be angels; monks, doctors, and husbands and wives. I was particularly moved by the many images of a sick man being comforted by various people in his life, with the winged angel standing nearby. The Public Health series was painted about seven years before his death at the age of 84. Badri Narayan was clearly at the top of his game and taking a look at what he had in his life and what lay ahead of him.

Gallery 7 has the works featured above in its “New Year Sale” that runs until June 1. No, it’s not a 6 month sale! The Hindu lunar calendar starts on different days each year, and this time it began March 18.