People routinely denigrate the press for spreading falsehoods and looking for scandal. In recent years, many have traded in newspaper subscriptions for free online blogs where bloggers write pieces that are rarely fact-checked or vetted. Internet media is often all about enjoyment.

Therefore, I’ve been surprised to see traditional journalists resurfacing as heroes in popular culture. Spotlight, a 2015 movie about the Boston Globe’s reporting on Catholic priest sex abuse, won an Oscar for best picture. I’m impressed it was even possible to get a film made about a serious subject and the writers of a newspaper series from so long ago. Spotlight reveals how one newspaper’s reporters and editors built a big story over time gathering information from many sources and carefully verifying all details before breaking the news. 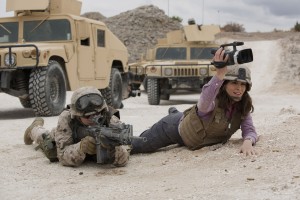 Last week, a journalism escape film arrived in U.S. theaters. I’ve labeled Whisky Tango Foxtrot an escape film for a couple of reasons. First, the ambitious but unseasoned correspondent played by Tina Fey is bored with her long career as a TV news producer in an American city, and trades it in to report from dangerous, exotic Afghanistan. The other reason is WTF absolutely revels in portraying foreign correspondents as hard-drinking, partying, fraternity members. The producers  made the choice to employ a number of non-South Asian actors to play Afghans; again, an easy escape. 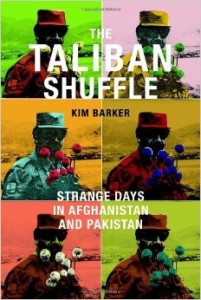 WTF is a celluloid version of a memoir, Taliban Shuffle, by the New York Times’ reporter Kim Barker, who was recast as a TV reporter called Kim Baker in the film. Tina Fey’s Kim character is one of only two women reporters living in a guest house; both of whom wind up having affairs with guys in the house. It’s a cheery, fraternity party sort of place, where the women are treated like the guys, for the most part. This “Ka-Bubble” of their Kabul seems ridiculously removed—but very intense and addicting.

Kim’s story takes pains to show the stupid things a reporter can do to endanger the lives of her “fixer” (a local man who’s a combination of editor and translator), as well as her driver, photographer and security guard. However, by taking the risks, she gets a great story. I appreciated the nuanced look at this issue. The foreign reporter always gets a byline or camera-time and fame; the local person who does the reporting work earns a small salary for a life-threatening job.

Whether they are unofficial “fixers” or byline journalists, too many reporters have died in recent years. 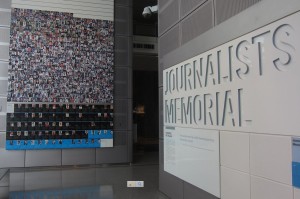 One of my favorite museums in Washington DC is the Newseum. This modern museum is all about the best in media, past and present. The museum has daily displays of front pages of newspapers from around the globe, and dense exhibits focusing on huge American news stories of the past and present.

A particularly haunting stop is the Journalists Memorial. This is a massive wall with columns of dead writers’ names. Nearby is a colorful mosaic that, when you get closer, turns out to be hundreds of photos of these writers. The Newseum’s Journalists Memorial includes a searchable online database  that includes all the names. You can click on a face and name to learn more. 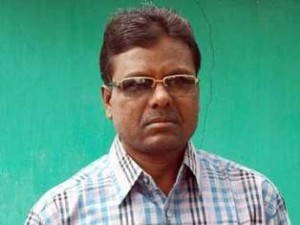 This reporter, Sai Reddy, was a little-known rural journalist in central India with a tragic death. As a writer for the newspaper Deshbandu, Mr. Reddy spent 20 years  documenting the hardships of families struggling to live in a community where Maoists and police battled each other. Mr. Reddy,  who came from the very community he wrote about, had his home fire-bombed by the police, but was ultimately hacked to death with knives and machetes by Maoists in a city market.

In the late 1980s, I was a reporter for the features section at a daily city newspaper. I wrote mostly about people, the arts, fashion and food. You can deduce form this that I never had the kind of stories that ran on the front page. The gravest danger I encountered was when visiting  decaying, crime-ridden neighborhoods.

I still recall driving to an almost completely deserted West Baltimore neighborhood to interview the city’s first South Asian grocer. I was writing a story about the city’s ethnic markets and was determined to move past the well-known standards. The Indian shop turned out to be in a neighborhood full of vacant houses. It was in a sliver of a dilapidated building, with a buzzer entry system and metal grills for protection from thieves and bulletproof glass around the cash register to protect the Indian grocer. Walking to and from the store, I had to pass a trio of teenagers who were staring appraisingly at me. Given the isolation, the poverty, and the intense scrutiny, I had that sixth sense that I might be robbed.

The young men didn’t touch me. Thinking back on their reaction—that seemingly brutal staring—I imagine they were probably curious why a stranger had come to their forgotten corner. And I was walking past them, carrying my own stereotypes, which fortunately did not make it into print.

My reporting experiences were nothing compared to the risky work of journalists reporting on conflict around the world. But just like the overseas correspondents, I wouldn’t never have said “I don’t feel comfortable driving to that place,” or  “Can I pass on this assignment?”

I understood the job requirement.