The Internet has long been the bane of parents and teachers observing middle school kids learn to write papers. You can probably imagine how many times I’ve told my offspring to go to the library, because Googling something does not always get you an academically vetted answer. Teachers hate Wikipedia and its spawn.

Those of us who write about faraway places are often zealous travelers to foreign libraries. The British Library and National Library of India are my Holy Grail of Libraries—although the Ames Library of South Asia in Minneapolis and the Library of Congress in Washington D.C. are excellent. The problem is, it’s insanely expensive to travel to libraries in this fashion. And I find that although my city library, the Enoch Pratt Free Library in Baltimore, has lovely old books about Britain and India dating from the early 20th century, I can’t stroll the archives and come upon serendipitous findings.

The one place you can meander—most call it “surfing,” which seems out of context for me—is the Internet. Don’t tell my kids’  teachers, but I’m discovering theres a vast world of specialized history in digital treasure chests. They don’t usually come up on the first page of search results—but they exist and offer more than I ever hoped to find.

Let’s start off with transportation, which has got to be accurate if you’re setting a fast-paced adventure in a real city like Bombay. So let’s embark on our internet history voyage at Bombayrailway.blogspot.com. Journalist Rajendra Alkekar became fascinated with trains while commuting to high school. As he matured, he never lost interest, and Rajendra discovered significant relics lying near tracks. Rajendra studied conservation and museology, wrote newspaper columns about rail history, and created a website that glows with his own great photographs of historic stations. When I wondered about a particular train route from central Bombay to Bandra during the year 1920, I emailed Rajendra and was relieved to learn that it existed. 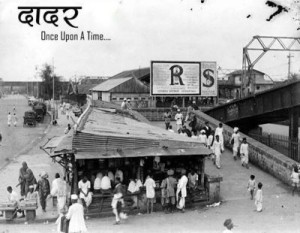 I became fascinated enough with Bombay’s history of rail travel to buy his book Halt Station India  but the website is where I visit weekly to gaze at old train stations.

I’ve also needed to learn a lot about the practice of law in India during the late 19th and early 20th century. That’s a tall order for someone who doesn’t have access to a law library inside India! But one of the foremost scholars of South Asian law created South Indian Legal History Resources—a website by Mira Sharafi, which has been a boon to graduate students, other professors, and the occasional mystery writer. She’s also written the definitive book on colonial law and Parsi culture.

Mitra shepherded me a little farther on my web history journey to an amazing site, Bombaywalla, created by “Miss Bombaywalla,” aka Simin Patel, a young Oxford PhD who hails from Bombay and is devoted to chronicling the history of the Parsi (Zoroastrian community), which is synonymous with Bombay. At Miss Bombaywalla’s site, one can uncover Bombay’s original street and place names, see close-up color photos of historic buildings, and build a reading list of antiquarian novels and travel accounts of Bombay. She fills it out with wonderful color pictures of old Bombay structures that make you want to get over there, right now.

And what of the history of beauty and fashion in India? It’s so much more than the sari. Vintage Indian Clothing sounds like a shopping site, but it’s actually a collection of short but very thorough essays on the charming evolution of fashion and beauty in India. From the site creator known rather mysteriously as Anu M., I’ve learned about the different kinds of bindis (“dots”) that women have used as ornamentation over the years—and the meaning of similar markings on men. I could gaze at glamorous Indian film stars from years gone by for hours.

Does this exist in libraries? Not a chance. In fact, it’s rather ironic that I’ve written this post sitting at a desk in the Quiet Study Room of the Cockeysville Library, which does have books, but provides me just the right setting to pursue online history.