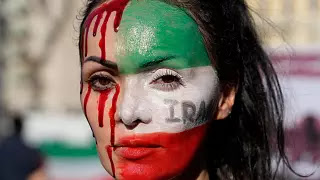 On September 16, a 22-year-old woman named Mahsa Jini Amini traveled with her father and brother from Iran’s Kurdistan region to visit Tehran. Mahsa had covered her hair and wore a long black burqa over her body. However, a strolling group of morality police glimpsed trousers they considered too tight from underneath the burqua’s edge and arrested her under laws that mandate the covering of hair and body for females from puberty onward.

Despite the pleas of Mahsa’s family, she was taken away by the police in a van to a jail, where she was administered morality education. But instead of being released, she fell into a coma, and three days later, she died in hospital.

When Mahsa’s body was released to her family for burial, there was evidence of beating, although the coroner stated she died of a heart attack. As women across the country learned of this death, they flooded the streets, burning the head coverings known as hijab and calling out defiantly against forty years of female oppression. In fact, the reaction to Mahsa’s death is the longest and most widespread protest movement since 1981, when Iran became an Islamic Republic.

In October, forty days after Mahsa’s death, tens of thousands of Iranians marched to her gravesite, despite police warnings and retaliation toward them. And this has not been the end of it: protests continue, despite beatings and shootings by the police. Among the most infamous deaths of female protestors are those of Nika Shakarami and Sarina Esmailzadeh, both 16. Iran Human Rights has tallied the deaths of at least 326 people, including journalists, civilians and children, who have been killed. An estimated 15,000 have been detained by the police, and many are still in jail awaiting sentence, According to reporters for the New York Times, security police are entering schools and demanding video footage of children which they then use to make arrests.

I’m old enough to remember when Iran wasn’t an Islamic republic; the days before religious conservatives and students rose up against the country’s last emperor, Mohammad Reza Shah Pahlavi. As religious conservatives in Iran turned against the Shah for what they saw as Western decadence, he and his family fled to the United States, and they lived out their last years in luxury in various places. Angered that the US had granted the Pahlavis a safe haven, activist students in Tehran invaded the US Embassy and held the staff prisoner for 444 days, which ended in January 1981, when I was a high school junior. I remember that year as the start of the period when many Americans began to openly exhibit antipathy toward Muslims—and those they suspected had origins in Central or South Asia. It was an era when boys would often shout from the car window, “dirty eye-rainian!”

Just as brown children were called terrorists or suicide bombers in the post 2001-era.

In 1979, Iran’s new constitution established that the role of a supreme leader—a spot more powerful than that of the country’s president and that was meant to ensure that the rule of law followed religion. This position has been held since 1989 by an elderly cleric, Ayatollah Ali Khamenei: a former student and close associate of the country’s first supreme leader, Ayatollah Ruhollah Khomeini. What will happen when he passes? The protestors in Iran don’t want another religious government. This makes the existing government fight al the harder.

Many people in Iran are not involved in the protests; just as it was in the United States during the Black Lives Matter activism of 2020. Another challenge for the freedom movement is the lack of central leadership; things have come together very quickly, and communication is curtailed because of the government’s ability to instantly shut down internet and media.

Two days ago, an Iranian court proclaimed a death sentence for a protestor accused of setting fire to a government building. The strong-arm tactic had led to more criticism by  the European Union, Canada, and many other nations, including the United States, which already has had sanctions prohibiting business dealing with Iran for several years. Therefore, imposing more sanctions seems unlikely to do anything. At the same time, the Biden administration is attempting to engage Iran in a new nuclear weapons agreement.

Stalling these talks until women’s freedom is granted is exactly what some Iranian activists think could save their movement. Roya Backlund, an American writer with a Kurdish mother, discusses this tactic and other issues about the protest movement in an article for Stylecaster. I appreciated her list of straightforward actions that anyone outside Iran can take. We have the freedom to speak out; for a girl in 2022 Iran, that act could be fatal.