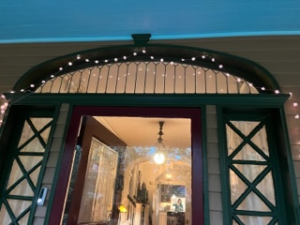 Last week, I had the pleasure of celebrating Diwali, an Indian holiday that threatens to become as well-known in the U.S. as Halloween is now in Asia. Diwali awareness has risen to such a level that Amazon sells Diwali lights, and the New York Times published a Diwali recipe collection. I never dreamed this could happen—and perhaps the Americanization of Diwali was the kick in the pants I needed to have my own observance. 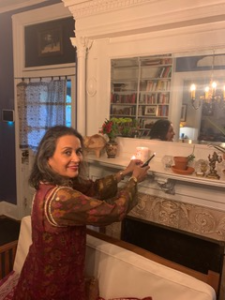 There are theories that the word “Diwali” comes from a combination of words: lamp (dipa or diya in various Indian languages) and avail (line). In India, a line of small clay lamps filled with oil outline houses and buildings against the dark evening sky. The light-up actually happens on the second evening of the five-day holiday. During this time, virtually no business gets done in India. It’s a lot like the time between Christmas Eve and New Year’s Day. 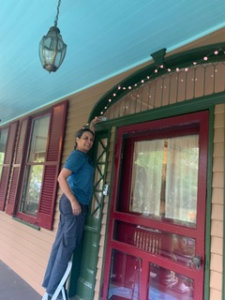 Diwali is most commonly attributed to the epic Mahabharata, when villagers lit clay lamps across the kingdom to celebrate the rescue and homecoming of Queen Sita by her husband, King Rama.

But that’s not everyone’s Diwali, according to The Hindu newspaper. For example, in South India, Diwali marks the day that the Hindu god Krishna defeated the demon-king Nakasura. Diwali is tied to worship of the god Vishnu in some parts of Western India. For Bengalis, the holiday connects with the worship of Hindu goddess Kali, who is a powerful incarnation of Goddess Durga.

Jains use Diwali to rejoice over the nirvana experienced by Lord Mahavira in October, 527 BC.and Sikhs celebrate the Sixth Sikh Guru’s release from imprisonment. Even some Buddhists who’ve converted from Hinduism often celebrate Diwali. The idea that Diwali is not exclusive; Hindus should open their house to all family and friends. Diwali worship often occurs before the party, at a temple or in the home. 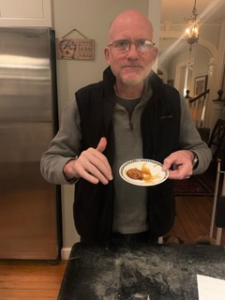 For my first voyage as a Diwali host, Tony and I invited a few local friends with ties to South Asia and some close neighbors. House cleaning and decorating started before Oct. 24, the holiday’s official start. My efforts included sweeping our porch, decorating the railing with tea lights, and hanging lights over the doorway. 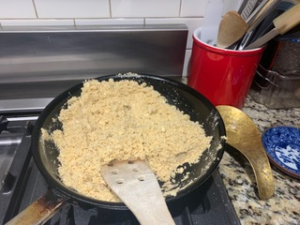 The best part was making sweets—I toasted flour and jaggery sugar before rolling into balls made of chickpea flour, butter, sugar and almonds: a dessert known as Rava ki vada that is featured in Milk and Cardamom, Hetal Vasavada’s Indian and Indian-inspired cookbook. My husband researched recipes and then set himself to three days of making jalebi, a fermented chickpea batter that’s deep-fried into rings that turn glow-in-the-dark orange after a dip in a homemade syrup of cardamom, saffron and rosewater. I also made an old favorite, rasmalai, and friends brought a variety of homemade treats. There was semolina halwa, a flaxseed sweet called alci, and mini-pooris filled with savory potatoes (known as phuchka, golgappa or pani-puri) and chura (also known as chevda), a salty-spicy mix of nuts, raisins, lentils and crispy cereal bits. 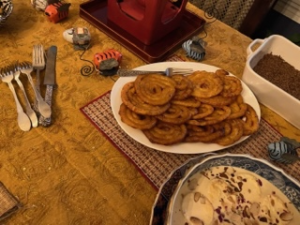 I brewed chai according to YouTube recipe by Chai Pani’s chef-owner, Meherwan Irani, with the only change being the use of decaffeinated Tetley’s which would probably make him scream. But it was a Monday night, and we would need to sleep!

I was touched and delighted by some surprise gifts brought to us, including a Baltimore-grown tulsi plant, which has great spirit and medicine significance in India. Another friend brought an armful of slender red glass and gilt bangles, the delicate, authentic kind I remember getting in India as a child. Sorry, Tony, these won’t fit you. 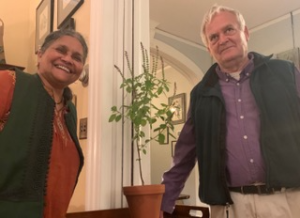 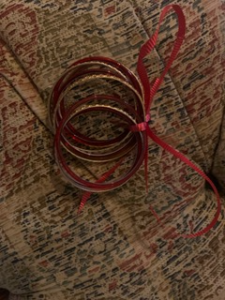 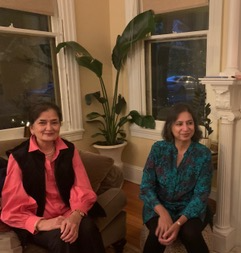 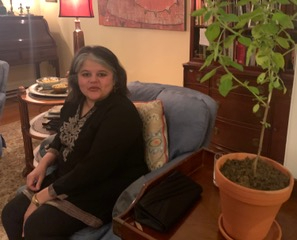 Another traditional activity at Diwali parties is playing card games, especially one called Theenpatti, also known as Flash. People who are eschew gambling might use a foodstuff like dal in place of money in this game, but we decided to be mischievous and passed back and forth the rupee notes I’ve been saving for my next trip. I got all the cash back in the end; not because I won, but because we were just spoofing at gambling. 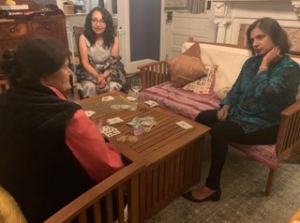 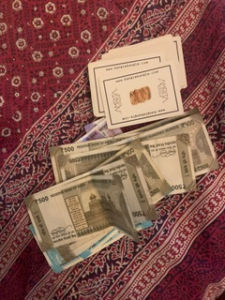 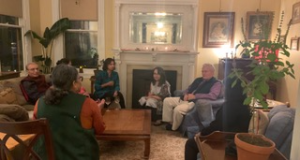 As the sky darkened, the lights blazed warmly, and I remembered something else I’d heard about Diwali; that it marks the start of a new year, a time that we forgive others who might have hurt us, and make amends for wrongs we might have done. It’s a time of renewal, which made it the perfect first party for us  after two years of lockdown. And when I look at the still blooming flowers floating in the brass urli, I see the faces of my friends. 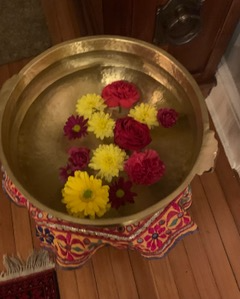