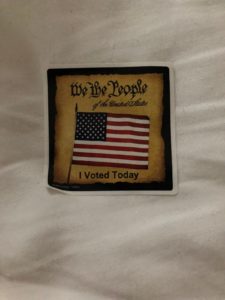 Two years ago, it was my rotation for blog duty the day after the US presidential election. I planned to write something about it that night—because nothing else seemed relevant. I spent the day buzzing around, feeling anxious yet certain the stress would soon end, and I’d be celebrating my first woman president.

I turned out to be wrong. And as the shock at Donald Trump’s surprise victory turned into a dull pain, wore off, people like me began thinking, how can we come back from this? The hope was for midterm elections in 2018. Many people who would not have considered a career in politics before decided to run for office, and there are record numbers of women and immigrant Americans on the ballot.

Typically, the voting turnout for midterms is quite low—but the early voting for the 2018 midterms is significantly fired up, on both sides of the divide.

I live in Maryland, a state where the most apparently important choices for me were whether to re-elect our incumbent Republican Governor Larry Hogan, our Democratic Attorney General Brian Frosh, and our U.S. Senator, Democrat Ben Cardin. I’m telling you, although a lot of people feel strongly about keeping their voting private. That’s why there are curtains around the tables-for-one where we fill out the ballot. I’m glad that where I am, it’s still done with a pen.

This midterm election has hung in my psyche like a suspense novel for two years. And today, I woke up to pounding rain and no sunshine. My mind went first to young voters, and whether they would think it was worth leaving their cozy nests to vote. Even though Uber and Lyft are offering free and reduced fares for people going to polls.

But is weather worth the worry? On November 8, 2016’s election day, it was warm and beautifully sunny. I left Maryland to help with voter turnout in Pennsylvania. The people I met were lovely, the volunteers were stoked. It seemed like the very best kind of day to enhance voter participation—but in Pennsylvania, the state voted red for Trump.

I feel like I have a type of PTSD from being so disappointed in the last election. Perhaps that’s why I’ve given money to senator candidates in various states, but I did not abandon my own work to drive out of state to volunteer in different states, as I’ve done in the last two national elections. I am a shadow of myself.

Today I worked on writing in the morning and went to the grocery store and water aerobics. It was raining, and I didn’t want to be drenched on my way to the neighborhood’s elementary-middle school that is also my polling place. The rain was just a faint sprinkle when I walked over at 1:30 with my husband. The school fence had a few political advertisements on them meant to remind voters of the obvious, but I saw no workers. I did see a friend from the neighborhood who joked he had just voted, and his vote would cancel mine. Is my choice written on my forehead—or was his assumption based on the fact that I’m an Asian woman? A joke between friends took on a curious subtext. That has what has happened, since the last election.

Inside the cafeteria where I once opened yogurt for kindergarteners, I greeted a few more neighbors. There were a few people waiting, and it took about ten minutes to check in—much easier than the hour-and-a-half line of my early voting friends told me she’d experienced. As I carried my ballot to an available curtained voting station, a five-year-old boy playfully ran out from underneath it, bringing back a sweet memory of voting here with a toddler daughter hanging onto my leg.

I thought it was important that my daughter, followed by my son, visit the poll with me. I wanted the children to think of voting as something to look forward to, and today I saw the voting officials give “I Voted” stickers to children, perhaps hoping for the same thing.

The first time I voted I was in my thirties. I had finally gotten naturalized, exchanging British citizenship for US citizenship. While I was naturalized in 1998, 2000 was the first year I voted in a US election. I voted for Al Gore, who lost to George W. Bush. But then—I had eight years of Barack Obama.

At ten o’clock tonight, I turned on the television to see what was happening with the election. I saw evidence of a much anticipated senate contest in Texas go to the incumbent, Republican senator Ted Cruz. I had been fixated on his challenger, Beto O’Rourke.

Yet Jacky Rosen, a strong woman Democrat running for Senate in Nevada, won. And many more women appear to be winning House seats, perhaps as continued fallout from the behavior of senators during the Brett Kavanaugh hearings. I am intensely grateful for this and looking forward to seeing what comes next.

Two different sides seem to present us the chance for a balance of power.

The race is done, and I’m ready for a glass of water.