The Golden State was the port of entry for me as a very young immigrant from Great Britain. Although my family’s stint in California only totaled three years of my childhood, it has always held a mythic place in my heart. Palo Alto is where I remember collecting snails in the garden during a rainy winter and my parents getting their first car. Berkeley is where I spent a mostly ecstatic eighth grade year during in which I bought my first album (The Commodores) and had an awkward first kiss (Laurence).

The beloved house that we rented in the Berkeley Hills was destroyed to a wildfire that raged up from Tilden Park in the 1980s. So I know that fire is both shocking and a fact of life in California.

It has been terrible to follow the news of the devastating fires of Fall 2018 currently raging through residential areas in both Northern and Southern California. These fires—more than 7600—are the most destructive in California’s history. There are reportedly more than 14,000 people fighting fires, including a number of volunteers and prison inmates.

Arguments abound about whose fault these fires are and whether global warming is a factor. I have no argument with global warming and the increasing dryness of California has been well-documented. This article in Slate gives a great explanation of many factors, including the dangerous conditions caused by building very close to wilderness. In some areas, like the town of Paradise, the fire jumped from building to building, and trees were actually left standing.

A few days ago, I flew with my teenaged son to Los Angeles County for college visits planned several months ago. I was almost certain that CalArts, the school we were visiting near Santa Clarita, would have been evacuated. It turned out the flames hadn’t come that close, and the campus was open for visiting.

It felt surreal to drive along the typical crowded highways visiting schools during the three day period. The sky was hazy sometimes, and there was something in the air that gave me slight cough, now and again—but it was manageable. Yet probably twenty or thirty miles away, everything was burned black. The reports from Northern California were even worse; one of my friends has to wear a mask when she goes outside, the air is so filled with particulate matter. And people are living with the knowledge that hundreds are likely dead, and thousands displaced with no chance of rebuilding their homes.

Most California citizens and officials have worked hard not to speed up global warming by regulating energy, cars, and potential sources of pollution. On the trip, we saw electric charging stations for cars everywhere, and my son was surprised to be billed 15 cents for a bag when he was buying sundries at a gas station. The colleges all had well-identified recycling stations and served food in compostable containers. But still—a lot of people want to live in California. And developers and towns have allowed buildings to go up very close to areas with a lot of dry brush.

Rebuilding existing cities takes on new meaning. It was heartening to see reuse of old buildings in many areas we visited. Inside Los Angeles’s Little Tokyo, the crime writer Naomi Hirahara took me to an oasis tucked within city buildings—a Japanese garden that honored the neighborhood’s population and was filled with lush California and non-native plants. I visited writer Jerrilyn Farmer at her beautiful 1920s Spanish home located within a completely urban district in Glendale.

At the University of Southern California, my son and I sat in a former sound stage that had been turned into a performing arts theater. The CalArts tour guide was proud to show us what may be the country’s last modular theater. As I walked around Occidental College, I was taken by many lovely 1920s buildings that spoke of a nostalgic era. And just like in my day—not all the dorms had air conditioning!

The hotel we stayed in was a recycle, too. The Mayfair was once one of the largest hotels West of the Mississippi. This 14-floor hotel was built in 1927 in what was once the heart of Los Angeles, but now is a little bit lonely.  The hotel’s claim to fame is that American crime writer Raymond Chandler lived here in the 1930s. Chandler references in the beautiful renovated hotel were frequent, from Eve’s American Bistro to cocktails named “Windemere” and “Farewell My Lovely.” It made me smile to see 1920s design cliches like potted palms and clamshell motifs and curvy velvet conversation settees in the lobbies. And because today’s creative needs are quite different from that of the 1920s, there are some interesting innovations: a soundproofed podcast studio for guest use just off the bar, and a beautiful writers room on the main floor with many seats around a long, high table. I was the only one writing there at 7 AM on a Sunday morning, but I could imagine a team of television writers breaking story there at a much later hour.

Rain is supposed to be falling on California the day that this blogpost goes to print. I hope that it lasts long enough to give the firefighters an extra hand in quenching the fires and saving the Golden State. 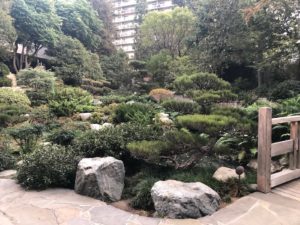