Teenagers May Hold the Key

If you read books set in other countries, you care about things that happen beyond your front door. 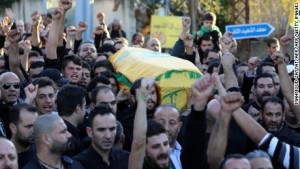 Funeral procession of Ados Termos, who died after tackling a suicide bomber in Beirut (CNN)

The recent blog posts by  Annamaria Alfieri and Cara Black as well as a poem by Karuna Ezara Parikh are powerful testimonies to read after Nov 12-13.

What’s on my mind are the young men and women themselves. What is it that enables a person to step away from social norms and slaughter people unknown to them?

A killer’s psyche is a question that crime writers have to face with every book they write. And in books, you can’t get away with a killing that doesn’t have motivation, such as greed, anger, heartbreak, envy.

But there are killings without cause. Young people affiliated with ISIS, Boko Haram, Al Shabaab and Al Qaeda and other organizations murder not out of animosity for victims, but at someone’s command. In most cases, they’ve left their families and friends for training camps that are advertised to teens as the equivalent as summer camp. If they want to leave, they can’t. 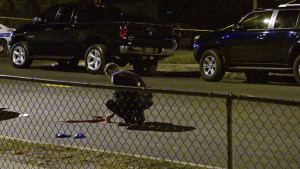 As I write I realize this list sounds awfully similar to the forces leading to young North Americans who’ve been immortalized as mass murderers of the public and gang killers.

In Baltimore, we’ve had 300 people killed from Jan 1 to November 14 of this year. Most of these homicides aren’t solved. The killers remain on our streets, working away. Witnesses to these murders are too frightened to give evidence to the police.

I feel that the unending chain of deaths in my city—and the almost-weekly mass shootings in schools and businesses in the U.S.—is also terrorism.

This brings me back to the similarities between disaffected young people on all of our continents.  For a huge number of children, life is wretched and unstable due to the lack of a secure home. If you are a minor, you usually can’t do anything to change your situation. You must endure put hunger, extreme temperatures,  the school with bullies where nothing is taught, harassment on the street from others, the physical or verbal abuse.

What changes things for children growing up without a loving parent? Another person who notices them and cares.

What I think really counts is kinship. People you spend time with repeatedly who will give you a chance to part of their lives and help you move on to another place. 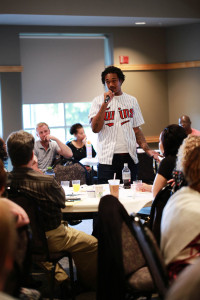 A young voice is heard at Marnita’s Table

In Minneapolis, there’s a family who’s hosted more than 15,000 dinner guests in the last ten years.  Before you write in saying I’ve made a typographical error, let me explain that Marnita Schroedel and her husband Carl Goldstein have an “open-table” policy that brings together people at an event known as Marnita’s Table. The dinner parties are delicious and free and mingle people of every religion, race, gender identity and economic and educational levels. The goal is to really listen to each other and get to the root of serious issues plaguing the city and its people. Teenagers are always honored guests at the table; and at the end of the evening, when a circle is formed and each person speaks, they’re listened to with respect.

There are many positive outcomes to these evenings, starting with the fact that at-risk teenagers who attend the table just once improve their grades dramatically. Most teenagers come many times. They finish high school and go to college. They’ve built a youth advisory council that gives them a chance to meet regularly and take on the task of improving our world.

I dream that all across the world, young people in tough times could have the experience of knocking on a door and be welcomed inside.