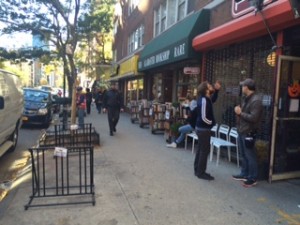 One of the perks of East Coast life is the freedom to visit other cities within just a few hours. Recently I caught a 6:30 charter bus to New York City and was midtown by 9:45. I’d temporarily abandoned my peeps in Baltimore to enact a very pleasant yearly ritual: my New York literary weekend. It was a short walk from my friend’s apartment in Cooper Square to Union Square.

Along Fourth Avenue lies a section once known as Book Row. Only a few bookshops remain out of the 48 that once flourished during the Edwardian era. Still, it was a happy sight to see books and browsers, and the very best bookstore in America is still open nearby. 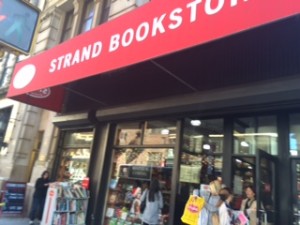 Yes, I hit the Strand. Inside, big wooden tables were loaded with thousands of brand new books, in addition to venerable old ones packed tightly on industrial shelving that took up a supposed “18 miles” of space. I was astonished by the hordes of intense-looking employees—a number I couldn’t begin to count. Hundreds of customers swirled around me, and getting near a particular bookshelf was a give-and-take between people as carefully negotiated as entering the subway.

Soho Press was around the corner. I met with my new editor, Juliet Grames, and the marketing and publications staff. An energizing conversation was chased by a tasty lunch at a nearby Japanese restaurant. I left a few hours later with Soho’s cute “Crime Has No Time Zone” bag loaded up with the latest from David Downing, Mette Ivie Harrison and Andromeda Romano-Lax.

My happy publishing afternoon continued with a cup of tea with my literary agent, Vicky Bijur. As we talked about my career and the general future for fiction, our conversation turned to the good news that three of Vicky’s authors have had books turned into major films in the last year… one of these, The Man Who Knew Infinity by Robert Kanigel, is an Indian historical biography of Ramunajan, the mathematician. The film stars two of my favorite guys: Dev Patel and Jeremy Irons.

As Friday wound down, I sat in a Union Square coffee shop with my cousin, Suman Bhattacharya, who also writes fiction. I was intrigued to hear about Suman’s latest novel-in-progress set in a modern slum in Kolkata. The American agent who received his query asked whether there was a white male character in the storyline. My cousin’s depressing report reminded me of some chats with screenwriters interested in transferring my Japanese mysteries to US locations and characters. I encouraged him not to give up.

Still, this quandary was on my mind as I headed over to the Indo-American Arts Council’s second annual literary festival. I was so eager for the festival that I was one of the first people to arrive at the new location at Hunter College. The challenge of getting decision-makers to accept diverse works of fiction was a recurring topic on many panels, including one on how to break into publishing, and another about writing for film.

I moderated a panel on Sunday with three terrific women literary fiction authors. We discussed whether we thought we wrote different kinds of books because of our gender, and how audiences reacted when several of us chose to write about characters and places that didn’t seem to match up with our Asian names. It was a lively roundtable discussion. One of the panelists, Mira Jacob, recently wrote a Buzzfeed commentary about her odd experience of being talked over while giving a speech on race at a Publishers Weekly event. Mira said the net result of the ignoring drew more far more attention to the issue than a successful speech would have.

How do we create original, creative books that will be embraced by the English-language publishing universe? Believe it or not, this concern also applies to cookbook authors. Many big Indian foodies abhor the way food is typically photographed in brass dishes, and old-time Punjabi recipes are served a continuous loop. They want to convince us to cook differently.

At a panel titled “The Hot New Genre of Food Writing,” a couple of Michelin-rated chefs, an Indian culinary TV host, and a US-based food writer shared tales of beloved family members who set them on their paths and the joy of using with spices with local, organic fruits and vegetables particular to North America. My appetite was whetted, and I wished I’d had a chance to eat at the panelists’ restaurants: Vikas Khanna’s Junoon, and Suvir Saran’s Devi. I also regretted missing the big interview with food writer/actress Madhur Jaffrey on Thursday, and another book talk with writer/actress/Top Chef host Padma Lakshmi.

Ten new books barely fit in the three bags I packed at festival’s end. As I awaited my bus at a bar near Rockefeller Center,  I realized that, for me, books are the seventh food group. Visiting one of the world’s great publishing capitals each year replenishes the pantry within my heart.