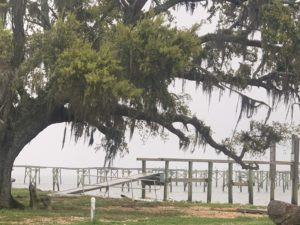 It takes just two tanks of gas to get the 1,100 miles between here and Southern Louisiana—and no tolls to pay, either. I know this because last week, I drove there with my husband to see his mother and brother and the rest of the family. Sharing the driving made it relaxing, as well as our decision to stay in old hotels and inns both ways.

Louisiana is the kind of place where there’s so much to look at, taste, and feel that I inevitably become interested in something unexpected. This time, I saw the rebuilding of houses after Hurricane Ida. I casually use the expression “keeping my head above water” to express that I feel too much is going on. But in Louisiana, that phrase is literally something people worry about every fall. 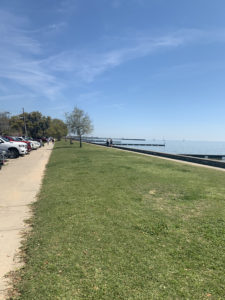 Tony grew up with his older brother, Don, in Metairie, a near suburb of New Orleans. A few years after the destruction of 2005’s disastrous Hurricane Katrina, both my mother-in-law and my brother-in-law worked hard to rebuild their properties. And then they both made decisions to get farther away from the Gulf, settling in the towns of Mandeville and Covington. These neighboring towns lie on the north side of Lake Pontchartrain, a massive body of water that has a 35-mile long causeway that connects it to New Orleans and its near suburbs.

While still classified as South Louisiana, my in-laws’ new home base—part of St. Tammany Parish—is too far to be at risk from a gulf surge. However, there is that lake I just mentioned. 630 square miles.

Don’s spacious house was built on pilings 20 feet high. It lies about two blocks from Lake Pontchartrain. My mother-in-law’s nursing home in nearby Covington was built far from the lake. However, it is vulnerable to the threats of wind damage and power outages.

Tony remembers many hurricanes from his childhood in the 1960s through the early eighties. He recalls the routine of piling into the car and evacuating to a motel in Northern Lousiana whenever the evacuation orders came. After 1969’s devastating Hurricane Camille, my late father-in-law, Sam, took Tony and Don on a road trip  along the coastline of Louisiana and Mississippi so they could see things like massive fishing boats run aground into the middle of shopping districts.

Katrina is the biggest hurricane on record for Louisiana. Reaching Category 5 status in the ocean, it reduced slightly to a Category 3 hurricane when it arrived in New Orleans. The water surge was so forceful that several New Orleans levees failed. Much of New Orleans flooded, with people drowning in their own houses or on the road when they tried to flee. Katrina caused 1577 deaths in the state, with smaller numbers of deaths in Mississippi, Georgia, Alabama and Florida, as well as plenty of property destruction.

When Katrina came, Tony’s family was safely evacuated to North Louisiana. However, their homes in Metairie were damaged. Don’s home had flooded; even though it was less than a foot, that was enough moisture to destroy all the walls. Part of the roof was pulled off at the house in Metairie where the boys grew up and Tony’s mother, Harriot, still lived. Harriot came to live with us in Baltimore for several months, until Don had overseen the completion of repairs to her house; his took a lot longer.

They were among the lucky ones. Other people never were able to salvage their houses and became renters. Thousands of people left New Orleans as disaster refugees, their homes and possessions destroyed, and settled in other parts of the country.

Katrina brought so much pain that Hurricane Ida arriving in 2021 seemed like a cruel cosmic joke. I’d planned to be in New Orleans in September 2021 for the Bouchercon World Mystery Convention. In late August, I reluctantly cancelled my hotel and flight because Delta was spreading exponentially in Louisiana—faster than anywhere else in the country. Enough Bouchercon participants were cancelling for this reason that the convention organizers opted to cancel that year’s convention, postponing the hotel reservation for a future year. Lo and behold, Ida announced she was coming into town that very weekend.

Ida came on Sunday, August 29, with 150-mile an hour winds and heavy rains. Evacuation had been recommended and most people, but not all, had left New Orleans. Fortunately, the redesigned levees held the water from flooding the city. The greatest damage came from the fierce winds. An estimated 92 people died due to the storm in nine states.

Tony’s mother stayed in the nursing home and all was well there, given its good location and back-up power sources. Don, his wife and youngest daughter evacuated north. It was a good thing, because their part of Mandeville was flooded, leaving two feet of mud in the open area under the house where his cars would have been parked, if he hadn’t removed them.

People in Louisiana are used to storms, and they clean up as fast as they can afford—and if FEMA and insurance come through for them. This time around, because of pandemic supply chain problems, construction supplies took months to arrive—and construction workers were in short supply, as they are across the country.

As I walked around the neighborhood filled with lush trees and tropical foliage, I noticed most houses were on pilings, and others were in the process of being raised, with blocks underneath. I gazed into the neighborhood’s ditches, a historic and simple way to assist with the diversion of overflowing lake water. These ditches are cut into the earth alongside the roads near the lake. The ditches held murky water, weeds, and occasionally, visitors from the lake. We were advised to go out walking carrying a long pole in order that an alligator might emerge and behave aggressively. During our walk, it turned out the gators had better places to be. 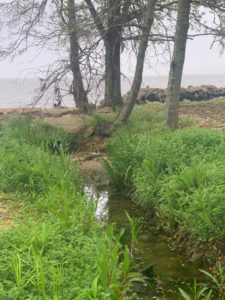 I paused at one house right on the lake that was vastly bigger than the others with an unusual wrap-around style. Someone had recently bought the acreage, which originally had an old, small house on it. The original house had very inexpensive flood insurance. In order to keep the same low insurance rate, the home buyer could not tear down the original residence. Instead, he built his dream home to encapsulate the old one. And yes, it’s on stilts—but because he elevated at 15 feet, rather than 20, the space below isn’t high enough to house all his vehicles.

Mandeville has a charming historic section nestled along another stretch of the vast lake. In “Old Mandeville,” you can eat biscuits and shrimp and grits at Café Lalou and shop for candles and vintage towels at a number of small shops.  The town was developed as a summer resort community for wealthy New Orleanians to visit in the mid 1800s through the early 20th century. Most of the historic cottages in this area were built so long ago nobody thought about elevation from possible lake flooding. Many of the vintage cottages still rest on the ground, while others are getting a boost.

While we were in Louisiana, we visited Randy, my husband’s close friend since primary school days in Metairie. Sitting together in 79-degree warmth of a back yard in Covington, Randy mentioned he was part of the Cajun Navy. This informal volunteer group—which came together around Hurricane Katrina—is a term for the owners of private small boats who drive them into flooded areas to rescue people trapped in their homes.

Randy has driven his boat as far as Texas to assist in rescue missions down flooded highways. When Ida came and power was lost to many neighborhoods around Lake Pontchartrain, repairs were delayed because of giant fallen trees that blocked access to streets. Randy got in his own truck, brought some saws from the garage, and went to a neighborhood and chopped the trees apart so the neighborhood could be entered. He did this because he knew about a friend’s elderly mother living alone in this cut-off neighborhood. He got to her and brought her out to stay with him and his own family until her neighborhood’s electricity was restored.

The ongoing work of Randy and other volunteers in Louisiana reminds me of a legendary water rescue in Europe known as Operation Dynamo. In the aftermath of the Battle of Dunkirk in 1940, 338,000 British and Belgian soldiers were trapped on the beach in France. Nazi forces had control of the town. British people living along the coast sailed out to rescue them at the French beach, assisting the Royal Navy. Saving so many lives was a miracle and surely essential to the Allies ability to continue the war and ultimately defeat the Axis powers.

To drive away from the threat of surging water, leaving everything behind to uncertainty, is a fear I’ve never experienced. Just as I could not picture myself commandeering a boat on flooded highways. But with a lifetime of storms, people can gain extraordinary strength.