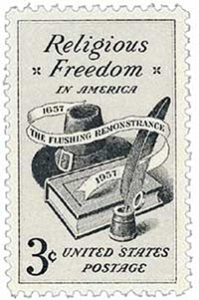 While looking through our motley collection of stamps to find a small one  to add to an envelope, I stumbled across a surprise: a modest, black and white stamp honoring “Religious Freedom in America.”

I’ve seen stamps honoring different religious holidays, but never one for religious freedom. The stamp was issued 1957. The McCarthy years of political prosecutions were waning, but it was still an era that non-Christians were being turned away from universities and neighborhoods. Religious and political minorities did not have full rights.

The stamp’s fine print mentions the Flushing Remonstrance of 1657, wherein citizens of that part of “New Netherlands” (later to become New York) petitioned their Dutch colonial government on religious tolerance.

Stamps are both postage and government propaganda. I find it intriguing that the US Postal Service chose to promote a little-known event that predates the Revolutionary War. Yet it seems a precursor to the U.S. Constitution’s First Amendment:

“Congress shall make no law respecting an establishment of religion, or prohibiting the free exercise thereof.”

It felt shocking to encounter this stamp after flying into Baltimore-Washington International airport this past Sunday. The airport’s many televisions broadcast a CNN feature about Republican presidential nominee Donald Trump announcing a proposed expansion of his desire to ban Muslims from the United States. I noticed a young woman in a long dress wearing a small black voile headscarf standing near the TV. She was busy on her cell phone. I was worried that she would look up and see the latest distressing announcement.

My thoughts rolled to 1933. Germany’s president, Paul von Hindenburg, tried to appease the country’s Nazi party by appointing Adolf Hitler as chancellor. Chancellor Hitler played on people’s fears, spewing racism and anti-Semitism. He targeted a country where too many working class people had lost out economically and were looking for a champion.

I got to thinking about how people in the country reacted to Hitler’s appointment. Apparently, two-thirds of the country’s Jews stayed. I imagined them thinking then, just as we are doing now: shouldn’t we go about one’s daily life honorably and expect the country to come to its senses within the year? After all, Jewish families had resided in Germany for centuries. Many of them had good businesses and professional positions and many Christian customers, neighbors, friends. They felt they were German, and they were invested in remaining.

The Italian Jewish chemist, Primo Levi, survived Auschwitz. After the war, he wrote about the psychology of Jewish citizens wanting to stay in The Drowned and the Saved. “This village or town or region or nation is mine. I was born here, my ancestors are buried here. I speak its language, have adopted its customs and culture, and to this culture I may even have contributed. I paid its taxes, observed its laws. I fought its battles not caring whether they were just or unjust. I risked by life for its borders, some of my friends or relations lie in the war cemeteries. I do not want nor can I leave it…”

During the Hitler years, Jewish people with enough funds, connections and luck managed to get to countries not reached by Hitler’s army. Ironically, the Jews learned England and the United States were loath to welcome them. The Anglophone nations feared that amongst the refugees, Nazi agents would be hidden; and that if they allowed more than a handful of war refugees to enter, they would be unable to hold back the masses.

We have seen these attitudes replaying again as Donald Trump scapegoats Muslims. In Britain, more citizens voted to leave the European Union than to stay.

How can people think so little about the humanity of others, and fall prey to fear-mongers?

And will the rest of us be brave enough to stand up before it’s too late?