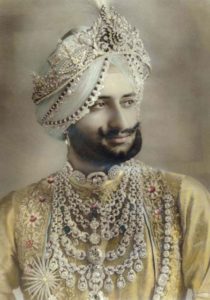 HH Yadavindra Singh, the Maharaja of Patiala, and his family’s legendary diamond

The best-known images of India are probably Bollywood glamour, sidewalk squalor, and British colonial life. We see this in photographs and film. Those lucky enough to visit the Subcontinent will undoubtedly encounter elements of these icons.

Yet most South Asians regard roughly twenty-six hundred years of royal Indian rule as India’s defining history. King Ashoka, Emperor Akbar and the succeeding Mughals, and the many kings of small and large Hindu and Muslim kingdoms, remain points of cultural celebration.

It’s not widely known outside India that the British never held all of India, during their almost three decades of presence on the subcontinent. The British coexisted with kings of areas they called “princely states”; because Queen Victoria was Empress, followed by King George, it would be unseemly to call these men anything other than “princes.” Royal families overseeing kingdoms ranging from a few dozen miles to thousands retained their authority through 1947, when almost all  elected to secede their powers and become part of the new democracy of India. It was a hard decision to give up centuries of rule. Where else but palaces could men wear ten-pound diamond necklaces and get away with it? 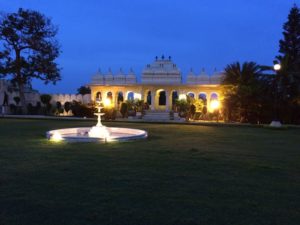 The City Palace in Udaipur during rainy season

During my time in India last summer, I spent several days soaking up the lifestyle of Rajput kings and queens at the City Palace of Udaipur, Rajasthan The current Maharana still lives in one heavily guarded section. I did not meet him. Arriving just as monsoon broke with heavy rains and lightning at Shiv Niwas, the hotel within the Udaipur City Palace, is my most beautiful memory of the visit.

However, I had a very eerie, claustrophobic sensation in one section of the old palace: the zenana. This is the area of the palace restricted to royal women, their servants, and children. The inlaid floral designs on the marble walls were gorgeous, but the rooms felt so small and hot. The zenana had its own garden, but it was smaller than the other garden spaces of the palace compound. 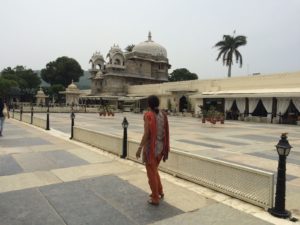 At Jag Mandir, an island palace meant for summer recreation in Udaipur

I’ve learned more about the secret lives of secluded women from the memoirs of Cornelia Sorabji, India’s first woman lawyer, who was often the only person from the “outside” to meet royal women who were suffering underneath the heavy jewels in the late 1800s and first decade of the 20th century. In the zenana, Cornelia learned about scheming relatives plotting to steal her client’s inheritances, throw their children out of the running for rule, and murder. Her memoirs India Calling and India Recalled relate suspenseful stories of royal women and their children and how she did her best to help. 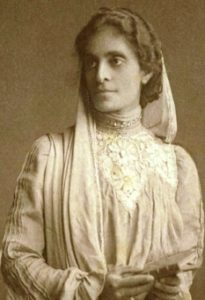 I’m also fascinated by E.M. Forster’s Hill of Devi, a memoir published in 1953 that shares his Indian royal lifestyle during 1912-13 and 1921. Morgan Forster simply adored Asia and Africa; he decided to find a way to support himself in India while he continued work on his novel-in-progress, Passage to India. In Bombay, he was introduced to he Maharaja of Dewas State Senior. The two princely states of Dewas were ruled by the descents of royal brothers, and thus named Senior and Junior; each had its own palace, army, nobility, and dramas. Tukoji Rao III took a shine to Morgan and gave him the title “Private Secretary.” 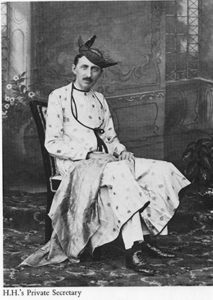 EM Forster dressed for business as a royal personal secretary

This became the ultimate “writer in residence” gig, with Forster holding office hours in the morning and teatime only. He was set up in a guest house with servants, a generous salary, an elegant wardrobe of Indian clothing and other luxuries. As a European working for Indians, it was extremely awkward for British India officials who came to visit the Maharaja. Some officials decided it was easier to ignore his presence rather than admit to the fact that a European was under the employ of an Indian. Morgan, who sided politically and emotionally with Indians, ate it up.

Forster’s palace memories are of thrilling musical evenings, intrigues with other rulers, and most touching, the family rituals. While Cornelia Sorabji’s writing is very compassionate toward the royals, his comments seem meant to coax a knowing laugh. Yet the details are so exact and colorful that only an outsider could have thought to record them for history’s sake. 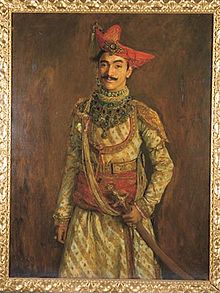 Here’s an example from Hill of Devi: “The birth of a little baby has turned everything upside down, so far as it wasn’t already in that position. The rites—they are more than customs—are extraordinary, and seem designed to cause the greatest possible discomfort to mother and child. The unfortunate pair have to listen to music outside their door for nearly fifteen days. It began with fireworks and a discharge of rifles from the entire army in batches: then drums, trumpets, stringed instruments and singing. For five days, the husband is supposed not to see his wife, but during the whole fifteen he must sleep in the compound where her house stands and his friends and attendants stay with him and listen to the continual music…”

Forster would rue the music, but if a song came on that he liked, even if it was 3 a.m. he’d slap his turban on and rush out for a close up.

To me, that’s the very definition of a wise traveler.