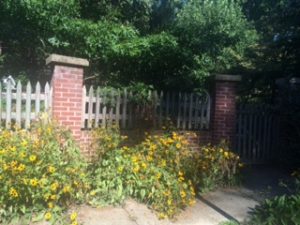 Sometimes it seems our population has two types of people: those who hate to see summer end, and those who can’t wait.

Last week, school started in Maryland, and I began experiencing the most time for my work than I’ve had in the last 18 years. Chalk it up to one of my children starting college, and the other joining a terrific high school carpool group that departs at 7:15 a.m. and doesn’t return until 6 p.m.

In the last ten years, my lament has always been: if only the day had 27 hours, not 24. Despite loving my children very much, the demands of driving back and forth left me with less than six hours per day to write and do everything else.

Now I’be been given 10.5 hours, five days a week. That is a ton of writing time—and some me time, too. 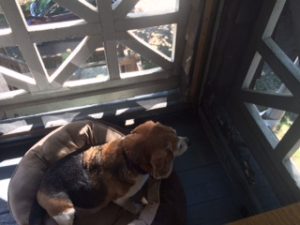 The weather is still balmy enough to write in the “summer office,” as I call the west-facing screened porch on the second floor of our Victorian cottage. This is the very best place I’ve found to create—and only will feel comfortable for a few more weeks, at which time my muse (Charlie the beagle) will become broken hearted.

It feels vacation-like to settle into work at a natural temperature and in dappled shade. The whispering of trees and chattering of squirrels that makes the space seem sacred. That is—until Charlie sees another dog walk the lane fifty feet underneath us and reads him the riot act. 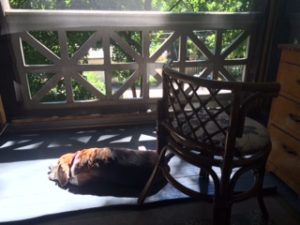 If it’s rainy, I go to my real office on the third floor, where I’ve got a desk tucked under the eaves. It’s easy to forget time and write, write, write.

There are times that I’m working on a manuscript and just can’t find the right word. Then I step away and do a short household chore. It’s important to remember to stretch. When I come back, I usually know the words that had evaded me earlier. 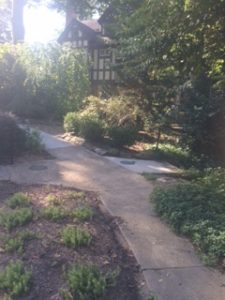 Walking is another delight of a writing routine. It’s easy to get wrapped up in a story and decide not to go to a gym class—but I can’t find an excuse not to walk for thirty minutes or an hour.

The North Baltimore neighborhood where I live is a walker’s paradise. Roland Park was laid out between 1890 and 1920 by the Olmsted Company, a landscape architecture firm that designed parks, college campuses, zoos and residential suburbs. The naturalistic, wild approach to neighborhood design made it a refuge. 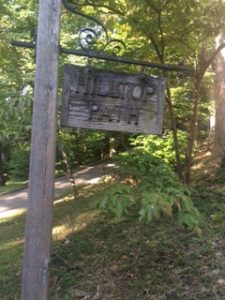 In less than an hour, I can walk up hills and ridges, traverse curving streets, enjoy the shade of towering native trees, and explore the secret staircases in a network of paths and lanes designed for people and horse-drawn cart traffic. I love to meander off on these mysterious paths that take me to a peaceful place. 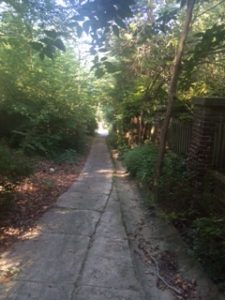 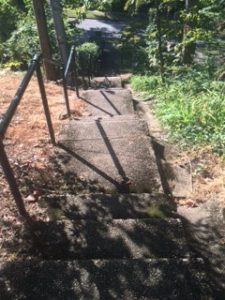 Lately, I’ve been counting monarch butterflies on my walks. In the 1970s, suburban gardens were filled with dozens. As a child, I thought they were as common as flies. 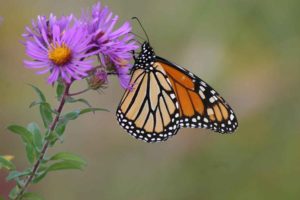 These days, I rarely spot more than a single monarch on my walks. I know that it’s a matter of not enough milkweed homes around for their caterpillars.

But I’m cheered by the solo flyer doing its daily job, just as I enjoy coming back to the house, taking off my shoes, and getting back to my own work in a silent old house.