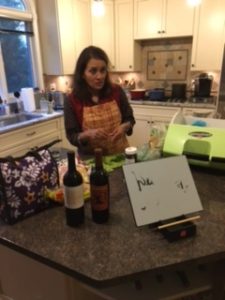 Cooking up an auction dinner for Malice Domestic. The island is neat at this point!

I’m a regular participant at the friendly Malice Domestic convention held annually in Bethesda to celebrate traditional mysteries. Last year, at the convention auction, I decided to give more than a signed book. Having found that readers of diverse books are usually enthusiastic foodies, I offered to cook up a gourmet, multi-course Indian dinner for ten. It would be work, but going to a good cause: KEEN, Kids Enjoying Exercise Everywhere, a program offering movement opportunities for children with disabilities in the DC-MD-VA area.

Longtime convention friends Alan and Cheryl Leathers paid in the “high three figures” for the meal, even though they lived outside my delivery zone. The couple lives in Colorado. I’d said I could serve a dinner in a home in the Baltimore-Washington DC-Northern Virginia area. I was shocked they’d bought a gift they could not eat. 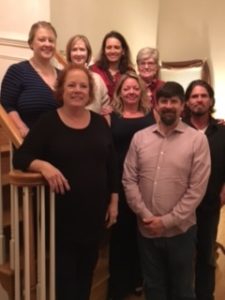 Malice Domestic Board, a couple of spouses, and me

But the Leathers had a secret plan. They gifted the dinner to the Malice Board, a group of volunteers who do everything for the convention from literary programming to participant registration and meal planning.

Joni and Don Langevoort kindly hosted the meal in their spacious Vienna, Va. home that included a large dream kitchen with high quality cookware. I could prepare the meal at my home 60 miles away, and drive it in, doing the final touches there. 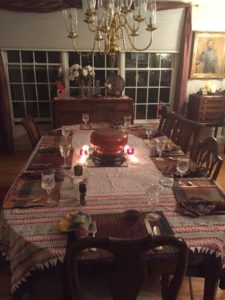 I had five months to plan the dinner, so it should have been a snap, right? I love making Indian food. The problem was, which of my 25 Indian cookbooks to use for the meal. Should I use home recipes? The Internet? Should there be a regional theme, and how much spice did I dare use for ten people with varying tastes, including one who’d never eaten Indian food before?

I went on a book research trip to India four weeks before the dinner, and eating there helped me put together a plan. I’d start with sev puri, a vegetarian chaat dish ( snack) that looks really pretty on a plate. The rest of the menu would be South Indian, which is not widely available at Indian restaurants and therefore could be interesting for my diners.

I decided to choose most dishes from Kerala, the fantastic state at India’s tip that is known for its religious diversity and a cuisine that includes meat, fish, and vegetables for most. My favorite Kerala dishes are seafood ones, so I chose to make a shrimp curry with coconut milk from Maya Kaimal’s 1997 cookbook, Curried Favors. I found one internet recipe for Tomato Pappu, a South Indian-style dal, and used my own non-recipe for the rice.

For a Saturday night dinner, I grocery shopped on Wednesday, Thursday and Saturday morning. While I maintain that Indian cooking is easy, making one’s own coconut cilantro chutney and scratch masalas (spice mixtures) for multiple dishes takes time. I clocked my cooking hours at about fifteen, and I wouldn’t have made it the last day without the reassuring sound of an audiobook playing in the kitchen.

Here’s what I cooked: 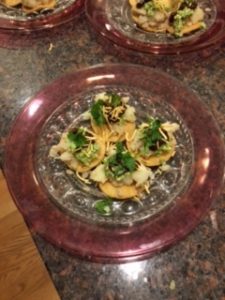 Sev Puri, an appetizer with a crisp puri topped with spicy veggies, chutneys and chickpea crisps 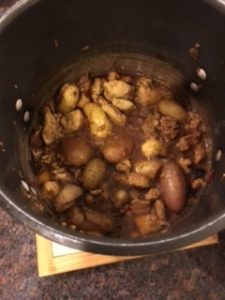 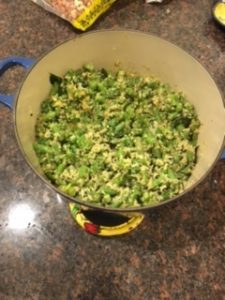 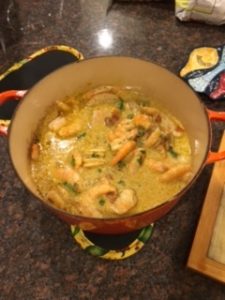 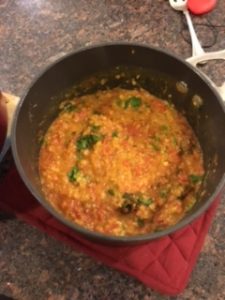 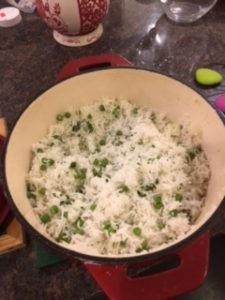 My own simple rice pilau with green peas

We also ate fried paratha breads with the meal and dipped into lime and mango pickles and cucumber raita. Rasmalai was the only dish that broke the South Indian theme. It’s a sweet, milk-based dessert that is eaten all over India. I should have included a picture, but we ate it all up before I thought.

For beverages, I brought sparkling white wines and also a sparkling Shiraz that unfortunately exploded all the way up to the hosts’ ceiling! Nix on sparkling reds from this point forward.

We had a great time at the dinner, with the special excitement of a board member’s adorable 12-week-old daughter, and the Langevoorts’ dog and four cats. All in all, it was a feast to remember.