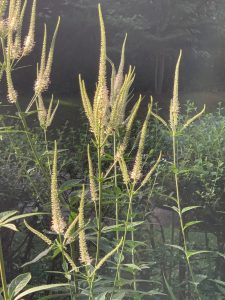 I got a three-month writing retreat with every comfort needed!

I scrawled the grand statement, which sounds like a cheesy advertisement, and taped it next to the guest room desk back in March. I was upset about the pandemic, and I was trying to reframe what I could do with the quiet time in my future. There would be no school activities, doctors’ appointments, no grocery shopping, no hours at the gym. The time would really be mine alone to write.

Of course, I wrote down the hours I planned to write. They came just before or amid zoom appointments and phone calls. In between those appointments I had other duties, ranging from cooking to dog walking and gardening. All of it went into my bullet journal. Some days, I felt like I was writing more in my bullet journal than anywhere else.

It’s crazy how fast the three months of retreat turned to four. And no end in sight.

Here’s my plan, which no longer requires documentation for myself, or anyone else. I work on my writing for as long as I can before my brain goes dead, usually two to three hours. And then I credit myself for what I’ve done and move onto something else. Often, it’s the garden.

I’ve described the growing pains for my fledgling victory vegetable garden, which has yielded the tiniest radishes I’ve ever seen, a bit of parsley, and some shallots that may or may not be ready. I’m afraid to dig them out and be disappointed.

My native plant gardens are different. Started in fits of activity and lulls of laziness over the last four years, I have three distinct zones filled with cuttings and young seedlings that took root, require little water or care, and are bursting with enthusiasm.  If you could imagine a book that would write itself for each year—yes, that is my actual fantasy—you only need to see a native plant garden doing just that.

Pictured at the top of my blogpost is a native plant to the Maryland-Delaware-Virginia area; it’s called veronicastrum virginatum and is more commonly known as Culver’s Root. Already it’s almost five feet tall, with flowery stems set up like a candelabra. I’m thrilled this one huge clump of vv has become Studio 54 for native bees, all shapes and sizes.

I am not afraid of my bees. I love to watch them dance around the Culver’s Root and the other neighboring plants in flower. I smile when I see the squirrels chase each other in the trees, and I even tolerate watching a rabbit munch the leaves of a baby native flower.

Insects and animals are my company, breaking up the isolation. And the distraction they offer is oddly medicinal. When I am literally grounded—with my hands in the earth, I mean—I look two feet away and discover a small robin has settled down to watch me, and doesn’t budge when I move.

Gardening does something magic, even if it means I’m not writing. After I dust off the dirt and shower, I feel like a new person eager to return to my book. I wind up able to write longer, because of time spent in nature.

A writer’s lament is that her job is never done. Just as a garden is never finished; something’s always coming up, whether it is noble and bountiful like the Culver’s Root, or unhealthily dominant, like the pesky unnamed green vine that shoots up and twists the good guys down to the ground. Such drama to clip those vines and attack their roots. 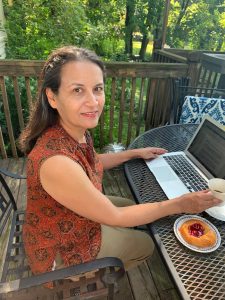 I’ll always have writing work to do. But thank God for it. The volume of my work fills the void. Having a creative project at home gives order to a life when rules have evaporated.

I do not know the future. Come August, I’ll probably be done with edits to my third Perveen Mistry novel. Maybe not.

What I do know for sure is that the Black-Eyed Susans are going to burst into full, glorious bloom, and the bees will be drinking their fill.