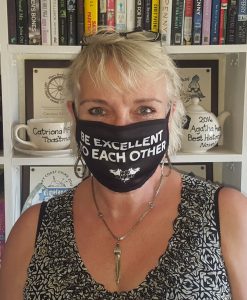 A novelist I greatly admire wrote her last blogpost in September. Catriona McPherson, formerly of the Femmes Fatales, declared that that with the election ahead, so much work needed to be done that she felt it useless to write about “cats and courgettes”—nor did she want to turn her blogposts into a political soapbox.

Catriona (pronounced Catrina) comes from Scotland and is one of the funniest mystery authors on the planet. She was writing with a wink, but the truth is, writers are constantly self-censoring. It occurs when we write novels—editing out lots to make them better—and when we offer up essays to the internet or print publications. We become known for one thing—and people expect us to be amusing. Typically, we keep dark, pressing worries and political opinions to ourselves.

During the months after Catriona quit blogging, her activism was substantial. She penned 240 personal handwritten letters and mailed them to voters all over the country in the Vote Forward movement, something I also participated in (with just 40 letters written). Currently, Catriona’s working on letters to voters in Georgia. All the while she did this, she launched a new novel, The Turning Tide, featuring her clever and charming Mitfordesque heroine, Dandy Gilver, who lives in 1930s Scotland. 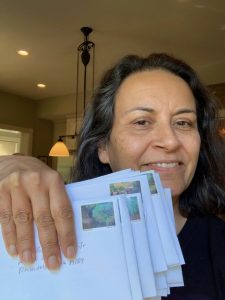 I’m glad Catriona put her priorities the way she needed this fall. And we’ve got to credit today’s readers for their choices. Since the pandemic, reader choices are trending toward social activist and apocalyptic books. Although there’s nothing wrong with the historical novels we write, either!

You might be reading this particular blogpost because you follow Murder is Everywhere, a blog built by ten writers whose crime fiction set outside of the US. Or you’ve found my blogposts cross-posted to my website and Goodreads and my Amazon page. Some information you are learning about me—the protests I participate in for Black Lives Matter, women’s rights, post office service and voting inclusion—is probably not the reason you Googled me. Yet I am someone who writes about a female lawyer in 1920s India whose concerns are national emancipation and civil rights for women. What I care about is probably not a shock. 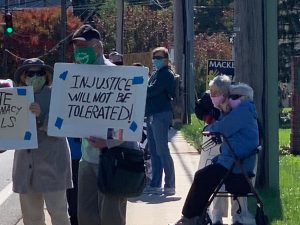 Writing about politics is most definitely allowed in Murder is Everywhere, and I learn a lot listening to the accounts of my fellow bloggers, especially when they draw cultural parallels with the past or in other countries. You must sample the words of my co-conspirators Annamaria Alfieri, Cara Black, Kwei Quartey, Caro Ramsey, Zoe Sharp, Jeff Sigler, Michael Stanley, and Susan Spann to get a taste of politics and pastry around the world. 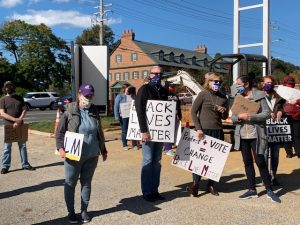 I’m pleased that there are enough of us writing that I only need contribute every other week. Fourteen days are a lot of time for events to break and then recede and for my mood to change from outraged to mellow. I can almost guarantee I’ll be writing about holiday cooking within the next few weeks and post pictures of adorable dogs on the hunt for crumbs.

The cozy and the distressing, all part of the world we live in, and I thank you for being here. 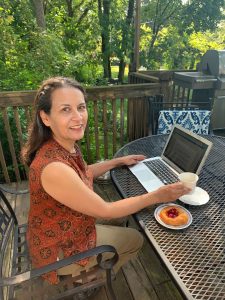