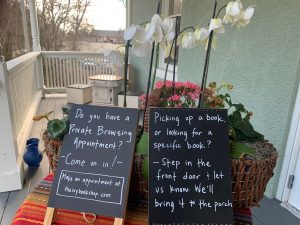 Have you ever frequented a bookstore so often it became a second home?

From the moment in childhood that my parents permitted me to walk to our neighborhood bookstore, I’ve engaged in this kind of squatting. From Micawber’s Books in St. Paul, to long-gone independents in Baltimore and Washington D.C., I’ve been an independent bookstore regular.

For the last eight years, I’ve been a homing pigeon to The Ivy Bookshop, just a few miles from my house in Baltimore. The Ivy Bookshop started in 2001 as a small, quite genteel general bookstore. I was happy to sign stock there, but there weren’t many public events. What a change the store underwent with its second owners, Ed and Ann Berlin. I met them when I returned to life in Baltimore after a brief exodus to the Midwest. I quickly learned this wonderful couple wanted excitement in the store and would do everything to make writers feel like family.

So I was no longer just sitting in a chair paging through books. It was a thrill to be part of a bookstore that aimed to make local and international writers feel welcome. The store newsletter kept me abreast of many creative activities ranging from writing workshops to book talks. The Berlins were so successful in building community that they opened Bird in Hand, a bookstore-coffee shop near Johns Hopkins, which was easily accessible to people without cars. This shop also succeeded, with a younger, diverse customer base, some of whom were mostly there for the coffee. 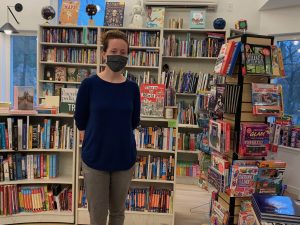 Ed and Ann saw retirement on the horizon but were adamant the store should not be left looking for its next buyer. That’s how bookstores often lose their footing. When Ed met Emma Snyder, the executive director of PEN-Faulkner Foundation, he learned the former Baltimorean dreamed of starting her own small business in Baltimore. He lured her in, and she became a a part owner in 2017. She became The Ivy’s sole proprietor in 2019.

I still visit with the Berlins, who live about a fifteen-minute walk from my house. Recently, Ed gifted me with what he created during retirement: ADRIFT, a memoir that’s full of art he’s collected and stories of his travels and adventures. The built the Ivy into what it was—and they continue to be an important couple in Baltimore’s cultural life.

Under Emma’s care, Bird in Hand and the Ivy Bookshop continued smoothly; but like Ed, she was always thinking ahead and trouble-shooting. Emma looked at independent bookstores around the country that had survived the expansions of Barnes & Noble and mail order behemoth that is Amazon. She deduced most secure bookstores were located in buildings they owned, so they were never subsequent to rent hikes and other problems related to tenancy.

The obvious question arose. Should the Ivy leave its tiny space in a well-known strip mall to build something larger and with more economic resilience? Would the Ivy’s customers, used to 18 years of bookshopping at a strip mall, go somewhere else? 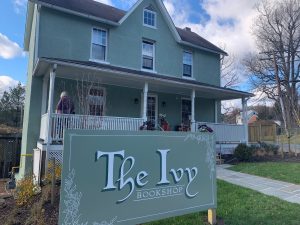 A charming green Victorian for sale two blocks from the original Ivy Bookshop provided the answer. The former church had a high ceilinged, long and wide room perfect for browsing, plus plus multiple other rooms. The property came with almost three acres of well-groomed lawns studded by trees and shrubs—quite unusual for any bookstore. There was a meditation path, a vintage gazebo, and a vast sheltered outdoor patio. There appeared to be enough room to open a coffee shop within the store, and to even keep a small apartment for the use of writers in residence or traveling on a book-signing journey. 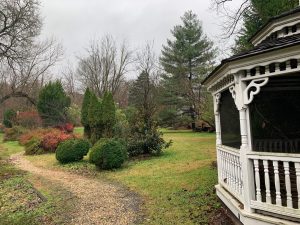 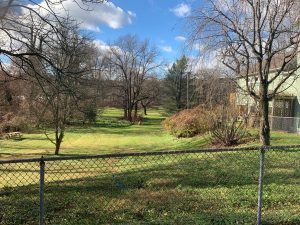 Emma bought the property and renovations were well underway when a virus began spreading around the world.

Not only did Coronavirus slow the new shop’s buildout, it made in person shopping at the existing old stores unsafe. The Ivy closed down for browsing entirely and pivoted to taking book orders online and having them fulfilled by drive-to-home and mail deliveries or curbside pickup.

During this time, the Bird in Hand bookstore became a drop-off point for a Baltimore city CSA farm to leave bags of produce for people, something I was grateful for. Even though customers couldn’t enter the store, the Ivy carefully set out tables holding the CSA food. They kept making coffee and serving pastries, but it was to patrons sitting outdoors at distanced tables. Online, both stores hosted online book talks to promote authors who were releasing books into a world where there were no longer in-person book signings. 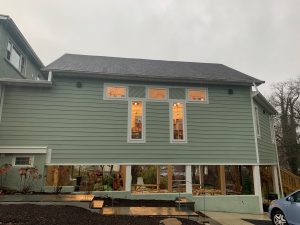 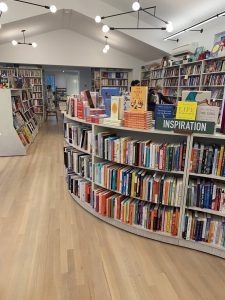 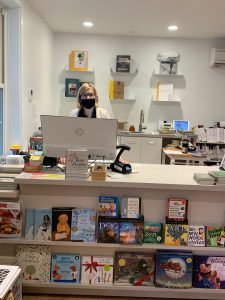 Despite the pandemic, renovation did proceed to completion and in October, the Ivy re-opened, following city rules about social distancing and reduced capacity.

I went for a private browsing appointment this week and discovered a bright, roomy space that is a book-lover’s dream. During my recent visit, I saw a constant steam of solo booklovers coming to pick up book orders or browse with appointments (it’s open to limited capacity walk-ins after 2 each day). On my way out, I saw shoppers outdoors browsing in the covered patio. 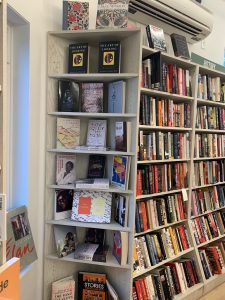 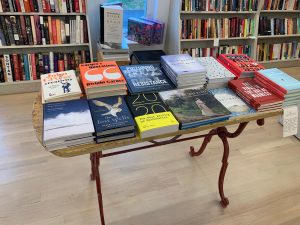 It had been so long since I’ve shopped for anything except food or essential supplies. Passing by bookcases loaded with colorful titles, I felt my spirits rise. I left with four bags of books, knowing that I’ll be back many more times, and that in June, when my next book releases, I can have a garden book talk.

If you are not a person who often gives books as gifts, now is the perfect time to try it out. A small effort this month can make you part of a bookstore family’s happy ending. 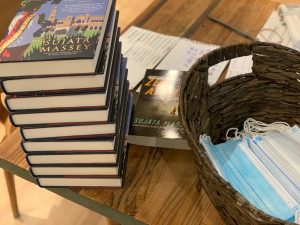 Signed copies of Sujata’s books are always available by mail order from The Ivy Bookshop. She’s also holding a Zoom talk about The Sleeping Dictionary at 6:30 p.m. EST on Dec. 14, 2020. Send her an email with the subject line Sleeping Dictionary Book Talk if you’d like the link.