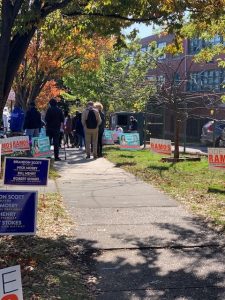 In the early hours of Wednesday November 4, I am running on fumes and bittersweet chocolate.

I stayed awake much of Tuesday night, watching and waiting as the votes roll in for the 2020 presidential election. Where was the easy win for Biden that I expected?

I voted about a month ago, as an absentee, which in Maryland meant that I filled out a ballot the Board of Elections mailed to my home. I then carried it to a locked ballot box placed outside one of my favorite places, the Baltimore Museum of Art. Two days later, I got an email saying my ballot was received, and a few weeks after that I was notified that my vote had been counted.

My situation was pretty ideal, and I appreciate Maryland’s decision to start counting absentee ballots as they arrive, rather than waiting to open the envelopes on election night, as is happening in Pennsylvania. In Pennsylvania and other swing states, the mail has been markedly slow, and many people didn’t get absentee ballots in time, and don’t have an assurance that their board of elections has their ballot to count.

The waiting game is not new for me. As a writer, I must have patience with myself to make it through the process of writing a book… and then seeing the publisher bring it to the bookshelf. As a mother who adopted two children internationally, I had long waits that were filled with longing and worry for the babies who could not join me right away.

Currently, I am waiting for a vaccination against the coronavirus that might be on the market by springtime… or some other time.

56 years of waiting have revealed that obsessing about the worst, while waiting, doesn’t change the outcome—or the way I feel, once destiny is revealed.

What I did today, to get through the wait for election results, I spent my day going through a copy edited manuscript, doing some light cooking. Almost all day I live-streamed rousing alternative rock and funk from my favorite radio station, the Current, based in Minneapolis. I don’t usually fill my day with live radio, but this time I welcomed the distracting beat. 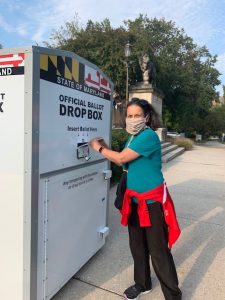 I kept walking my dogs. After lunch, I drove over to the polling station at Barclay Elementary School and smiled to see a line of people almost as long as the block. Someone was playing music on their phone, and there was a festive sound to people’s conversations. I drove to another larger polling place, where there was no line, making me think the staffing and organization was efficient, or more voters in that area had filed absentee ballots.

When you work as a campaign volunteer—as I have in the prior three presidential elections—you get a small, personal snapshot of what’s going on. It usually feels very optimistic, and I am good at talking myself into thinking the rest of the country is like the people I’m talking to.

But at the moment, my spirit is stressed. I suspect I’ll be at a “Count Every Vote” demonstration on the street later today. I voted for Biden-Harris, for many reasons, including Trump’s reckless endangerment of people’s lives by not mounting a serious pandemic response. I thought that the rising death toll in red states would have meant something to the people living there.

Still, nothing is set. Michigan, Wisconsin and Pennsylvania will take days to count votes. And it would be good if all votes from overseas citizens arrive by mail to be counted… and our mail is running slow.

I have to remind myself that a few extra days, or even a week, is nothing compared to the distress of the last four years, when environmental regulation collapsed, and jobs and lives were lost for no good reason.

And this is why waiting does not mean giving up.

3 thoughts on “What a Wednesday”