I came to the Mid-Atlantic at age 18,  so I cannot claim to be a Mid-Atlantic native. I didn’t marry a local man, either—I married someone from the Deep South. Yet I’d like to think Tony and I have thoroughly embraced this area for raising our family, building friendships, working hard, and planting our dream garden.

Light-snow winters followed by sunny warmth from April to September make vibrant spring, summer and fall gardens. It’s easy for strong plants that survived here for millennia to spread and thrive in home gardens without the watering can or sprinkler. Maryland, Delaware, Virginia, Pennsylvania abound with a diverse range of flora. If planted in supportive layers, these trees, shrubs, flowers and vines shelter each other and feed helpful insects and animals. 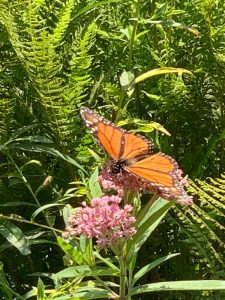 A few beneficial plants, like swamp milkweed, are the only food that newly hatched monarch caterpillars can eat before they turn into gorgeous winged beauties. (Milkweed grows in different varieties in other parts of the country, too).

A few years ago, I had the grass removed from the small double gardens in front of my Baltimore house. I planted the soil with an assortment of Mid-Atlantic natives. My novice’s theory was that if most of the native plants I picked were of varieties taller than two feet, it would mimic the feeling of the English cottage gardens I love, but would be totally native.

It worked too well.

I now have tall, sprawling forests of mountain mint, rudbeckia, coneflowers, bleeding heart and liatris on either side of my front walk. I’d heard the rhyme about a garden sleeping, creeping and leaping as the first three years pass. In year four, this garden is booming with some seven-foot flowers that need to be re-homed! 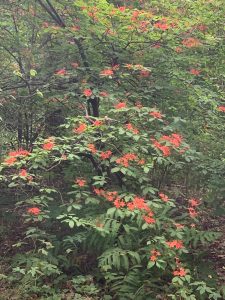 My garden is healthy, but it’s not glamorous. When I look at garden magazines, I sometimes envy the aesthetic glory that comes with choosing plants for beauty, rather than whether they help insects and animals.

But I believe in natives with all my heart, and I believe that natives can be used decoratively in many different ways. I need to see it to believe it—so I went to visit the Mid-Atlantic Native paradise called Mt. Cuba Center.

Mt. Cuba Center is an old mansion surrounded by more than a thousand acres of undeveloped countryside in Hockessin, Delaware. The place began in 1935 as a 126-acre wedding gift from the du Pont family to the newlyweds, Lammot du Pont Copeland and Pamela Cunningham Copeland. At the time, Pamela appeared the perfect country lady; nobody knew she would emerge as one of the most forward-thinking horticulturists in America.

The Copelands’ handsome brick colonial revival house started out with proper, pretty plantings of perennials of all types bordering the brick paths. But as years passed, Pamela became more interested in the native plants of the area. In the late 1950s, she hired landscape architect Seth Kelsey to revise the gardens to be natural—highlighting plants of lower Appalachia in a beautiful way, and tucking man-made ponds at the end of forest paths, and so on. I find it refreshing that the Copelands became serious gardeners more than twenty years after getting married—a similarity Tony and I share with them.

Lammot DuPont Copeland passed away in 1983, Pamela Copeland wisely established the Mt. Cuba Foundation before her death in 2001. Since that time, the foundation has added adjacent packages of land and expanded naturalistic design education. Some of the most useful features are trial plantings of popular native plants to help the public figure out how to incorporate the most successful cultivated natives in their own homes. The public can walk along on small guided tours by volunteers who clearly practice what they preach. 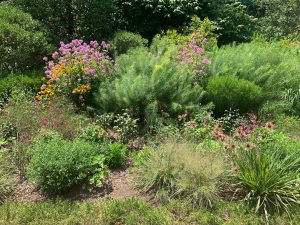 Mt. Cuba has greatly expanded its boundaries. Last year, the Red Clay Reservation and Mt. Cuba merged, so there is now a grand sweep of protected land to serve as a haven for endangered plants and wildlife. In all, it’s almost 1100 acres. I can only imagine how thrilled Pamela Copeland would be to see this. 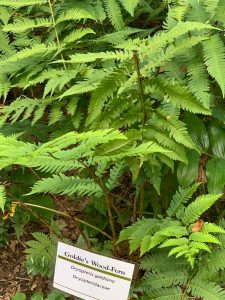 Lucky for me, Mt. Cuba is less than two hours drive from my house. It seems that in the Mid-Atlantic, you can get almost anywhere—from beach to mountains to city—in about an hour or two. 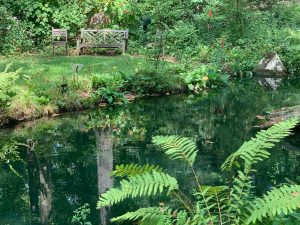 On a lovely day in late July, I drove out to Mt. Cuba with Tony, our picnic basket, two straw hats, and bug spray. Temps were in the 90s, but because of the shady tall trees, it felt more like the 80s. And we didn’t need our insect repellent—maybe because there were so many beneficial insects devouring mosquitoes?

I had been here once before, in late spring, so the ephemerals were not showing their small sweet faces, but bolder colors were on stage. Along the great stands of milkweed, the monarch butterflies drank pollen and debated where they would lay their eggs. 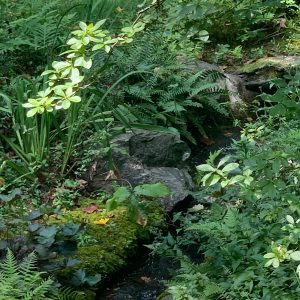 How red the native azalea was! How delicate, the pale green ferns. Dragonflies zoomed over the ponds, and tiny frogs swam with elegance. 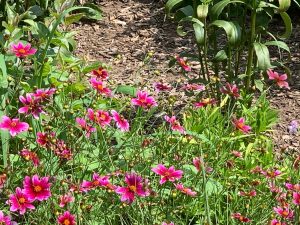 As I sat on antique lawn furniture eating a cucumber sandwich and drinking a cup of tea, I contemplated the gardens’ rolling, green hills, utterly devoid of street lamps, roads, and cars.

I realized that Mt. Cuba is more than a native plant sanctuary. It’s a living embodiment of “This Land is Your Land”—the heritage we can’t risk losing. 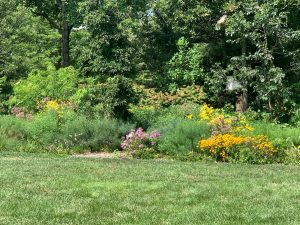