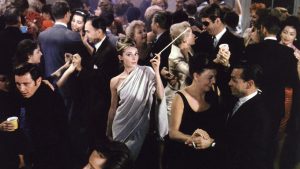 A crowded party is almost always considered successful. When the guests pile in and you can’t even reach the buffet, it means you are at a happening place. This is why there are maxims like, don’t spread a party too thinly through a house and garden. Get everyone in the living room, or around the pool, so the energy explodes.

In books, it’s a different matter. Too many characters can subtly derail the story, no matter how necessary and fascinating they seem. The chief problem is readers forget who they are.

One of the biggest challenges for me as a writer is whittling down the characters coming to the party. It isn’t until a book is close to done that I realize I allowed in too many characters.

I’m writing mysteries set in  Bombay. Even in 1921, the city was crowded. I can rationalize all the way from the docks to the hills that my story must have plenty of characters because that’s the way that cities are. Regardless of time period, most mystery series have “regulars” reappearing in various books who might be fellow crime-solving associates, family members and friends, and the suspects. The trick is giving everyone just enough time—and vacations away, if they really don’t serve a purpose in a particular story.

Right now, I’m working on a mystery set mostly in a Bombay college. I’ve been writing for almost a year. During this time, I’ve created five important undergraduates, five professors, two adminstrators, a college guard, two servants, and the college lawyer. That’s 16 people—about half of the total number of players in the novel, which certainly includes protagonist Perveen Mistry, and Perveen’s family and friends, police and legal figures.

This week I started a reducing plan, but only three have been cut so far. The process made me wonder whether there is a magic number of characters in a mystery.

I am too frantic to take time away from my book to read several others, so I took the easy route and spent 90 minutes streaming a high-quality mystery program. I am entranced by Endeavour, which features a young Inspector Endeavour Morse in 1960s Oxford. An excellent show in Season One, “Trove,” had nineteen characters of note, with eight supplementary characters (aka extras) speaking just a line or two.

I felt like I followed it all brilliantly. A few days later, could I recount the names of the show’s characters excepting Morse and his boss Fred Thursday?

Absolutely not. That is the big difference between visual and literary storytelling. Watching Endeavour, I only had to recognize a character by sight—and what others said about that person—to know who they were.

There were some things, though, that Endeavour’s writers did that led me to think about some self-improvement. There were rarely more than two characters of the same type—i.e., two people who were friends, two people who were coworkers, a family unit such as mother and child. I could eliminate a few characters that are very similar. Do I really need four boys under the age of twenty?

Another question I’ll ask myself is why each character needs to be in a novel. The most important characters are emotionally rich, not just information-givers. These are recurring players in Perveen’s life, or are people with enough suffering they might feel tempted to commit despicable acts, or shield such acts from knowledge.

Perveen is a lawyer, and I enjoy writing scenes where she is collecting secrets from various characters who’ve been disregarded by the British colonial authorities. Yet I realize Perveen can still learn about minor characters when other people narrate what they said. And fewer interviews mean fewer scenes, and the heavy cloud of cigar smoke begins to lift.

I might throw a party when I finish writing this book. It will not be a standing-room-only bash: the kind of party that I would have loved twenty-five years ago. The gathering I’m thinking about it looks more like one of the early dinner parties in And Then There Were None.

Not too large, and not too small.

And without terminal losses.