It’s too easy to twist your ankle while walking through India. Streets and sidewalks have irregular surfaces, and there are many distractions, ranging from speeding cars and motorcyclists creating their own laws to horses and goats.

So I only feel like my footing is truly firm indoors, and I am always glad about the safety of a smooth tile floor.

In Fort Cochin, I stayed in the historic Brunton Boatyard, a hotel built on the grounds of a Victorian shipyard. The narrow red clay tiles on the first floor appear to be strictly business. These tiles have an industrial look and are still holding up after centuries of heavy rolling carts—and now, suitcases. 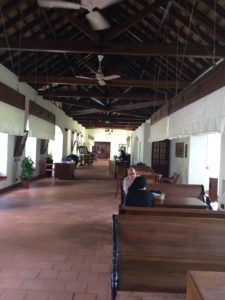 Nineteenth century Indian royals, on the other hand, used tiles in a grand manner that they’d seen themselves on European tours. Palace tile that I’ve seen is typically giant blocks of pure black and white marble. Not especially original—but very silky underfoot. When I checked into a guest room in Shiv Nivas, a hotel housed in the old guest wing of Udaipur’s City Palace Hotel, the floors felt cleaner than anything I’d ever stepped on, and probably a lot of it had to do with the contrast in air temperature and marble’s natural chill. Before the days of air conditioning, floors were an important cooling element. 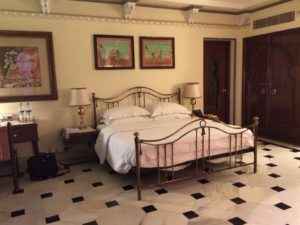 In Calcutta, zamindars (landowners) had magnificent homes in North Calcutta built throughout the eighteenth and nineteenth centuries. When I visited a friend who lived in such an aging treasure, I marveled at the veining in the fine marble tiles in the bedrooms. 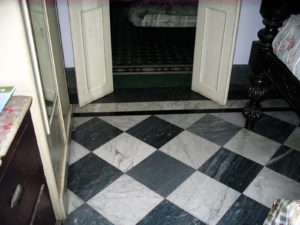 The most joyful tiles that I’ve seen to date are the encaustic (hand-made cement) tiles from the late 19th and early 20th century in Western India. The first encaustic tiles used in India were Minton Company tiles exported from England.  The British government wanted Indians to buy their tile (as well as most other products) from England. Wanting to suit freedom-minded Indians who still wanted modern tile floors, a Parsi businessman, Pherozeshah Sidhwa, started Bharat Flooring Tile Company in Maharashtra in the early 1920s. These tiles had tremendous patterns crafted to exacting standards, and the backs of the tiles had a map of undivided India stamped on them. 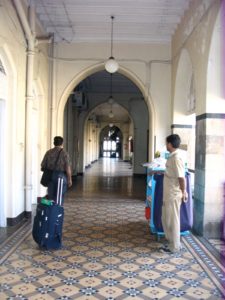 Bharat Tiles are firmly cemented in some of the favorite places I’ve stayed in India, like the Royal Bombay Yacht Club, above. 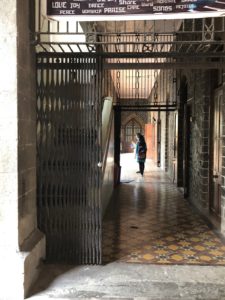 Wilson College in South Bombay, pictured above, is full of original detail. The school was founded by a missionary, and I don’t know if the tiles are Indian or English.

I’ll make an educated guess that these encaustic tiles in Mahatma Gandhi’s Bombay residence are Bharat Tiles. After all, Gandhiji was the founder of the Swadeshi movement encouraging Indians to buy Indian-made products. 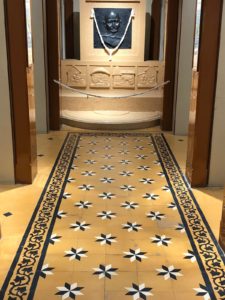 When I recently traveled to Ahmedabad, in the western state of Gujarat, I stayed at the House of MG, a boutique hotel carved out of a grand old residence of the textile merchant, Mangaldas Girdhardas. Mr. Girdhardas expanded his original 1924 residence to have two large wings for his sons and their families. The original wing has black and white marble tile floors; the sons’ sides have brilliant, geometric-patterned encaustic tiles. 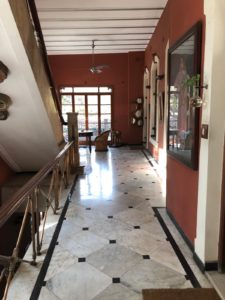 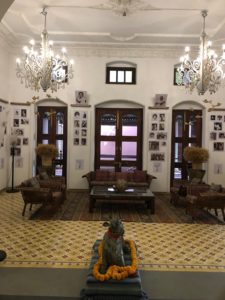 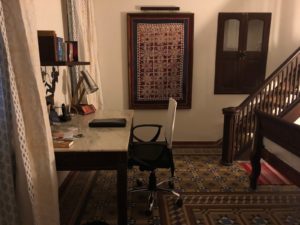 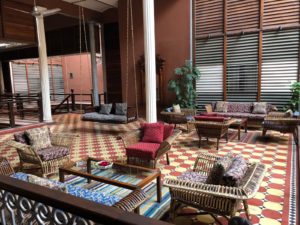 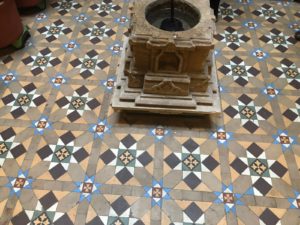 When I toured Ahmedabad, I visited more historic havelis, such as the one above, and saw plenty of vibrant cement tile. By now I’d noticed that the prominent colors for all these tiles were golds, reds, and blacks. Yet that color scheme did not determine decorating. Indians decorate in many color schemes atop the harvest-colored floors.

It’s heartening that Bharat Flooring Tile Company managed to create such an industry disruption in 1920s Bombay that the British themselves paid to have many public buildings fitted out with Bharat tiles. And the company lives on today under the same name. They have reissued old patterns and seen them go into old buildings undergoing restoration and new restaurants.

From the British colonial days through independence, Indian tile floors are too tough to show evidence of all who’ve stepped on them. Yet I feel that history surround me every time I go through a door into a hotel or school with a patterned tile floor. 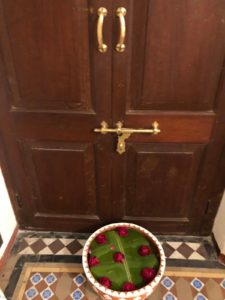