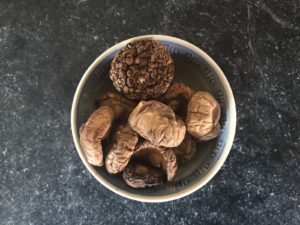 After we had a dead elm tree cut down last year, little white mushrooms sprang up on the wood-flecked ground.  I was nervous because we had just taken in a Yorkshire Terrier puppy with an appreciation for organic material. Daisy snuffles up berries, pods, pinecones and black walnuts faster than I can stop her. But for some reason, she stayed away from the tiny white mushrooms, which I think might be Chlorophyllium Molybdites, the Green Spored Parasol, a poisonous mushroom that looks like a white button mushroom.

But Daisy ignored the mushrooms, just as I don’t see rabbits, birds and squirrels eating them. Somehow they must have a genetic aversion. It isn’t that way for people. My eyes tell me that the mushrooms in my garden are beautiful as the ones at a high end grocery. I look at such mushrooms and imagine them sautéed in butter. 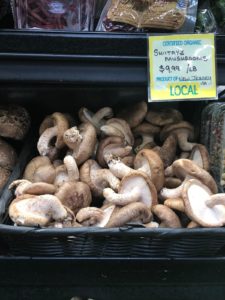 Mushrooms have power: both for the bad and the good. Over the winter, I did some reading and learned that the oyster, enoki, maitake and shiitake mushrooms are taken by patients to fight tumors. And there’s one very powerful Chinese mushroom, the Red Reishi, that has been used to treat many diseases, including cancer.

What about the small wrinkled cone-headed mushrooms that grow wild in the United States called the morel? I adore the morels that grow plentifully in the upper Midwest and are hand-collected in the wild and sold in co-ops. However, I’ve learned there’s a “false morel” that looks just like it that’s poisonous. Umm….

And let’s be realistic. Morels are too pricy to be eaten more than a few times a year. However,  an 8-ounce container of local oyster, and white beech and brown beech mushrooms (also known as bunapi and bunashimeji) is about $5.99 at the local organic grocery in my neighborhood. If I get up early enough on the weekend, I can buy a similar portion of fresh maitake, fan mushrooms, chantarelles and shiitakes for $5 at the farmer’s market. I cradle all these unwashed mushrooms in a cotton bag that stays in the refrigerator. They stay happy and resist turning slimy for up to two weeks—though I’ve usually finished them well before that time. 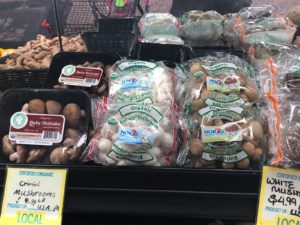 As spring arrives, I realized that mushrooms have nudged themselves into becoming 2018’s food of choice. I’ve cooked a lot of them, and I’ve savored truffles twice—both in a truffle mayonnaise on chips at Charleston Restaurant in Baltimore, and in the truffle-stuffed ravioli at the Fearrington Village Inn in North Carolina. These are the splurgiest, most umami-laden mushrooms around, reputedly costing $2800-3200 a pound, if you get the white ones. But a little goes a long way, because the flavor is so tremendous.

Making a deep dive into a “food of the year” has become a habit for me. When I was researching India’s Parsi community in 2016, I found myself cooking more eggs in Parsi manner, often poached atop vegetables. This was a fantastic and easy food to focus on.

2017’s food of the year was quinoa, because I finally learned to make it taste good, and it went into soups, salads, and as a rice substitute. In 2009 it was homemade bread (I gave up that practice, never quite mastering it, and knowing that I didn’t want to eat bread twice daily to use it up).

I have a head start on the mushroom game because I’ve been cooking mushrooms  for years. Three out of four members of our family like them (not a bad ratio considering they are “fungi”). One of our favorite family dishes for many years was the mushroom stroganoff from Deborah Madison’s Vegetarian Cooking for Everyone, but that calls for ordinary large white mushrooms. We were happy in the past, but I think cut-up oyster mushrooms are going to vault the dish to the stratosphere. The mushroom risotto recipe I like comes from The New Vegetarian Epicure, and its author, Anna Thomas, isn’t playing. She calls for a mix of morels, porcini and shiitake, as well as dried porcini as a flavor builder.

You don’t need a cookbook to make a fantastic mushroom dish. Sauté them with onion and add lightly beaten eggs for an incomparable scramble. Garam masala or curry powder is the final touch.

For lunch, I love to make a quick Asian noodle soup, starting with sautéed onion, ginger and enoki mushrooms, and throwing in either vegetable, chicken, or beef stock. A spoonful of white miso goes in along with a little chopped raw spinach or bok choy. That last bit cooks two minutes and then I ladle in a bowl with scallions on top.

Or how about a mushroom gnocchi bowl for supper that’s ready in less than thirty minutes? Start with a cup of mixed specialty mushrooms such as shimeji and maitake, all broken apart into medium sized pieces; a quarter cup of chopped onion; two minced garlic cloves. Sauté in butter and olive oil until lightly brown and then pour in 4 cups of any vegetable stock. Simmer ten minutes and then throw in potato gnocchi from the store and 1/3 cup of frozen green peas. The gnocchi will be tender in about 3 minutes; you’ll know when they rise to the top. Toss minced parsley on top, if you are fancy, and ladle it into bowls. 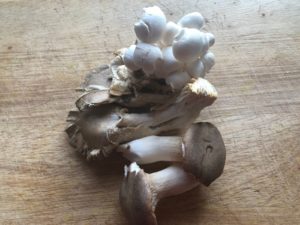 I don’t know that eating small mushrooms with a grand reputation will save me from disease. But I eat them several times a week now. I might even try growing them. I’m eyeing an  “organic mushroom farm” I saw at Mom’s Market. The final frontier would be taking a mushroom walk with a forager, but after what I’ve read about evil lookalikes springing up next to morels and chanterelles, I’m not sure it’s worth the risk.