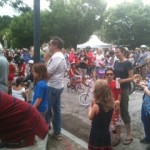 A year ago today, July 4, our family drove into Baltimore for Act III of our life here. It was quite hot–100 degrees plus–and broken cherry, elm and oak trees were strewn across the streets. A week earlier, a massive derecho storm had devastated sections of Maryland–and electricity was absent in half the steaming city.

From Minnesota, we’d signed a sales contract for an 1897 house with an amazing location in the old neighborhood. We didn’t know that, while we were driving in to Maryland from the midwest, the cruel derecho would throw a giant old elm on its roof! That Fourth of July, we drove as fast as we could get away with, but still missed out on the morning’s annual Independence Day parade down Roland Avenue. It was three o’clock when we arrived at our friends’ comfortable shingle style cottage on St. Johns Road. I was overjoyed to stop driving and have a glass of lemonade, a shower, and space to stay in their home (which had not lost its power and had air conditioning). We were immediately invited to a couple of parties in the neighborhood that night. This invitation bonanza was classic Roland Park-Evergreen-Tuxedo Park-Alonsoville hospitality: a big reason we’d come back.

I have enjoyed living for short periods in Asia, Europe, on both coasts and the upper midwest of the United States. Moving around gives me the chance to discover new roads, words, foods, art, and friends. Baltimore had such surprises for me, during Act I of my residence here: the decade of my college and newspaper days. Cracking open steamed crabs at porch parties, developing street smarts while reporting on events in rundown East and West Baltimore, buying old silver at auction at Howard Street–all of it was good learning. I left to go to Japan with my new husband, and after a couple of blissful years there, we returned to the city where we’d first met as students. Act II stretched into 13 years devoted to building a fiction career and a family. We also became experts on moving: going from two different apartments within the same 1930s building in Tuscany-Canterbury to a small Dutch colonial in Evergreen and finally, to a rambling shingle style house in Roland Park. There I learned to strip wallpaper off of old paster and lead paint from wood moldings and make Martha Stewart birthday cakes for my children. The house was built with love and sweat, and it hurt to sell it to move away from Baltimore again.

Based on my fondness for exploration, I believed that I could fully acclimate to another place, but I never stopped missing Baltimore. I had to come back–even if it was to a senior citizens’ home, I told my husband. But in spring of 2012, we received a surprise offer on our Minneapolis house when it was not even for sale.Surely there was an angel on my shoulder, wanting to wing me back. And within a month of coming to terms with the buyers, we were on the freeway headed back east.

They call this week’s holiday Independence Day. For me, it’s more of a Dependence Day–realizing that my life is all the richer because of continued connections with people who know me.