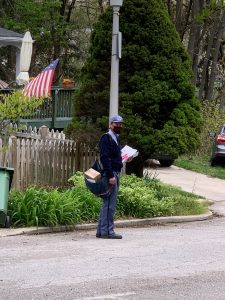 This is a post about voting in 2020… but it begins at the time I was trying to become a citizen.

In 1998, I was a longtime green card holder who had finally made a citizenship application. Friends had told me not to be nervous at my US citizenship exam. They said it would be ridiculously easy. I was 34 years old, a newspaper reporter with a British passport and an American accent. I was used to talking to every kind of person.

But when I went into the little room at the Baltimore Immigration and Naturalization Service and met my examining officer, I knew it wasn’t going to be simple. The questioner was an unsmiling American man with a curt manner. After running through the basics on my name, age and address, he casually led off with this question:

“What’s the last year you voted in a US election?”

He made it sound innocuous, and of course, it wasn’t. This was a trap question to weed out those who had committed a deportable offense. I answered truthfully that I had not voted, but that question made me realize how powerful voting might be for me in the future. 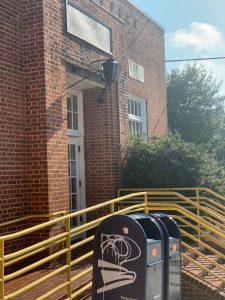 I got enough questions right that I passed and got both a certificate of naturalization and a U.S. passport. That fall I cast my first vote in a presidential election and have been voting ever since. As years passed, I found myself going to meet-and-greets for candidates at people’s homes, phoning potential voters, going door to door, and even driving voters to their polling stations.

So much of that activity cannot happen this year, because many campaign organizations are moving to remote strategies to keep from spreading COVID-19 infection. I get my politics by watching TV, reading the paper, listening to the radio and meeting candidates and activists on zoom. There’s a letter-writing campaign, Vote Forward, that I hope to participate in. A writer should be able to write a few letters encouraging people to find a way that works for them to safely vote.

Here in Maryland, our Republican governor, Larry Hogan, has declared a state of emergency which means he can decide how we vote. He’s decided to keep in-person voting. At the same time, he’s acknowledged that thousands of election judges are unable to staff the polls. His solution is closing Maryland’s 1600 polling places. Instead, there will be 360 voting centers to serve the state. I’m waiting to hear if there are enough people willing to work at these places to make it possible to cast votes in a timely fashion and if the voting centers might also have boxes where absentee ballots can be dropped off. That’s a strategy I’m hoping to participate in, having read the thoughts of New York Times columnist Jamelle Bouie.

And while Marylanders are asking for the whole state to receive mailed absentee ballots, what’s happening instead is he’s requiring every voter to send in an application requesting a ballot. When I went online to request a Maryland absentee voter ballot today, I dutifully filled out every bit to find out I’d created a “system error.” Fortunately, I had more internet links to try, and at a different site, I was successfully registered to get an absentee voter application. But there you have it: Maryland has a terrible online system, and that’s if you have the energy to try.

Beyond Maryland, absentee voting is hard. Will the ballots come to us, and will they be received by the vote-counters in time? In May, Trump appointed a campaign supporter, Louis DeJoy, as the new postmaster general. Since DeJoy’s taken over, he’s fired many experienced officers in the system and made changes that have led to infrequent mail delivery for our household and almost everyone I know. In Minneapolis, the post office simply stopped delivering mail to a public housing complex. Imagine that kind of effort, applied by the post office to public housing addresses in cities all over the country. 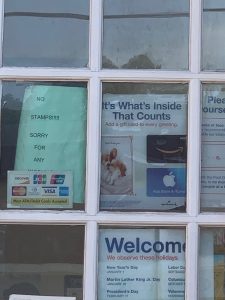 I wave when I see Tom, our wonderful neighborhood postal carrier, faithfully walking his route with a mask during these hot months. Occasionally, he has nothing but advertising circulars to dispense to the block, because the delivery truck containing letters and packages never showed up that day. And imagine having a neighborhood post office with zero stamps in its inventory!

When we all know the post office needs to sell stamps to generate income to support itself—there are no tax dollars supporting mail.

“When the post office is closed during business hours, you know you’re in a banana republic,” an irritated woman muttered as we waited in a distanced line outside the post office one morning.

Yes. And if we cannot have our votes counted, it will only get worse.

1 thought on “How to Rig an Election”