How to Feed a Writer 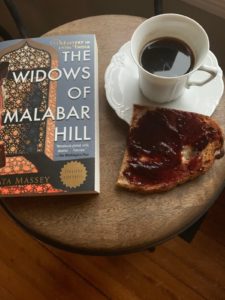 M.F.K. Fisher, the great American food writer, once stated:”A writing cook and a cooking writer must be bold at the desk as well as the stove.”

In the 1930s and ’40s, when Mary Frances began her concurrent explorations of cooking and writing, most writers did not cook, probably because these writers were primarily men. And the earliest published women writers who were lucky enough to have the space and time to do this work—Edith Wharton, Virginia Woolf and the like—were typically upper class and had household staff to feed them.

I love to write, and my escape from the stress of writing is cooking. if you follow my blogposts, you’ve seen me wax rhapsodic about mushrooms, about Parsi eggs dishes, and all kinds of food.

In my quest to spend more time on writing, I am striving to be more balanced in the kitchen—and to also explore whether certain food powers my brain to focus better. I’ve read several cookbooks with recipes promising better neurological health, but my goal is not to work with cookbooks as often as I’ve been doing.

This year I asked myself: what is the healthiest way to fill both the stomach and the imagination? How can a person too easily diverted by cooking avoid such temptation when she’s alone at home? 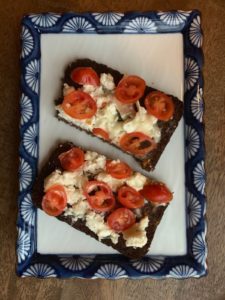 pumpernickel is a powerful base for a breakfast sandwich

Plenty of writers have decided it makes sense to write outside of the house—and to eat there as well. In this era, they are mostly at Starbucks. I prefer to think of Dorothy Parker striding into the restaurant inside the Algonquin Hotel for breakfast and lunch with her friends. Not that she used a pen at the table! It was all about joking, drinking, and probably not getting much done in the afternoon.

Okay, let’s return to the present. Have you ever tried going to a real restaurant with your laptop? While it’s nice to have eggs and toast brought to me at the table, once I’m finished with my plate and continue to write, I feel like a barnacle on the side of the establishment. And how does the writer handle bathroom breaks in the restaurant? Do I leave the laptop containing my big project on the table, or carry it to the potty the way I’d bring my purse?

There’s nothing wrong with dining at home on food prepared elsewhere. However, to undertake this needs a good deal of planning, and the food choices that look the most beautiful are often destructive. A sugar-dusted doughnut is tempting with morning coffee, but it will make me shaky and unable to concentrate within a few hours. Gourmet sandwiches from stores often stand six inches high and are made from such thick bread that they also put my insulin into overdrive. And don’t get me started on full-sized entrees from proper restaurants. If you’d like to see me snoring through the afternoon, just serve me a delicious, heavy lunch.

This year, I am streamlining my dining at home. My goal is not to spend longer than 30 minutes cooking anything during my workday. Here’s the M.O.

For breakfast I toast good brown bread from a local bakery, and I top it with a quality cheese or jam, and several times a week the toast topping is an egg scrambled with vegetables. I take vitamins and calcium on the side, and I try to drink a couple of glasses of water. I am seriously dehydrated, all the time. 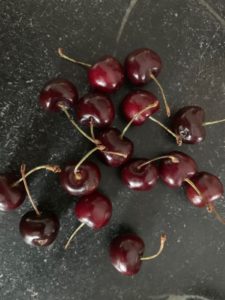 Ahh, the antioxidants in cherries!

After that, I try to write at least two hours. Fresh or cooked fruit is the second energy shot that I take around 10 in the morning. After that, I break for some activity at the gym.

Lunch is always eagerly anticipated. Like breakfast, I eat it by myself, so I don’t have to worry if anyone else likes what’s going on the plate. A fridge full of leftovers means various cups of soup, beans, small cooked vegetables, kimchee, and rice. Sometimes there’s even a half-serving of chicken or fish or a couple of meatballs. So, how is my meal different from tapas? I can imagine Dorothy Parker poking fun at my lunches, especially since they are washed down with a glass of water and a couple of Vitamin D gummy raspberry chews for dessert. 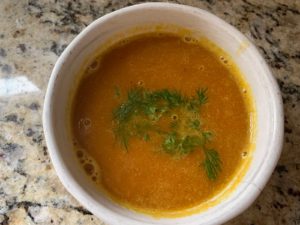 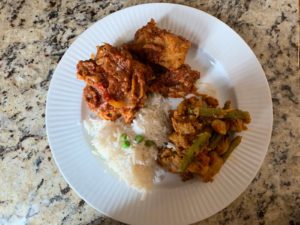 Chicken curry, rice and a melange of potatoes, yams and green beans

I work again. Around 4 p.m. I’m often craving salt. The standard snack to fill the void used to be crackers and cheese, but now that I am trying to reduce dairy, I dip raw vegetables or plantain chips in hummus or munch some almonds or cashews. If I have a sweet craving, I might slather peanut butter on a toasted waffle (I keep a few homemade ones in the freezer) or Nutella on a digestive biscuit. 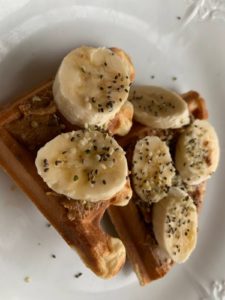 A homemade waffle with almond butter, banana, and chia topping

The writing day is done by five and cooking is once again allowed! I I relish the chance to sway between the fridge and stove and bend to lift up pots and pans. I usually cook meat or fish with vegetables and some form of rice. Usually it’s Asian or Mediterranean food—easy dishes flavored with spices and herbs—true friends with benefits.  I often use the InstantPot to pressure cook dried beans or to concoct a dal that can be eaten at a few different meals during the week. My husband likes this kind of food. My children do not.

You might have noticed something missing in my diet. It is coffee, the infamous element in a lot of writers’ rituals.

I drink about one and a half-cups of locally roasted coffee made in a French press at breakfast. I might have another cup in the mid-afternoon if I’m dead-tired and have to go out and drive the carpool or drive to a faraway book signing. But chain-drinking coffee does not make me feel grounded and focused on work—it gives me the jitters. Some therapeutic drinks that work for me throughout the day are water, black tea, green tea, mint tea, and before bed, the venerable chamomile.

Writing a book is slow work, and in my experience, it can be detrimental to the body. There have been years when I would sneak downstairs from my study to snack as a way to escape the half-written page. I’m no saint—if I know there’s chocolate in the cupboard, I may have an afternoon binge. But overall, I take a great deal of pleasure in eating this way.

Am I feeding my mind?

I don’t know about that—but I do feel sated.