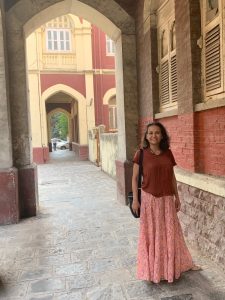 I’m filing this on my last day of a wonderful three weeks in Mumbai.

I was taking a walk through a shady, old-fashioned passageway in a typical 19th century shop building in the Colaba neighborhood. It was a delightful meander just steps from the historic Royal Bombay Yacht Club, where I spent my las few days.

With any trip, there are ups and downs. Over this trip, I haven’t had a moment of stomach trouble. However, I had a laptop fall very ill (and then recover, thanks to the geniuses at Maple Shop, as India’s Apple licensee is called). I switched the places and neighborhoods I was staying in three times and never really had a quiet night. Well, I guess it’s Mumbai, right?

I managed 20-plus interviews over this trip; I saw a new film, a popular play about a legendary actress, and a dress rehearsal of another play with a Bollywood connection (more on this one in another post). I attended an Odissi dance debut of a teenage artist. I shopped at a modern art show and filled my eyes with masterpieces of at the Bhau Daji Lad Museum of decorative arts and the Asiatic Society of Mumbai. I attended to a university lecture and was able to chat with students. I visited a historic Parsi colony and several courts of law—one of them the former coroner’s court, which I expected had been swept away since this legal process is no longer a necessity in Bombay. What a thrill to find the high-ceilinged room where cause of death was determined by a jury still exists, albeit filled with cubicles.

The one thing I could have done but missed out on was being on set for a Bollywood film shoot. Do I regret not going because it was starting close to midnight?

As I sit in the airport, I admit I should have blinked away my fatigue and gone.

Therefore, I don’t have star photos for you, but in upcoming posts I aim to share what I loved so much about this trip to Mumbai.

And that even in 2020, it’s such a joy to be able to tread through the passageways of the city back to the Indo-Victorian world of my fiction.

Whilst in India, I received the great surprise of a nomination for the 2020 Bruce Alexander award for historical fiction, and the 2020 Sue Grafton Memorial Award for a mystery featuring a female protagonist. The Lefty historical winner will be chosen by conventioneers voting at the Left Coast Crime convention in San Diego this March, and the Grafton award has been chosen by a judging committee and will be announced at the Edgars Dinner in New York in April. I am very excited and grateful that The Satapur Moonstone was enjoyed by both fans at LCC and a committee of professional writers serving as judges for the Edgars. I encourage you to check out the whole Lefty List and the Edgars List for books you might enjoy.