This blog post originally appeared on the Murder Is Everywhere blog.

He was the kind of man who disagreed with his government—and sought to reform its operations. He broke laws to spread his messages of unrest and felt forced to flee, lest he spend the rest of his life in prison.

In search of shelter, the radical traveled undercover to countries that were unfriendly with his own. But the path was complicated, as he could not use his passport. The travel papers he hoped that other governments might produce for him weren’t forthcoming. And then, when it seemed like he’d settled into a powerless rut, the fugitive traveler popped up on another continent, in the heart of a nation willing to help him wage war on his homeland.

Edward Snowden? Sorry, but that’s not the guy I am writing about.

Snowden was preceded 72 years ago by Subhas Chandra Bose, an Indian freedom fighter who outfoxed the British government of India and made it possible for a hostile army to invade his homeland. Which should make everyone think twice about what Edward Snowden can still accomplish.

Mr. Bose’s adventure began in 1897, when he was born in British India as the younger son of a wealthy upper-caste Hindu lawyer. Although he attended elite, English-medium schools in Calcutta and was tracking toward a conventional career in civil service or law, he witnessed enough discrimination to change his plan about working for the rulers of his country. The young Subhas joined Bengali political activists and rose from being a mere independence supporter to a position as an activist mayor of Calcutta. After serving a long political imprisonment and then banishment by the British government of India, he was permitted back into India in the late 1930s and promptly resumed his independence activities as president of the All-India Congress Party, and after that, his own new political party, the Forward Bloc.

Bose, who was now admiringly called “Netaji,” or “honored leader,” was enthusiastically received. Much of the population was upset at being commanded by the British to serve them in World War II when there was still no promise of a date that India might get self-rule. While the most famous independence activist of the time, Mahatma Gandhi, counseled Indians to be patient, Netaji demanded unconditional freedom and told his followers that violence against the British might be necessary.

The threat of Netaji disrupting war supply production was too much for India’s government. In autumn of 1940, Calcutta police arrested Mr. Bose on charges of plotting to deface the Holwell Monument, a proud symbol of British colonialism in Dalhousie Square. The activist had not actually laid a hand on the monument, but he was locked up under India’s War Rules, a measure that greatly expanded police rights to detainment. Mr. Bose felt his incarceration was unjust and undertook a hunger strike, weakening himself so much that the British were forced to bring him out of jail and into a hospital.

Mr. Bose—who’d suffered respiratory problems since catching tuberculosis during a two-year-long imprisonment in Mandalay in the 1920s—stayed dangerously weak. His doctors proclaimed him too ill to stand trial, advising rest and recuperation at his parents’ house. The police reluctantly agreed, stationing constables to watch the family’s handsome bungalow on Elgin Road. But their round-the-clock presence wasn’t enough to defeat the clever politico who, while resting in a curtained bedchamber, grew a shaggy beard and hatched an escape plan with his nephew. On the evening of January 16, 1941, the nephew drove away from the house with what appeared to be a Muslim acquaintance, heavily bearded and dressed in the attire of the Northwest Frontier Provinces. Many days later, the house servants discovered one of the meals they’d been leaving next to Netaji’s curtained bedside hadn’t been eaten, and the alarm was raised.

Subhas Chandra Bose had a sizeable head start on the police and, with the assistance of relatives and political supporters, traveled north by car and train through the Northwest Frontier Provinces that are now part of Pakistan. He posed as a deaf-mute, his presence explained at any checkpoints by two Pashto-speaking companions (one of whom—unknown to Mr. Bose—was a double agent informing on him for both the U.S.S.R. and Britain). The runaway reached Kabul and took shelter within a sympathizer’s home.

Like Edward Snowden, Netaji could not travel out of Kabul using his own passport; he’d made a bet that the Soviet consul would give him travel papers, but this assumption proved wrong. Bose’s helpers spent two more months trolling various consulates before Italy granted him travel papers allowing him to travel under the name Count Orlando Mazzotta.

Following advice from their double agent, the British assumed Mr. Bose would go to Turkey, and sent assassins to wait along the border there. But he avoided that route. Using a combination of car, donkey, horse and his own feet, he was guided out of Afghanistan and across mountains to the Soviet border, where his Italian papers allowed him into the country that had shunned him months earlier. Once on Red soil, he declared his true identity, but instead of getting a warm welcome, he was offered the services of the German ambassador, who put him on a plane to Berlin.

In the 1930s, Netaji had written disapprovingly of Nazi polices, although he admired the structure of their government, and socialism. Now he was facing a life-changing choice, just as Snowden had when he decided to get help from China and Russia.

A popular saying at the time, among militant Indian freedom fighters, was “the enemy of my enemy is my friend.” Perhaps Netaji followed that reasoning when he decided to take the flight to Germany. And at first, it was wunderbar. His German hosts provided equipment for him to broadcast political addresses against the British. But almost two years passed, and Hitler still hadn’t signed his statement of India’s right to self-government. During this time Mr. Bose had also married an Austrian woman and fathered a daughter, but he had begun to question his future. And the Germans may have had their doubts too, about providing endless support to an undesirable racial type.

In 1943, the Nazis offered Bose a one-way trip out on a submarine, transferring him to a Japanese submarine near the Cape of Good Hope. It was in Tokyo that received the kind of support he’d longed for. Senior officers in the Imperial Army agreed that India should be freed from British colonial power. Together with Bose, they drew up a plan for a military force of expatriate Indians to seize their country from the British.

The idea of an Indian National Army built from tens of thousands of captured Indian prisoners of war was something the Japanese had been thinking about since beginning their conquest of South East Asia. Their officers took care to treat their captured Indian POWs well and invited them to join a volunteer Indian National Army (I.N.A.) headed by Mohan Singh, a former Indian Army officer. However this first I.N.A disbanded after less than a year because few POWs were willing to desert their troops. But once Netaji arrived in Southeast Asia, and word spread that he would be the I.N.A.’s chief, their minds were easily changed. Over 40,000 Indians joined; not just POWs but ethnic Indian civilians living in Southeast Asia, including young women who would serve as combat soldiers and medics in a woman-commanded regiment. Supreme Commander Bose ordered the men and women to train together. He insisted that everyone to speak Hindi, erasing regional and religious boundaries. Seasoned Indian Army officers and senior enlisted men became his top officers, and they drew up strategies for entering and taking India. 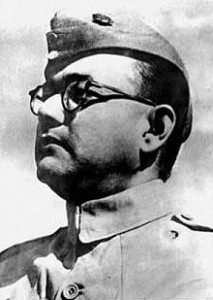 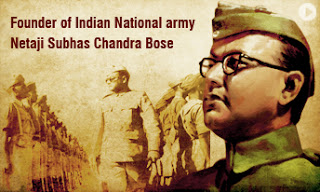 But by 1944, Japan was dragging its feet. The war in the Pacific was turning, since the Americans had joined the British. Japan was running low on weapons, food, uniforms and boots—with nothing to restock. It wasn’t easy to give the I.N.A. the supplies it needed to mount a successful invasion. Finally, though, Netaji’s troops were given the all clear to invade along with the Japanese. They entered northeastern India and easily took the town of Moirang in Manipur, and after that laid sieges against the British-led Indian Army strongholds of Imphal and Kohima that lasted almost four months. In the end the Indian Army prevailed, and the Japanese and I.N.A, retreated back to Burma, many perishing along the way from injuries, starvation and exhaustion, while the survivors were captured as POWs by the Indian Army and Allies.

The dream finally imploded after the US atom-bomb drops on Hiroshima and Nagasaki brought Japan to surrender. On August 18, 1945, Netaji boarded a Japanese military plane with Japanese and a few Indian officers, hoping for yet another ride to a safe haven. But the overloaded aircraft crashed over Taiwan, hitting the ground hard and erupting in flames.

According to the British Indian government—which received reports from the Taiwanese hospital—Mr. Bose died from severe burns within hours of the crash. Netaji’s surviving companion on the flight vouches for this story. But because Mr. Bose’s body was never seen, most Indians didn’t believe it. Some suspected he was captured by the Soviets who, angered by his alliance with Germany and Japan, sent him to a gulag. Another theory was that he disguised himself as a monk in the Himalayas—trekking down to attend the 1964 funeral of Jawaharlal Nehru. Such is the power of a vanished man on a country’s psyche.

India’s situation changed rapidly after World War II. Sympathy for surviving I.N.A. veterans inspired civilians and even many Indian Army soldiers and policemen to contribute cash toward their rehabilitation. When the British government announced the plan to prosecute several I.N.A. officers for treason or war crimes, riots flared nationwide. The unrest the government had always feared Mr. Bose might be able to instigate was happening. They could no longer count on Indians in their employ to support their rule—a major part of their decision to finally quit India in 1947.

Today, there are garland-draped statues of Netaji in most Indian towns, and the airport in Kolkata is named in his honor. Quite a few people around the world think that Mr. Snowden deserves the same kind of recognition for his stance against covert intelligence-gathering. But because of modern technology, he doesn’t need a world power or terrorist group to provide guns and uniforms for him. To inspire action by followers, all he needs is to fire up his laptop and send out a webcast. Or simply tweet.

1 thought on “From Asylum to Infamy”