There was no way I’d get to see Khaled Hosseini.
No matter how long I stood, or how high I stood on my tiptoes. The author was there–but invisible. All I could hear was his beautiful Pashto accent, and shake my head at myself for being such a groupie. 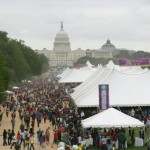 Last Sunday, I drove through DC traffic, parked in a pricey downtown garage and walked a half mile in beautiful, 70-degree weather to the National Book Festival on the Mall. The Washington Post’s tabloid section promoting the book festival had given me the full schedule a week ago and I’d let many of my friends–and even my daughter’s English teacher–know about this rare opportunity to see the California-based international literature superstar discuss his first book in five years, And The Mountains Roared.

I’d brought two of his novels in my trusty oversized bag. So did a lot of other people. Like–maybe a thousand? The line to his signing booth was actually three lines that stretched almost the width of the mall. Even though Mr. Hosseini stayed on signing long after the scheduled half hour event was over, hundreds were still in line. I was faced with a dilemma. Surely the experience of getting a book signed–with so many people waiting–would be reduced to a few seconds, and a quick scrawl. There could hardly be a chance to mention how much I loved his books, let alone have a brief conversation. 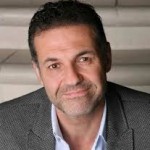 But we’d come to the book festival to see writers and hear them talk about their books. We would have a rotten time, if we just stayed in a line and never had a book signed. After 45 minutes in the Hosseini line, I moved to plan B and went to see the author-journalist Fred Hiatt and the young Chinese-Canadian human rights activist Ti-Anna Wang discuss Hiatt’s young adult novel, Nine Days. There was a crowd of over 100, but still extra seats in the Special Programs tent. The author and activist presented; the audience offered thoughtful questions which were answered at length by Mr.Hiatt and Ms. Wang. This book talk ran as smoothly as the soft serve ice cream being vended on the mall.

I ducked out of this event ten minutes before it ended, because I was concerned about getting a seat at Khaled Hosseini’s talk, which was scheduled to start at 4:35 at the fiction and mystery tent next door. Already I could see a ring of people standing around the tent, which had several hundred seats already filled by an audience enjoying a presentation by Mark Helprin. But when the Helprin talk ended…hardly anyone got up and freed seats. It turned out the Hosseini fans were already there, staked out. The hundreds of standing readers tried to press in to be close enough to see the podium–but could not. Festival staff begged people not to fill the aisles, or lean on the tent posts. I was left along with many others behind a standing room only crowd ten deep. Although Mr. Hosseini and his interviewer, the reviewer Maureen Corrigan, were supposedly seated on a raised stage within the tent, the only person I could see onstage was the interpreter for the deaf. A very attractive and tall woman–but not Khaled Hosseini.

OK. Staging a signing for someone who’s stayed on the New York Times bestseller list for the last ten years straight is a challenge. But placing him in a tent with a few hundred seats is tantamount to offering a free Robin Thicke concert in a high school gym. Khaled Hosseini crowds cannot be fit into any size tent. They need an open space about the size of a soccer stadium. This event should have been set up in front of the Lincoln Memorial?

In the course of publishing eleven novels, I’ve had a few big signings too. Not a thousand readers or more than 100–but many dozens at book launches in my two hometowns, Minneapolis and Baltimore. Yes, such crowds are flattering, but it’s just as sad for the writer as it is the reader not to be able to see each other. Writers feel a lot of guilt knowing the investment in time, travel, and funds that the readers have made to come to a signing.

I think Mr. Hosseini felt the same, judging from the first comments he made in the tent, which were blessedly amplified by a microphone. He thanked everyone for coming. He marveled at the turnout. But ultimately, he was impossible to see…and there were technical problems at the camera area, behind which I was standing. In the end, the technical team’s troubleshooting was so distracting–as were the texts from my daughter, who had become separated from me–that I bagged the event.

It wasn’t a total loss. I love the energy and diversity of D.C. That Sunday, I had a good conversation while waiting in the line with another Hosseini fan. But I wondered how many of the thousand fans I saw have a regular chance to attend author events. Publishers are cutting back on signing tours, and bookstore owners are sometimes loath to host authors who aren’t gigantic names. Both these factors compromise the magic of the time a reader meets a writer–ideas are exchanged–and books are signed, becoming treasures.

Later this week, I’m participating in a book festival, Fall for the Book, run by George Mason University. The events are spread out, over the course of two weeks, in many different halls and bookstores. Interestingly, this festival has been named as one of the best in the country. It may not the National Book Fesitval, but I’ll make a wild guess that there will be seats for everyone who wants to come.

4 thoughts on “Close enough to hear, but not to see”