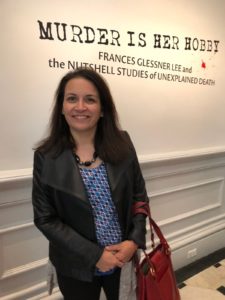 Dollhouses have a shelf in my life. I played with dolls and miniatures for a very long time—longer even than my little sisters. Our house had a tall, narrow built-in bookcase on the second floor landing, and I set up rooms for my tiny doll family on five “stories.” These went from kitchen to living room, dining room to bedrooms. The coup de grace of a Victorian bathroom with pull chain toilet and free standing china tub. I could play “A Little Princess” or “Borrowers” or a story of my own devising.

While I made doll clothes and tablecloths and tiny books, the home was furnished mostly with dozens of very fine wooden and porcelain furniture pieces, a long-term loan from a kind neighbor. These beds and sofas and dining cabinets dated from probably the 1940s and ’50s and were often in the nostalgic Victorian or Colonial style. Was it the dollhouse that gave me an appreciation of antiques? And was the art of playing family stories set in the past practice for later writing historical and mystery novels? 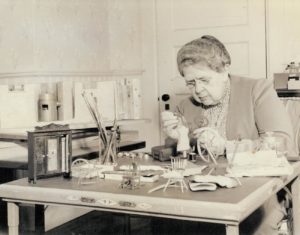 Frances Glessner Lee, born in 1878, also loved dollhouses. But she transformed a picturesque child’s hobby into a dark art. Her miniature rooms are the center of a magnificent show currently at the Smithsonian’s Renwick Gallery in Washington, D.C.

Frances’s path to her gory, tiny rooms was utterly original. She was a lady of privilege, the only daughter of the industrialist John Jacob Glessner, who owned the International Harvester agricultural and construction machinery company. Frances and her brother were tutored at home; he attended Harvard, but her parents denied her the chance for higher education due to her gender. It was a sad, too familiar story.

Some of the activities that filled Frances’ time as a girl were making dolls and miniatures and reading the novels of Sherlock Holmes. Her marriage to a lawyer named Blewett Lee was unhappy; she wanted much more than life as a society wife. Frances appreciated the central concept in Sherlock Holmes stories about clues being essential—and often overlooked. But her husband didn’t want her to pursue the forensic pathology work that she spoke about learning. The couple divorced, and her parents dissuaded her from trying to enter the field.

But Frances didn’t give up. After her brother died, she had access to her inheritance and used some of it to endow a brand new department of Legal Medicine at Harvard. She realized this could be a venue where she could contribute. The school was named Magrath in recognition of her lifelong friend, the doctor George Burgess Magrath, a coroner who was on Harvard’s faculty. Her idea was to take a crime, create a tiny room filled with a victim and clues, and let police and coroners study it for their own education.

Frances and Ralph Moser, her estate’s carpenter, spent between three to six months fabricating a “nutshell,” as she called these incredibly detailed dollhouse rooms. To make the piece known as “Barn,” Ralph was directed to shave pieces of wood from an aged shed on her property and put them together to be the barn’s boards. Frances knit tiny stockings using straight pins and recreated tiny newspapers by hand. 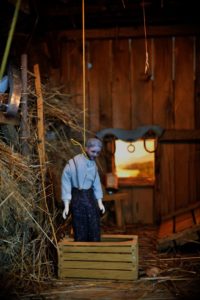 All the ideas for the crimes presented were hers, and often featured women at risk in domestic situations, and the poor and working class. Her dollhouses show the real world of the United States between the thirties and the fifties. Some of them are still used by the Baltimore Police Department for training.

I visited the exhibition over the Thanksgiving weekend, and it was packed with viewers, young and old, peering in at the lit-up nutshells. The line went out the door, the show was so popular. It was heartening to see a woman like Frances appreciated after her death. In her late years, she was the inspiration for some fiction by her friend, Erle Stanley Gardner. She also is said to have been the model for Jessica Fletcher in the television show “Murder She Wrote,” although Jessica was a writer, not an artist.

The exhibition, “Murder is her Hobby” runs through February 2018 and is well worth a peek. If you visit the Renwick’s web page about Frances Glesser Lee, you can take a virtual tour and also hear a podcast about the show. 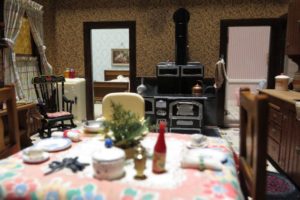 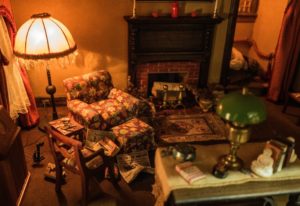 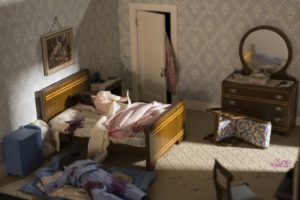