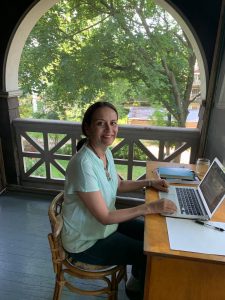 I was home for a short week between book tour traveling, and the main thing I realized was how delicious it felt to be home for spring.

The more common wish in America is to be “home for Christmas.” But Maryland’s shining moment is spring. It is a long, fruitful, blossoming season. It starts in February with crocuses, continues with daffodils and forsythia and hellebores in March, rises to tulips, azaleas, plum and cherry trees in April, and rioting roses everywhere in May and June. Maryland is not one of those places that suddenly switches to summer—it’s a very slow, enjoyable process, whether the plants are native or adopted.

It is fun for a garden enthusiast to spot gardens in  Arizona, California, Wisconsin and Washington, but I feel an urgency to get back to my ragged garden, which is only growing more outspoken every day. My husband only has so many hours in his day, so I sent out an SOS for help. I was very lucky to find a local gardener to take care of the six or so old rose bushes in the back and also attack the weeds. So when I come home, I feel pleased, rather than defeated. 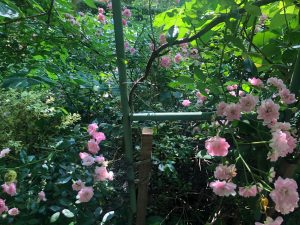 During my time home I also did a lot of daily writing. It’s inevitable that these two loves, garden and book, coincide in the spring.

I believe a lot of writers like to garden. Tending flowers and writing books are quiet, meditative processes that each involve creation and reshaping. Both are hard and take years to get results. And often, an interest in gardens can begin no matter what kind of place you grew up in, because of books.

Did you read The Secret Garden by Frances Hodgson Burnett? I read this famous 1910 serial-turned-novel set in Yorkshire when I was a third grader living in snowy Minnesota. My mother had not yet started her odyssey into passionate gardening, so I knew nothing about gardens except for being charmed by the wildflowers that edged our paths, and climbing the sprawling old apple tree with bird-pecked fruit to read a book. I probably read The Secret Garden in that tree. 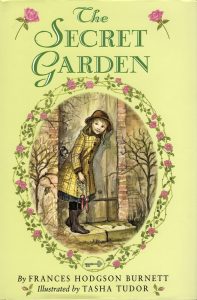 Many years later, I live in my own old house on almost an acre, which is a big lot for a house inside the city. In a few ways, it is similar to the garden experience of the fictional Mary Lennox. One certainly has to chop, tear and pull what is overgrown, but then come surprising discoveries.

Here’s one. Under a rectangular expanse of weeds that rise to happy heights every summer, there is an actual cement floor about twenty feet long by ten feet wide. It’s likely that it once was the foundation for a garage. And there are neatly paved paths throughout the garden, mostly covered by a thin layer of earth and lovely moss. 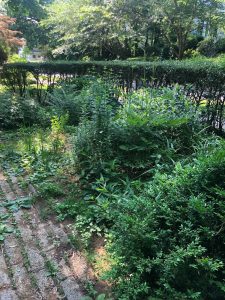 I love the moss and plants that belong to Maryland. The native plant garden I put in three years ago in the front of the house is growing so vigorously that birds have decided to secret themselves in a thicket of four-foot-high black-eyed Susans (which won’t flower until August). Daisy, the little Yorkie-Cairn terrier who lives with us, realizes the birds like to go there, so the rudbeckia forest has become her number one spot for exploration every time she goes out. As Daisy charges in, there is an explosion of feathery action. So far, nobody’s been caught! 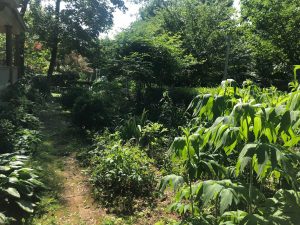 During the brief time I was home, I worked on Perveen 3 in fresh air with the sun on my face. This is entirely possible because we have an outdoor sort of room on two sides of our houses: screened porches attached to bedrooms, in the event it is too hot to sleep inside.

I have seen photos of old sleeping porches fitted out with enough cots so the whole family could sleep in air that finally turned cool. I imagine all the story telling that went on, finally quieting down so the go-to-bed soundtrack would be left to the crickets. In those days, there might have been a nighttime call from a train, not drag-racing cars. And the wake-up alarm would have been birds.

Writing on our second floor porch is a sacrosanct ritual starting every May that lasts through September. I’ve set my porch with a vintage wicker chaise for reading and sleeping, a table for eating and writing, and a cheap old desk that faces tall trees where I stare at squirrels when I’m bored. The dogs stay with me, looking down two stories to the lane behind the house. They enjoy the power that comes with being high up and feel invincible from the wrath of those they bark at.

When I first moved into my Baltimore home, a few people suggested glassing in the sleeping porches in order to have more bathrooms. The suggestion was never taken seriously. I would never want to lose the joy of being outside-in that the porch provides. I hope whoever takes over the house after I’m gone feels the same.