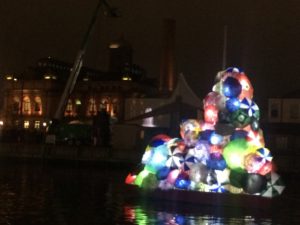 Thousands of cherry trees blossom every spring in Washington DC, a tradition spanning 105 years. At the same time, brilliant light sculptures and art installations glow along the port promenade in Baltimore. Two festivals I’d never experienced drew me away from my work. Which festival first? 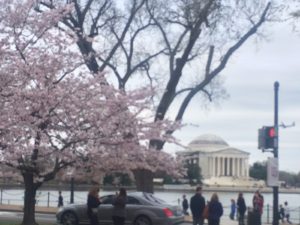 I started out on a gray Thursday morning toward Washington DC, hoping rain wouldn’t come. It was my wedding anniversary, and my husband Tony and I had taken the day off. The traffic gods were kind and the car reached the cherry blossom zone just an hour after leaving Baltimore. We strolled from the parking garage to eat ceviche and amazing tacos at a fine Mexican restaurant, Oyamel, owned by chef Jose Andres. We visited the Building Museum and National Portrait Gallery, spending not enough time because we wanted to reach the nearby cherry blossom trail.

The DC cherry blossom festival has quite a history. The trees would never be there, if it weren’t for a woman’s persistence. Bringing Japanese trees to Washington DC was the idea of a globe-trotting journalist, Eliza Ruhamah Scidmore, who fell in love with Japan’s signature tree when she was touring the East. Starting in the 1880s, Mrs. Scidmore lobbied the US government for 24 years with her idea of a mass transplantation of Japanese trees to beautify the new parkland in the city that had been reclaimed from the Potomac. 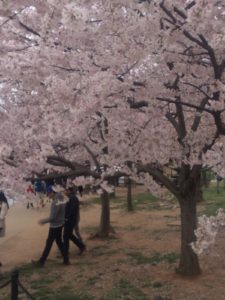 She had no luck until 1909, when she found a fellow cherry blossom enthusiast in David Fairchild, an Agriculture Department official who’d transplanted Japanese cherries to his own home. However, the government only agreed after Eliza reconnected with an American lady she’d once met in Japan. As the nation’s new First Lady, Helen Herren Taft got the cherry tree plan in motion. 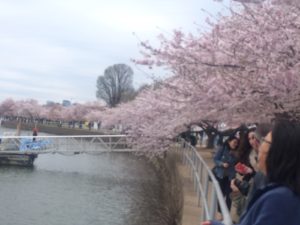 However, the first 3000 trees sent from Japan in 1911 were never planted During their shipment, they fell  victim to insect infestation. The only thing that could be done to keep the environment safe was to burn them all. Still, the Tokyo government, and a Japanese chemist named Jokichi Takamine, were willing to send 3020 more trees the next year. This group of healthy trees took root and flourished, even through World War II, when Japan was an enemy and the trees were referred to as “Oriental cherry trees” in the hopes of avoiding their destruction. 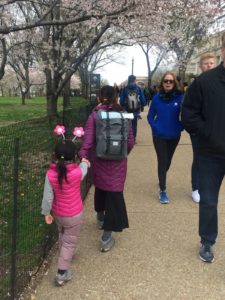 Cherry trees typically live 40 to 45 years, so the trees one sees today are not Eliza’s trees. But they are splendid indeed and provide a fairyland feeling when you stand underneath. It was delightful to be walking in the cherry fairyland, rather than being trapped inside one of the many giant tour buses circling around. I was also pleased that the parkland hadn’t been overtaken with more sales vendors than usual. The photo-snapping crowds made me recall Japan’s “Hanami,” a special cherry-blossom viewing time that inspired The Flower Master, my mystery novel set in Tokyo’s flower arranging world. 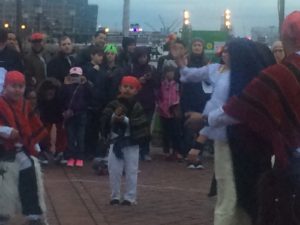 The day after our DC excursion, the rains came. And this slowed the beginning of Baltimore’s Light City Festival, which was set to run for 9 days for the second year in a row at Baltimore’s Inner Harbor. Brooke Hall and Justin Allen, a married arts-and-marketing couple, came up with the idea of a new festival that would bring the arts to the heart of the city. They did their research and crafted a proposal for a spectacular walk filled with lighted sculptures and entertainment. Fortunately, it did not take 24 years to get the Baltimore Office of Promotion to agree to fund Light City Baltimore. 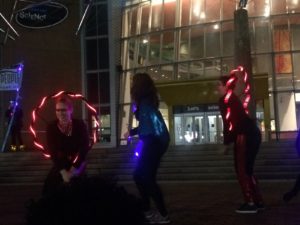 Then the fun began. Artists from many states and countries vied for placement in a very challenging venue—as several of the electric installations are in the harbor’s waters, and all the pieces were subject to high winds and rain at various times during the nine-day festival period. It’s one thing to have your art in an international show—it’s another to realize doing this outdoors could cause its destruction. 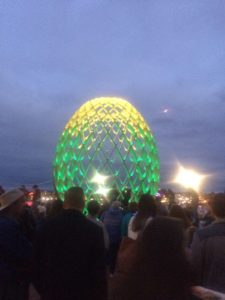 The Saturday night we went to Light City Baltimore was the rain date for the delayed opening celebration, with a full line-up of musicians, dancers and magicians. The harbor promenade was edged with vendors selling food and drink, and harbor restaurants and bars were packed. There was a great sense of energy and happiness. Some artists were on hand to explain their work, and other art works were open for exploration, including a field of bright dots, an illuminated see-saw, and a lighted rickshaw with a glamorous Chinese lantern. Among my favorites were a floating installation of 400 umbrellas and an illuminated honeycomb. I’ve been to a lot of festivals over 25 years in Baltimore, and this was the most spectacular. 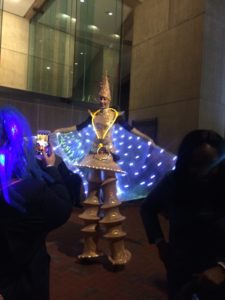 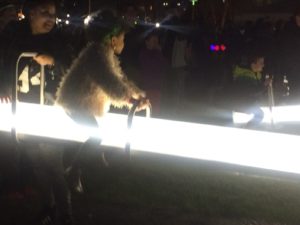 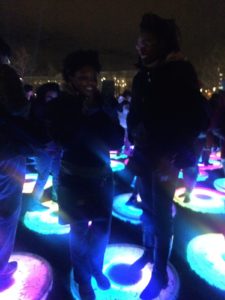 As I came away from the festivals, I had two thoughts. The Japanese cherry trees were brought to beautify a fledgling city that has subsequently prospered. And the lighted art walk illuminates an old city trying to recast itself in its fourth century. 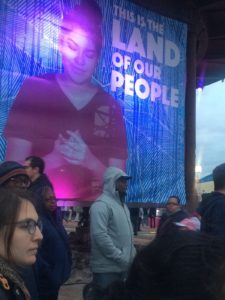