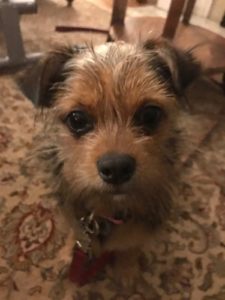 I thought I was done with babies fifteen years ago. But there’s a baby in our Baltimore house again—a fur-baby. 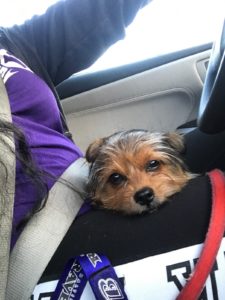 She arrived by car!

The adventure began when my college student daughter was scrolling Facebook and found a frantic post from a woman overwhelmed with four children and two dogs. The smaller dog was a winsome puppy who was too hard to train. My daughter bought the dog and had it headquartered at a friend’s place. The two of them named her Dazy. In our house, she became “Daisy.” 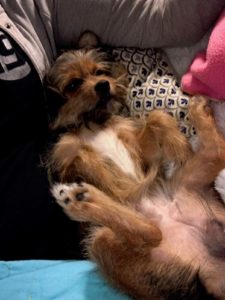 What the hell is this little animal?

Daisy is an odd looking scamp—sometimes I think she looks more like a weasel or fox than hound. Some have said she looks like a Wookiee from Star Wars, but I don’t remember Wookiees. Chewbacca? The dog appears to be a Yorkshire terrier mix, with the addition being perhaps Chihuahua or something else. She’s about ten months old, weighs a tad more than 8 pounds. 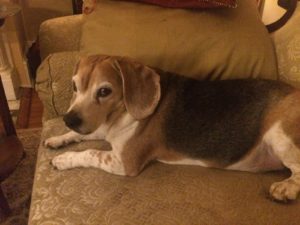 Charlie is the canine patriarch

We did not appreciate our daughter buying a dog, even if she was ostensibly bunking somewhere else. We already had a beloved dog—an elder statesman beagle. Charlie has three jobs: firstly, sleeping on the couch; secondly, writer’s muse, and finally, the harbinger of any suspicious dogs passing the house. Given his solitude and set routine, we didn’t think a 12-year-old gentleman would like a high-spirited puppy running around. We expected snarling or avoidance. 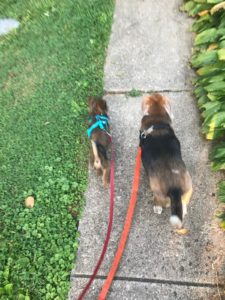 From the moment he met her, Charlie fell in love with Daisy—perhaps because she’s female, small and cute. Daisy is non-dominant and very affectionate, but she sometimes shows her jealous streak, trying to cut Charlie off when he heads for the comfort of my lap. Her best trick is to begin barking at the side door, which causes Charlie to jump down from the couch to run and defend the household. Once he’s vacated the couch cushion, Daisy gracefully jumps into it. 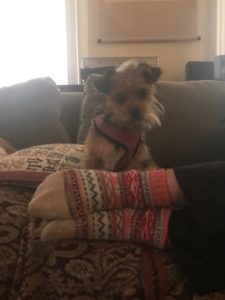 This is to show scale!

Over time, the big boy and the little girl got to know each other beyond the pretty faces. Daisy began spending whole weekends here when my daughter was busy. After the friend lost housing and became an ex, Daisy moved in with us for the duration. We are working with a dog trainer on walking and other important behaviors, but it seems that Daisy’s working equally hard training us. We sound like idiots now. “She’s done both numbers!” is the victory cry I make during a good morning or evening. There is a lot of walking going on—yes, it cuts in on writing, cleaning and bathing—and also lots of throwing of chew toys.

Sadly, Daisy’s idea of a really good chew toy is a mahogany dining table. Bitter Apple spray only dissuades her temporarily. She’s a lot of work, but she has taught Charlie to play like he’s young again. The sight of them tangling together with gentle grunts is as sweet as when my human children played Legos. 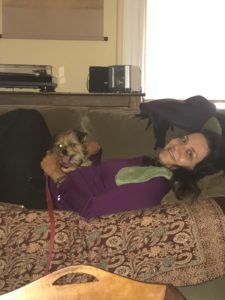