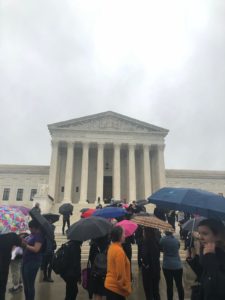 “Wear all black,” the woman said over the phone.

Come at eight-thirty, and don’t carry too much.

Be prepared to go from the Supreme Court of the United States to the offices of senators. 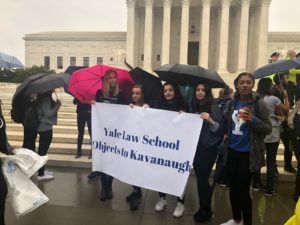 Last Sunday, I learned the Women’s March organizers were a series of actions this week in Washington D.C. I wanted in. Over the last two years, I have been increasingly agitated by the attempts by male lawmakers to erase established civil rights, especially those of women and minorities. It feels like the final straw that the President’s nominee for an open seat on the U.S. Supreme Court is Brett Kavanaugh, a conservative judge alleged to have sexually assaulted a young woman during his high school days. Despite the fact that more claims have come about the judge’s sexually aggressive behavior, the President and most Republican senators don’t want an F.B.I. investigation or to postpone voting for Kavanaugh’s confirmation. 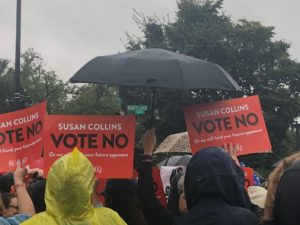 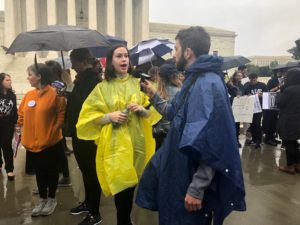 President Trump and his supporters insist Chrstine’s report must be false, or else it would have been told to the police years ago. But I know that many women who do report rapes have their stories ignored or suffer repercussions for telling.

Dr. Christine Blasey Ford is a psychologist now living in California. She says that when she was fifteen, a teenaged Kavanaugh and his friend, Mark Judge, forced her into a bedroom at a party. She claims Kavanaugh put his hand over her mouth so nobody could hear her cry out for help. The men fell off her, and Christine did escape being raped, but she suffered post traumatic stress disorder. Christine moved 3000 miles away to get away from her painful memories, which she had discussed with others over the years, but that became increasingly hard to ignore when Kavanaugh came onto the national stage. Some months ago, Christine wrote a letter about her experiences to her Senator, California Democrat Dianne Feinstein. Christine asked Feinstein to keep her identity confidential but to share Kavanaugh’s past actions with the F.B.I. However, information was made public, and now Christine has received death threats and left her home. 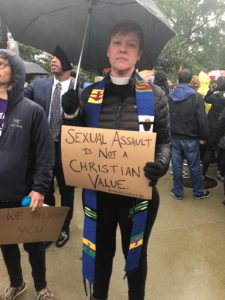 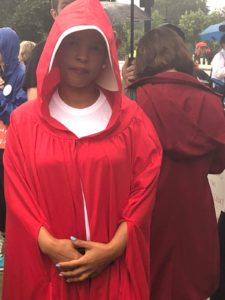 I am grateful to live close enough to Washington D.C. to reach it in an hour’s train ride. I wanted to make a physical declaration that I believe women don’t make up stories about rape. I followed the instructions the woman had given me to assemble in front of the US Supreme Court on a gray Monday morning. Rape survivors among the marchers spoke about who hurt them and how the trauma still affects them. Some of their voices were very low, because the emotion was strong, and it was the first they had told these painful histories. After each story, our voices swelled in answer. “We believe you.”

The rally started out with a few hundred people, but as we marched to the Hart Senate Office Building, the numbers swelled. Long lines of cars had to stop to let us cross the intersection, and by the time we reached Hart, it seemed like close to one thousand were marching. There were so many marchers, we had to divide up to make it into the building through two different sides. Because we had no bullhorns, messages passed through the crowd by repetition. When people in the line began holding up a hand, it meant it was time to fall silent and listen for directions. 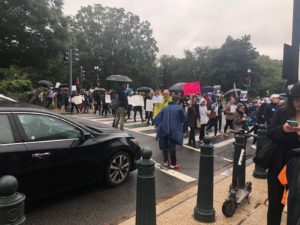 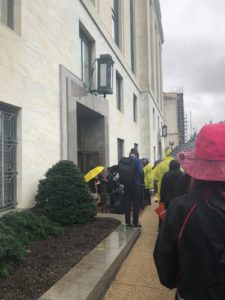 In the Hart and Dirksen Senate Office Buildings, the police were already waiting and had stiff plastic wrist bands, the modern version of handcuffs. While it is legal for people to enter a building to visit a senator, the police told us that it is against the law to protest inside government buildings. 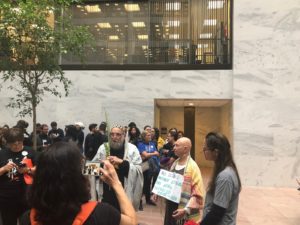 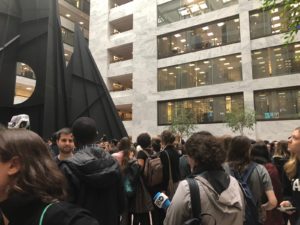 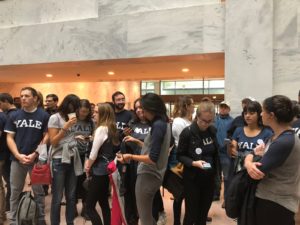 In the atrium, some people prayed and many others got to know each other. I met many students from Yale Law School, the alma mater of Kavanaugh, and women and men from all over America. The organizers divided us into smaller groups that lined the halls outside the offices of Republican Senators Susan Collins and Jeff Flake, as well as some others who might be swayed to vote against Kavanaugh.

I was unable to get inside any of the senators’ offices, but the people who did spoke to the senator’s staff about how the experience of rape impacted them. I did not know that during the same time, other rallies were being held around the country, that many women were wearing black as a sign of protest, and at 1 PM that Monday, many women would walk out of work for an hour to show they believed Christine. 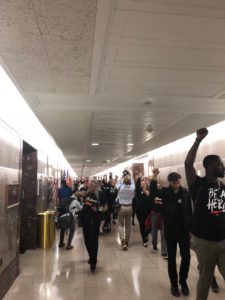 At the Senate Buildings, 128 people were arrested in Dirksen and the Rotunda. The rest of us made it out.

As I walked through Capitol Hill, I caught sight of a protest sign about the nomination of Brett Kavanaugh on a food truck, making me realize that people are creatively speaking their voices. 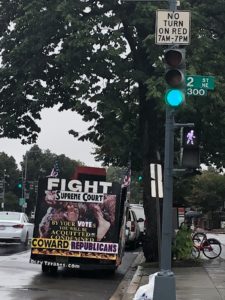 It was still raining when I reached Union Station, and my thoughts went back to my own social history. Christine and I came of age at the same time, and there are several uncomfortable experiences with men I’ve pushed very far back into my memory. Three decades ago, I believed that if I got away from someone without being hurt, I should consider myself lucky. Why should there be a consequence for the perpetrator?

In my Perveen Mistry series, I write about a woman solicitor battling for social justice for females constrained by the legal system in British colonial India. A century later, it is shocking that so much is still the same.