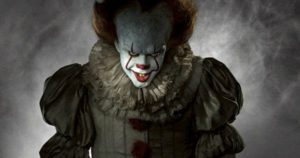 As noted recently in The Washington Post, now is a bad time to be afraid of clowns.

Because they are everywhere.

Pennywise the Dancing Clown features in the film It, based on Stephen King’s famous book. And when I tuned into the FX program American Horror Story Season 7, I found more than one very twisted, homicidal clown. Later this year, a film called Behind the Sightings releases that is inspired by alleged menacing clown appearances in 2016.

This coming Saturday, September 15, 2017, clown-styled people will be gathering to protest in Washington, D.C. These self-described “Juggalos,” who first organized in appreciation of a band called Insane Clown Posse, are protesting their classification as a gang by the FBI and US Department of Justice. The Juggalos claim that people with Juggalo clothing, makeup and paraphernalia have gone on criminal watchlists, lost jobs, and more. After looking at their photos, it appears most of the Juggalos are not in full clown drag, but enjoy elements of clown makeup and clothing.

So when did clowns become frightening enough to get the government involved?

It seems a journey centuries in the making. Early clowns appeared in Europe and Asia as court jesters or buffoons. They were mainly jokers and not necessarily dressed to obfuscate their identities. These clowns played a role in government—not just to entertain royalty and their visitors, but to sometimes provide inside information. Then came circuses—with exotic animals often led by trainers in clown costumes, and clowns onstage and in parades and at children’s parties. A clown seemed like shorthand for fun.

In the 1960s, a clown with a bright red wig became an upbeat symbol for McDonald’s hamburger chain. Ronald McDonald, and a small cast of cartoonish friends, were designed to make children beg their parents to stop at the restaurant’s trademarked Golden Arches. 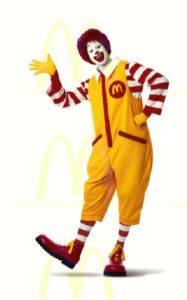 This corporate action is striking, because Ronald McDonald houses provide overnight shelter for the families of sick children are all over the United States—sometimes for weeks at a time. And inside many hospitals, amateur and professional clowns regularly visit children on the wards. The World Clown Association supports traditional clown work in circuses and in parades and service activities aimed at military veterans and senior citizens. They have spoken against nonprofessionals using a clown image to frighten the public. 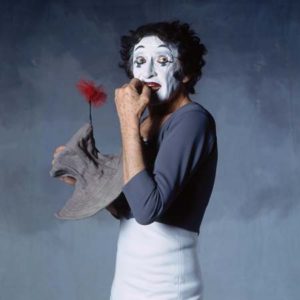 I don’t suffer from fear of clowns, which has a formal name: coulrophobia. I grew up of age when clowning was highly popular, and in fact evolved into a huge 1970s fad for mimes with beautifully painted faces. The greatest pantomime of all, a Frenchman named Marcel Marceau, performed in white face. Seeing a picture of Marceau in his skinny outfit with top hat and fabric flower triggered pleasant memories for me.

I grew up to witness my own children’s natural discomfort with people covered up in outsized costumes, whether they were familiar Sesame Street characters or clowns. I get it. If you see someone who doesn’t have the skin or hair or hands of a person, and whose face is fixed into a false, colorful grin, your brain registers alarm. A face that doesn’t react with empathy or other expressions feels unsafe.

I imagine that the people who dressed up as clowns and appeared near playgrounds and on the edges of woods in 2016 and other recent times enjoyed carefully putting on makeup and costume and becoming something unrecognizable. There is a real power when one transforms the everyday appearance.  If you’ve ever changed your appearance for a wedding, dance, job interview, military occasion or religious event, you may have had this feeling of becoming bigger and bolder than your usual self.

Former Trump advisor and current Breitbart News executive chairman Steve Bannon labeled white supremacists as “clowns”—notwithstanding the fact that many of these so-called clowns are followers of his right wing website.

The irony is that on Saturday, Sept. 16, Trump supporters will rally on the Mall in Washington very close to where the Juggalos have their permit. Any resulting interactions may become a circus—but I doubt there will be happy laughter.