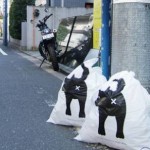 That’s what I said the first time I heard about “gomi-picking” or “gomi-hunting.” Apparently one night each month, in neighborhoods all around, Japanese residents set out used furnitures, TVs, stereos and the like to be collected by garbagemen (so they believed) while the real collectors were…eager foreigners.

Funny how the Americans living on tight military salaries noticed these TVs sitting for the asking. And they went for it. Gomi-picking expeditions turned into dinner party stories. Remember the time Jack drove two blocks and came back with two TVs? The time Donna got a CD player for her kids and a stroller? The best story of all was about the faux leather massage chair, still vibrating after all the years.

Big garbage memories hit me like an overloaded contractor bag the other week. I’d held a yard sale resulting in very few items sold (although, it must be said, a woman showed up who said she would like to buy the house). That would take time to come to fruition, but in the meantime, I still owned too many books, kitchenware, clothing, toys, furniture annd sporting equipment.

A friend suggested I call the Salvation Army and arrange for them to pick up the leftovers. I did this. Because my front yard is up a steep flight of steps, I decided to carry everything down to the grassy strip next to the sidewalk in front of the house. The Salvation Army dispatcher said it would be easier for the driver.

By the time I’d finished putting out the gomi–on a fine, sunny Monday, with the pickup scheduled for the next day–I met a young woman who looking interestedly at the many baskets I had heaped together. “These would be nice for my church!” she said. What else could I say but, “please take them?” She did–and the bamboo screen that has dogged my basement for years.

A few hours later I saw another unknown person standing by the pile, using a cellphone to call someone about the goods. And then, a few hours later, there was a truck, and a man excitedly looking through everything. “I’ll pay whatever you want,” he said, “But some of these books would be great for my kids.”

And so it went. Perhaps a few dozen people stopped by the gomi pile, taking what they wanted. It felt really good to know people wanted these things! After one night, the gomi pile was maybe 1/5 gone; still plenty left for the Salavation Army, I thought as we packed up to leave town on a short family vacation. When we returned, though, plenty of gomi awaited. Big storms had scattered it across the grass near the sidewalk–making us look like the worst neighbors.

Sadly, I packed up the leftovers into my trash cans,wishing this had been Japan and there was a base nearby with enthusiasts who would have gone for everything on the first night. Or would they? A mishmash of books and textiles is hardly comparable with a massage chair. That was probably the problem; my gomi wasn’t high end enough.

Next time, I’m listing it all on Freecycle. And that time might be sooner than later. As we unpack our boxes at our new house, we’ve discovered inherited trash in the crawlspaces underneath the porches. What was left for us ranges from empty beer bottles to remnants of wood and decomposing shag carpet. My husband has worked many hours, wearing a respirator, removing this smelly, wet horror show, which was probably also the reason we had about a hundred times more mosquitos on our property than anyone else in the area. A hauler’s coming Friday; $50 seems a small price to make our big, bad gomi pile go away to the landfill.

Because nothing’s ever really gone, is it? It just moves to another place.