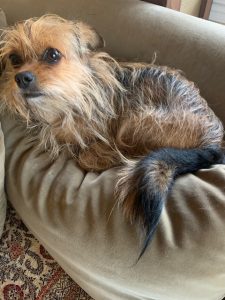 Daisy, what do you think?

Less than 40 miles from here, some big dogs moved into a big house.

Two German Shepherds. The old one, at age 12, is a fellow named Champ, and the younger one, Major, is two. Major had been left by his previous owner at an animal shelter in Delaware. After President Joe and Dr. Jill Biden adopted him, he’s now the nation’s second dog, or perhaps vice-dog? Champ, with his years of experience, is clearly Top Dog. 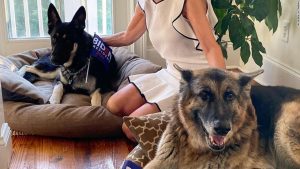 Stop your kvetching. Yes, Champ and Major are show-off, macho names. However, a flower name like yours seems incongruous. What’s that? You worry they look like they’re partly wolf? There’s controversy over whether wolves were bred into the German Shepherd community in the late 19th century. It might be. But remember, all dogs, large and small, are descended from wolves.

In any case, shepherds are intelligent, loyal, and protective—just like Yorkshire terriers, but at upwards of 80 pounds. They are working dogs, often used on farms and with the military and police.

Oh, so now you’re bragging about your own working dog origins. It’s true that Yorkshire terriers were originally used to catch mice in the mills and factories of England. However, the last time that you were in the room with a live mouse, I was yelping, and you were sleeping.

I understand that the arrival of Champ and Major at the White House makes you nervous. And while I’ve met some great German Shepherds, some have been a bit more mouthy and assertive than made me comfortable. But I haven’t heard anything crazy about these dogs. I believe the Bidens can shepherd these Shepherds.

You’ll be fine, Daisy. We aren’t going on a march in D.C. to protest these newcomers. And don’t ask me for my credit card number. Move On is not taking contributions to fight for your cause.

And I promise, even if I do go to the White House someday, I won’t pet them.